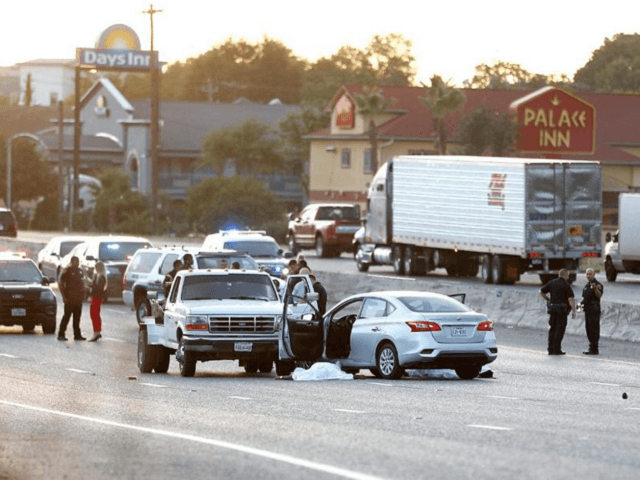 The Navasota Police Department and special agents from the Bureau of Alcohol, Tobacco, Firearms, and Explosives (ATF) arrested Erick Diaz-Aranda, a 29-year-old Mexican national on Saturday, federal officials told Breitbart Texas on Saturday. The arrest is reportedly in connection with a Thursday-evening rush-hour shooting on the East Freeway in Houston.

At approximately 6 p.m. on Thursday, a shooter got out of his car on the East Freeway in Houston following a collision with another car, Breitbart News’ Joshua Caplan reported on Friday.

The shooter began firing what a witness described as an AR-15-style rifle on the car as he walked around to the front of the vehicle, the Houston Chronicle reported. Another witness who said he believed the shooter might open fire on him, pulled his own gun and fired at the shooter. The shooter then allegedly got in his car and fled the scene.

Police described the shooter as a Hispanic male in his early 20s. Officials described the victims as ages 25 and 33 and said they found marijuana in victim’s car.

Houston Police Chief Art Acevedo tweeted on Friday there was a “high probability the murders are drug related.”

On Saturday, police officers in Grimes County, with the assistance of ATF agents, arrested Diaz-Aranda on charges related to the Houston freeway shooting, according to information received by Breitbart Texas.

Court records obtained from Harris County (Houston) by Breitbart Texas revealed Diaz-Aranda has a criminal history that includes at least one felony conviction and one misdemeanor conviction. The suspect’s criminal history goes back to 2007.

Murder Charges are expected to be filed in connection to Diaz-Aranda’s role in the alleged Houston freeway shooting. He could also face federal charges for illegal re-entry after removal.

“Depending on an alien’s criminality, an alien who re-enters the U.S. after having been previously deported commits a felony punishable by up to 20 years in federal prison, if convicted, a U.S. Immigration and Customs Enforcement official previously told Breitbart Texas. “By placing the immigration detainer, ICE seeks to take custody of aliens if they are released from local custody for any reason (e.g., post bond, charges dropped or released on their own recognizance).”

Diaz-Aranda is reported to be in the custody of the Grimes County Sheriff’s Office pending transfer to Houston.

Breitbart Texas reached out to the Houston Police Department for additional information on the suspect and the case. An immediate response was not available.

Share This Post
Like it? Vote it up!
00
Previous ArticleBiden Says He Was VP After Parkland ShootingNext ArticleThe Work Started in Ferguson Is Far From Over
You May Also Like
Jeff Bezos Escalates His Fight Against Trump and the Saudis
April 6, 2019
Comey: Barr's Testimony Was 'Misleading' But It 'Doesn't Look' Like Perjury
May 10, 2019

They Were a Great Generation of Americans
December 11, 2019
Mulvaney: Democrats Will 'Never' See Trump's Tax Returns
April 7, 2019
Sanders: Abortions up Until Birth Are ‘Very, Very’ Rare – The Decision Doesn’t Belong to the Government
April 16, 2019

The Work Started in Ferguson Is Far From Over

Dorothy Brown writes that on this milestone anniversary of the events in Ferguson, it's important to note what's changed and how far America still has to go toward progress in fighting racism. Source link Veterans In Defense Of Liberty - Vidol

Biden Says He Was VP After Parkland Shooting

Former Vice President Joe Biden (D) made another gaffe Saturday, telling reporters in Iowa that Parkland students visited him – while he was vice president – in the aftermath of the school shooting, even though the incident occurred in 2018– two years after he left office. Biden brought up the ongoing