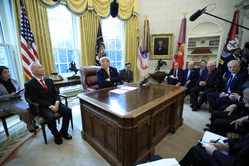 You don’t have to like tariffs to like President Trump’s strategy of imposing harsh ones on China. Those he imposed overnight are punishing, not only to China but to American consumers. The longer they last, the more they will cost. Yet serious trade sanctions are the only hope of getting Beijing to roll back its abusive economic practices and open its markets to U.S. exporters and investors.

China won’t act unless it feels real pain in its export sector, which is a powerful economic driver. And pain is what Trump means to inflict unless China provides much greater market access.

Half measures and paper promises won’t do. The U.S. wants a big deal, and it wants teeth in it to prevent cheating. To get it, Trump is willing to threaten a trade war. We don’t know if it will work.

We do know that Trump’s threats are credible. He began saying how much he loved tariffs long before he ran for office. The irony is that his protectionist stance could pave the way for freer trade, first with China and then with the European Union.

No one doubts China’s own protectionism. It uses tariffs, non-tariff barriers, and outright theft of intellectual property to support its industries and harm U.S. interests. It demands American companies share ownership, profits, and proprietary information with local partners, most with strong ties to Communist Party leaders. The U.S. market, by contrast, has been relatively open to Chinese goods and investments, which are protected by the rule of law. No such luck for Americans in China.

Enough already, say Republicans and Democrats in rare unison. They are sick of these unfair, mercantilist practices. So are global businesses, though they stay silent for fear of retribution.

The problems may be clear, but the solutions are not. No previous administration has figured out how to move China away from its discriminatory policies. Sweet talk and generous gestures don’t work. If they did, President Obama would have succeeded, not only with China but with Iran, Russia, and other hostile powers. Empty threats don’t work either. If they did, several administrations would have gotten China to change its trade and investment practices long ago.

These failed policies don’t leave Washington with many options. The U.S. can either accept Chinese protectionism, as Europeans and previous U.S. administrations have, or it can make them an offer they can’t refuse. The terms are obvious:

Trump is taking the Don Corleone option. He acted swiftly and ruthlessly when Chinese trade negotiators withdrew concessions they had already made in writing. On Friday, he more than doubled tariffs to 25% on some $200 billion worth of Chinese exports, with promises of more to come.

Trump’s decisive move is directed at China’s economy, but it also sends a sobering message to North Korea’s nuclear negotiators. They are bound to see how costly it is to make empty promises to the Trump administration, as Kim Jong Un has done on denuclearization.

No one can tell if Trump’s hard-line negotiating strategy will work. But we do know he is in a good position to try. With the United States at full employment, Trump’s approval ratings up in the mid-40% range, and the next election 18 months away, he will never be in a better position.

The key is to sustain that leverage — and convince China that America will hold out for a good deal. If this turns into an economic war of attrition, the winner will be the side that shows it can hold out longest. (Of course, both countries could lose if the standoff is protracted.)

Why try it now? That is partly China’s fault, partly Trump’s choice. Beijing forced the issue when it reneged. One of its biggest concerns, apparently, is that the U.S. actually intends to enforce the final deal. Imagine that.

Although China may be surprised at this insistence, international companies understand the problem all too well. Many have found their signed agreements are only the beginning of pushback from Chinese partners and their government backers. This standard practice is a very bad sign for America’s trade negotiators, and it underscores why they insist on strong mechanisms to monitor, verify, and enforce the terms they ultimately agree on.

The timing is also Trump’s preference since he loses leverage as the 2020 election approaches. The Chinese are certain to hit back, and, when they do, they will target industry and agriculture in states Trump needs for reelection. Pressure from these endangered economic interests is already mounting, voiced by their Republican representatives. The closer to the election he gets, the more vulnerable Trump is to that pressure. He wants a trade agreement long before he faces the voters. Waiting doesn’t help him.

Better to push now, he figures, when China is facing troubles of its own. Its economy has slowed; it is already suffering from American tariffs; and the latest ones will compound the pain. China’s industries need the American market, badly. Trump is counting on that.

What Chinese President Xi Jinping and his aides don’t know is the relative political cost of caving to Trump’s demands or resisting them. They face opposing forces within China. On one side are powerful insiders who have profited from protected markets and are fighting to keep them. On the other are local companies and workers who will be devastated by the loss of foreign markets. The downturn could add to the country’s political unrest. Even dictatorships must worry about that. They worry, too, about the effects of disruptive changes to the country’s basic economic practices. They simply don’t know what the political consequences will be.

President Trump is forcing Xi to choose between two unhappy alternatives. That’s why he has thrown a severed horse head into the bed. Trump wants to force the issue and make it hard to resist the American offer. If he succeeds, he will present the deal as a huge win for both sides.

The oddity is that if Trump manages to pull off such a deal, this victory for liberal trade will be based squarely on his troubling embrace of economic nationalism. There is no tariff on irony.

Charles Lipson is the Peter B. Ritzma Professor of Political Science Emeritus at the University of Chicago, where he founded the Program on International Politics, Economics, and Security. He can be reached at charles.lipson@gmail.com.

Senate Majority Leader Mitch McConnell on Thursday evening reiterated his edict that the case is closed when it comes to Russia, choosing not to publicly back a rogue subpoena from Senate Intelligence Committee chairman Sen. Richard Burr (R-NC) when offered the opportunity by Fox News's Sean Hannity. Source link Veterans In