The Marvel Cinematic Universe has reached a strange point of cultural dissonance between progressivism and fanboy disdain. Fans of the movies want politics out of the films while progressive filmmakers want to use the massive platform Disney superhero movies provide to push their messages.

As the success of Wonder Woman and Black Panther have shown, there is a market for diversity, and progressive filmmakers are prepared to use them to push intersectionality and identity politics. Disney is happy to tag along so long as they make a profit and avoid negative articles about how Whiteness is ruining their franchises.

Captain Marvel represents the first female lead film in the Marvel Cinematic Universe. In and of itself, this shouldn’t be controversial; however, the film’s lead actress Brie Larson has seen to it that the film’s promotional campaign is fraught with overt progressive jabs against white male moviegoers.

In my opinion, she’s a very talented actress. I remember seeing her in a small independent film Room in 2015 during the lead up to announcements for preproduction on Captain Marvel thinking she’d actually be an excellent lead for the film.  She carried an incredible vulnerability in that film. She was mean and tightly wound, but her emotions were the result of pressure from the horror of being a kidnapping victim suffering from trauma. I thought this vulnerability and emotion would be perfect for Marvel Studios to build a movie around. The Captain Marvel of the comic books is carved in stone, primarily fueled by her reputation as the leading lady of Marvel Comics and as such rarely gets a good showing. 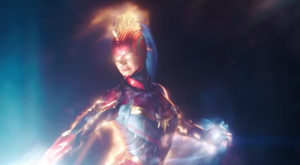 Not Bad but Nothing Special

It’s much to my surprise then that Marvel Studios has apparently missed the reason Brie Larson was a good choice for the role in the first place and emphasized the worst aspects of the character as she’s presented in bad modern comics like Civil War II. She’s stern to a fault, unrelatable, and stubborn. She’s doing the Clint Eastwood thousand-yard stare with an emotionless affectation that’s intended in the plot to be an outgrowth of training as an alien soldier.

Larson’s acting ability is wasted on a performance like this. The best moments her character has are the moments when the facade melts briefly and she’s allowed to be a jovial if hypercompetent space warrior. Unfortunately, those moments are sparse.

Captain Marvel isn’t the total train wreck that some people were hoping for. On the margins, it’s essentially on par with lower-tier Marvel Studios films like Thor: The Dark World and Ant-Man and the Wasp, which both have moderate fanbases.

Like all films in the MCU there’s a baseline competency to the filmmaking. The action choreography, production design, and color grading are as solid as ever. The film also comes bolted to the hip with tons of cameos of younger versions of minor characters from the other movies like Nick Fury, Phil Coulson, and Ronan the Accusor. Unfortunately, there’s no solid foundation to form this story on.

The only real story arc of the film is Captain Marvel’s quest to understand her identity. The story context suggests a subtext about transcending society’s arbitrary limitations, but there’s no personal growth for her character. Captain Marvel just learns about her secret past and becomes more powerful as a result of it.  The end.

A lot of conservatives and anti-social justice warriors are going into the film ready to hate it, and truthfully, the problem isn’t the film itself. The directors are on record claiming the movie is a feminist movie, but I don’t know how much I agree with that. Most of that just manifests in progressive dog whistles where Brie Larson gets hit on by male soldiers and is told she can’t keep up with her peers and to smile. They’re brief, cringy, and on the nose moments that pass quickly.

Larson hasn’t helped with the film’s lead up of course. She famously went on record saying, “I do not need a 40-year-old white dude to tell me what didn’t work for him about Wrinkle in Time. It wasn’t made for him. I want to know what it meant to women of color, to biracial women, to teen women of color, to teens that are biracial.”

Her overtly intersectional feminist comments and the air of mutual hostility between Marvel fans and Larson have fueled the intense mutual disdain.

When even progressive websites like Slate and Vox can’t find any enthusiasm in pandering to the movie maybe there isn’t much gas in the tank.

Share This Post
Like it? Vote it up!
00
Previous ArticleSix Cartel Gunmen Killed in Fight with Mexican Military near Texas BorderNext ArticleDem Rep. Cohen: 'Trump Is a Cancer on the Country'
You May Also Like

Trump’s Grotesque Coda to the War Against ISIS
October 10, 2019

Why Brooklyn's Trendy Brand of 'Socialism' Is Doomed
March 10, 2019
Assault on America, Day 92: Why Conservatives cower in shadows at today’s liberal colleges
April 4, 2019

Dem Rep. Cohen: 'Trump Is a Cancer on the Country'