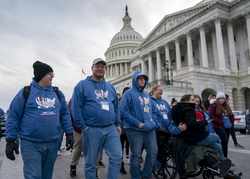 Ronald Reagan didn’t go; neither did George H.W. Bush. Even George W. Bush couldn’t make it. Those collective no-shows mean that on Friday Donald Trump will become the first president to speak in person at the March for Life, the marquee anti-abortion demonstration in the nation.

The address will be historic but also slightly ironic: A thrice-married politician from New York is now widely considered by many on the religious right to be the most pro-life executive in history. What’s more, according to  Family Research Council head Tony Perkins, Trump “has forever changed the standard by which Republican presidents will be evaluated.”

Republicans have relied on pro-life voters to faithfully support their ticket for decades, and so does Trump. But after remaking the Grand Old Party in his image, he adopted their cause and brought its leaders into increased influence in his administration.

“He fundamentally changed the nature of the party,” said Richard Land, president of the Southern Baptist Convention’s Ethics & Religious Liberty Commission and a member of Trump’s evangelical advisory board. “His nomination was a hostile takeover of the Republican establishment — there is no other way to put it. The number of noses that were turned up at Donald Trump were bounteous.”

Religious voters were more sympathetic, and evangelicals overwhelmingly sided with Trump in the last election. He has rewarded their faithfulness on social issues. This White House has reinstated and expanded the “Mexico City policy,” which bans U.S. aid from going to foreign groups that promote or provide abortions, and stripped abortion providers of Title X funding. Trump has also appointed two pro-life Supreme Court justices.

“He’s the only president that has understood the power of the pro-life movement, so he acts like that,” explained Marjorie Dannenfelser, president of the Susan B. Anthony List and a former chairwoman of the 2016 Trump campaign’s Pro-Life Coalition.

There was only one thing left for Trump to do to convince these voters that their cause is now his. “I assumed that the vice president would come,” Dannenfelser said, noting how Mike Pence has spoken on stage at the March for Life in years past, “but when I got the word that the president was insisting that he be the one to speak directly to the people, I was overjoyed.”

Thousands of demonstrators will soon descend on Washington, D.C., and will likely share that reaction when Trump ticks off each of his pro-life accomplishments. Meanwhile, just blocks away, the Senate will continue its impeachment trial over allegations that the president tried pressuring the Ukrainian government into investigating one of his political rivals.

The White House gladly emphasized the president’s pro-life record Thursday afternoon as impeachment continued to consume the Capitol. “President Trump has done more for the pro-life community than any other president, so it is fitting that he would be the first president in history to attend the March for Life on the National Mall,” Deputy Press Secretary Judd Deere wrote in a statement to RealClearPolitics.

“This president is a champion for life and human dignity, and tomorrow he will personally reaffirm his commitment with thousands of other Americans marching for life,” he continued.

Many on the religious right were initially uneasy with Trump during the last presidential election. His attacks on Hillary Clinton during the third and final debate, when he highlighted her position on third-trimester abortion, removed those doubts. It was a pivotal exchange, a sort of political come-to-Jesus moment, and it worked: Exit polls showed that 80% of white evangelicals pulled the lever for Trump.

The president has taken every opportunity to sustain that faith since then, most notably after Virginia Gov. Ralph Northam embraced legislation that would have legalized abortion at any moment during a pregnancy. “Can you believe this? It’s crazy,” Perkins recalled Trump saying during a conversation in the Oval Office. “They want to execute babies!”

Days later and in front of Congress at the State of the Union, the president lit into Northam for what many described as infanticide. He condemned the Virginia legislation that allows for “a baby to be ripped from a mother’s womb” and accused Democrats of embracing the killing of “a baby after birth.”

“To defend the dignity of every person,” Trump continued, “I ask Congress to pass legislation to prohibit the late-term abortion of children who can feel pain in the mother’s womb.”

Lawmakers have not delivered — and social conservatives argue that this is more evidence of irreconcilable differences between the two sides. All of the Democrats on stage at the last primary debate, for instance, support abortion during the third trimester. “It is a stain on the history of the Democratic Party,” said Matt Schlapp, who chairs the American Conservative Union. “It has accrued to the benefit of the Republicans and definitely to the benefit of Donald Trump.”

What was greeted with praise on the right was largely condemned on the left. Ilyse Hogue, president of NARAL Pro-Choice America, publicly panned the president’s scheduled March for Life speech, calling it “a desperate attempt to divert attention from his criminal presidency and fire up his radical base.”

On the second point, social conservatives are likely to agree. The president will soon call on evangelicals and religious voters to help him secure a second term, an argument he will preview at the March for Life. Not only will he be well-received, Land insists, but Trump will also win over a larger share of pro-life voters.

“Given the current field of Democratic candidates, Donald Trump will get more than the 81% of evangelical voters that he got in 2016,” he predicted. “Many of them who didn’t vote last time have been pleasantly surprised at his performance, so turnout will be higher.”

For these voters, Trump has become an unlikely but undeniable champion of their cause.

But it is about more than turnout, explains North Carolina Rep. Mark Meadows, a close confidant of the president. He says that Trump is the boldest pro-life politician he’s seen since he’s been in Congress.

“In the face of a deeply unfair political attack, he’s still determined to stand up for the promises and values that sent him to office,” he said, before adding that “life is winning again in America and President Trump is leading the way in the fight.”

To allies and supporters like Meadows, then, Trump has become the champion of their cause — at first seemingly unlikely but now undeniably reliable.

Share This Post
Like it? Vote it up!
00
Previous ArticleTrump Is Laughing His Way Back to the White HouseNext ArticleEnd Times: One Reason Evangelicals Love Trump
You May Also Like
Ramadan Rage 2019: Jihadis Massacre 364, Injure 404 in Two Weeks
May 21, 2019
Klobuchar Pitches Herself as Heartland States Democrat: 'Look at What I've Done'
April 23, 2019
Mexico City Caves to BDS Extremists, Removes Photos of Jerusalem and Golan Heights
May 28, 2019
Stop Illegal Immigration by Ending Remittances to Mexico
April 7, 2019

The Real National Emergency Is Not at the Border
March 12, 2019

The enemies of Israel have unleashed a massive air attack on the Promised Land. Hundreds of fighter jets streak across the sky. But before Israel can be destroyed, fire rains from the heavens and the enemy jets explode in mid-air with no explanation. Hailstones the size of golf balls follow the

Trump Is Laughing His Way Back to the White House

'Nobody likes him,' rages Hillary Clinton. 'Nobody wants to work with him.' She was talking about Bernie Sanders, a fellow Democrat and the man now leading the polls to be the party's official nominee. Source link Veterans In Defense Of Liberty - Vidol