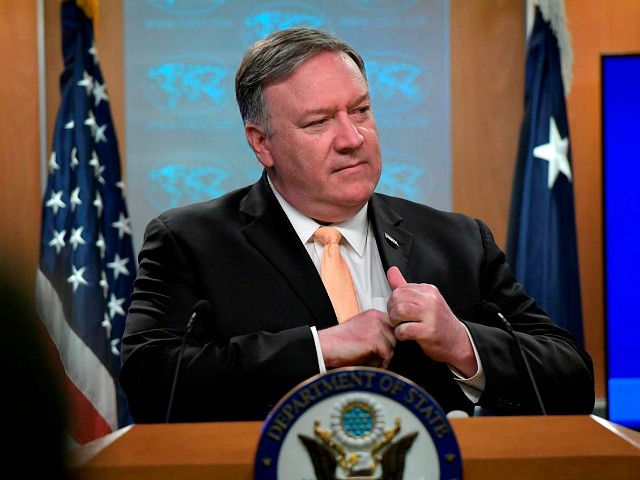 ABOARD A MILITARY AIRCRAFT — Secretary of State Mike Pompeo said Sunday evening that it is “absolutely” the case that the United States has seen “escalatory action” from Iran, prompting the deployment of a carrier strike group and a bomber task force.

“And the fact that if those actions take place if they do by some third party proxy, whether that’s a Shia militia group, the Houthis or Hezbollah, we will hold the Iranians — the Iranian leadership directly accountable for that,” he said.

Asked if he could clarify what the escalatory actions are, he responded, “No I can’t.”

“I don’t want to talk about what underlays it, but make no mistake we have good reason to want to communicate clearly about how the Iranians should understand about how we will respond to actions that they may take,” he added.

The Wall Street Journal reported that the move was in response to “new intelligence that suggests allied interests and American forces could be imperiled,” according to multiple U.S. officials. The outlet reported that the deployment has been “under discussion in recent days.”

The White House announced Sunday evening in a statement that the U.S. was sending the USS Abraham Lincoln Carrier Strike Group and a bomber task force to the “Central Command region” to send a “clear and unmistakable message to the Iranian regime.”

“Any attack on United States interests or on those of our allies will be met with unrelenting force. The United States is not seeking war with the Iranian regime, but we are fully prepared to respond to any attack, whether by proxy, the Islamic Revolutionary Guard Corps, or regular Iranian forces,” National Security Adviser John Bolton said in a statement.

Pompeo said the move was “separate” from an escalating situation between Israel and Palestinians in Gaza.

“The Iranians understand exactly what our view is of the threat that they’re posing to U.S. interests around the world. I can’t say anything more than that,” Pompeo said.

Share This Post
Like it? Vote it up!
00
Previous ArticleDem Rep. Cunningham: I Wasn't Sent to D.C. to Focus on Mueller InvestigationNext ArticleWaiting for Peak Trump
You May Also Like
Bill Weld: Trump Is Like Nero and Caligula
March 13, 2019
#RedforEd-Supporting Marxist Mag: Why Oakland Teachers Strike Ended in Socialist Victory
March 6, 2019
‘Howdy, Modi!’: Behind the Trump-Modi Bromance
September 24, 2019

With the Russia investigation over, and an obsequious attorney general in his corner, the president may be truly unleashed. Source link Veterans In Defense Of Liberty - Vidol

Dem Rep. Cunningham: I Wasn't Sent to D.C. to Focus on Mueller Investigation