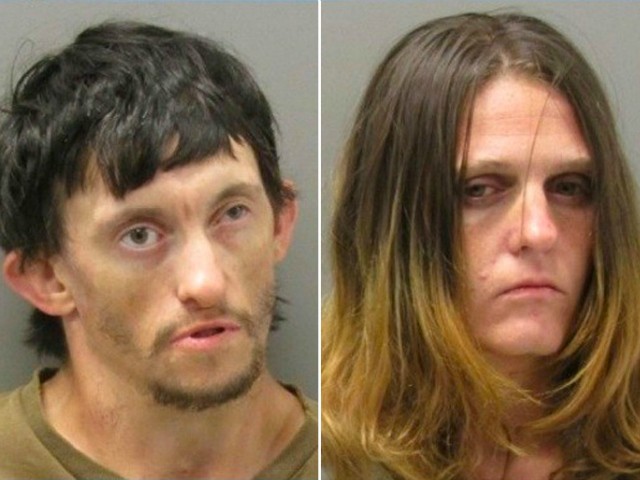 An Arkansas woman who was arrested for allegedly having drug paraphernalia inside her car claimed her brother fed her a “meth sandwich.”

Reports said police in Hot Springs pulled over Elizabeth Marie Catlett, 29, and Don Russell Furr, 33, on Sunday morning when they noticed their car’s headlights were not on.

When the officers approached the vehicle, they could smell marijuana and noticed that Catlett, who was driving, was “moving about the vehicle in a quick, nervous manner,” according to the probable cause affidavit.

Catlett reportedly told the officers no drugs were inside the car. However, the officers checked her for weapons and other illegal items.

“In Catlett’s front pocket, police found a small plastic-wrapped bag that had small scraps of paper, a straw cut into a smaller length, and several plastic bags. She told police that the bag was not hers and that someone else had put it in there,” according to KATV.

Reports said the officers also found what appeared to be methamphetamine residue inside the paper and straws.

However, Catlett told police that if she “pops hot” in a sobriety test, it was because her brother “fed her a sandwich contaminated with meth,” according to the New York Post.

When authorities asked Catlett if her brother gave her meth on a regular basis, she said he did and that she believed he put the drug in her drink during their recent visit at the hospital because she felt “like she does when she used to use meth.”

Reports said officers noticed that Catlett had needle markings on her arm from IV usage. She also failed a sobriety test and refused to submit to a chemical test.

Once Catlett was taken into custody, the officers questioned Furr, who told them that if there was anything illegal in the car, “it would be in the console and it would be ICE.”

Police reportedly found a glass pipe and a package of meth and Q-tips inside a zippered bag in the console.

Furr was also taken into custody and later stated that the last time he used meth with Catlett was on Saturday night before they went to visit her brother at the hospital.

Both suspects are currently being held in the Garland County Detention Center and face charges of possession of methamphetamine or cocaine with purpose to deliver and four counts of possession of drug paraphernalia.

The two are scheduled to appear in the Hot Springs District Court on November 4.

Share This Post
Like it? Vote it up!
00
Previous ArticleWhy I Support House Dems’ Impeachment InquiryNext ArticleErik Prince on Syria: America Needs To Call B.S. On Failed Generals; We Have No More Pattons Or Grants | Video
You May Also Like
Trump Cancels Sale of U.S. F-35 Fighter Jets to Turkey
July 17, 2019
People Died While Trump Played Games With Ukraine
November 15, 2019

Trump Family Throws Stones at Biden From a Glass House
October 18, 2019
Ex-transgenders wish they would have ‘just chilled out’
February 17, 2019

Erik Prince on Syria: America Needs To Call B.S. On Failed Generals; We Have No More Pattons Or Grants | Video

Blackwater Founder Erik Prince told FNC's Tucker Carlson Thursday night that military orthodoxy failed in Afghanistan and Iraq and that no one in Washington is willing to think outside of the box on "hybrid" ways to continue a U.S. military presence in Syria."The president's instincts are right to note have

Trump is on a different planet. He has refused to comply with wholly constitutional legislative requests for documents, information and testimony. He has diverted money toward a project clearly not funded by Congress, and reportedly promised pardons for officials who might break the law.Read Full Article » Source link Veterans In