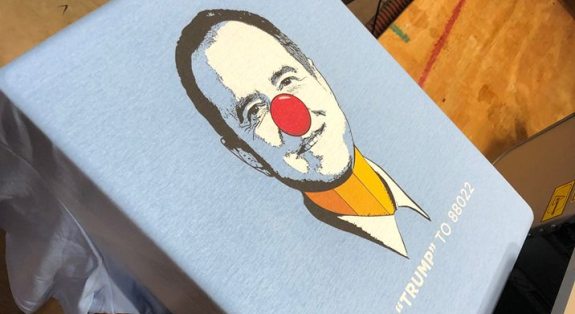 Ah, April Fool’s Day, the one time a year it’s okay to fib a bit and get away with it… just make sure you don’t wait too long to shout, “April Fools!”

If only the media didn’t consider the other 364 calendar days equally fair game to pass on April Fools-like wild lies, fabrications and distortions. And they never apologize either. A little contrition by journalists could buy a smidgen of credibility back after their ruthless witch hunt waged during the deep state-inspired Robert Mueller “Russian collusion” investigation. President Trump’s labelling of the media as “fake news” and “the enemy of the people” was prescient. It’ll be a long time before Americans see the “mainstream” sources as anything but a collection of self-interested liars and cheats.

It’s a shame it had to be this way. Americans need a healthy Fourth Estate to keep them up-to-speed on the workings of those in power, particularly those tasked with law enforcement. President Trump won a major victory last week on the border wall and the press barely mentioned it in passing. They were too busy congratulating themselves for a job well-done on the Russian collusion farce despite its damning (to Trump’s enemies) conclusion.

“Democrats said they will renew the fight in a few months, when the next round of spending bills is due.

“’The president’s lawless emergency declaration clearly violates the Congress‘ exclusive power of the purse, and Congress will work through the appropriations and defense authorization processes to terminate this dangerous action and restore our constitutional system of balance of powers,’ House Speaker Nancy Pelosi, California Democrat, said in a joint statement with Rep. Joaquin Castro of Texas, chairman of the Congressional Hispanic Caucus.”

Perhaps congratulations are in order for Democrats — they’ve finally discovered a policy area they don’t itch to dump gobs of money into. But make no mistake, constitutional parameters and fiscal discipline have nothing to do with their position here. For Pelosi and cohorts, it’s all politics, all the time with no room for common sense or keeping promises and honoring positions made years ago. The Speaker of the House’s vow to renew the funding battle again later this year constitutes fighting words.

But not to Republican congressional leaders. Pelosi and the senate’s creepy “Chucky” Schumer feel empowered to utter all the outlandish statements they want and they won’t suffer for it in the media — or at the ballot box — with their rabid leftist base. In this instance Trump got his money for the wall (subject to the will of the federal courts, of course), but next time around Democrats would close down the government for good before ceding an inch or appropriating a dime for the illegal alien stifling impediment.

The wall declaration’s Republican opponents are correct on one thing: a precedent has been set. Congress will be even more dysfunctional on budgetary matters from here on out because the GOP’s ruling class leaders, past and present — John Boehner, Paul Ryan and now Kevin McCarthy — didn’t take the opportunity to lay down the law when they had the chance. What a collection of gutless cowards they are/were, surrendering on spending fights before the going even got tough. No wonder our government’s over $22.17 trillion in debt and the number’s rising by the second.

Democrats didn’t object in the slightest when Obama bypassed Congress to de facto legalize millions of illegal immigrants in the summer of 2013. If they’d had any backbone — or principles — at the time, Speaker Boehner and the Republican House majority could’ve defunded Obama’s programs servicing the illegal population… but they didn’t. Just as Republicans repeatedly failed to pull the federal leviathan-sustaining money from Obamacare over the years, establishment poohbahs rubber-stamped practically everything Democrats ever asked for.

All Democrats need to do is threaten to withhold votes for a budget and they’ll get what they demand, knowing Republicans wouldn’t dare risk another government shutdown. Well, this year’s stoppage lasted for a record five weeks and no one even remembers it now. The (partial) shutdown was over immigration/national security funding, remember?

Anyone recall President Trump’s amazingly well reasoned and delivered State of the Union address two months ago where something like 75 percent of the viewers thought it was a success? Trump showed that believing in something is a popular proposition, even if a portion of the public remains skeptical of his leadership skills.

Democrats’ threats on the wall are about as empty as Robert Mueller’s Russian collusion clue book, yet Republican leaders won’t summons the gumption to stand up to them — not even on the veto override. In a capital city where “show votes” are the norm, this one was doomed from the get-go. Everyone knew Democrats wouldn’t achieve a two-thirds tally to defy Trump on the emergency declaration yet the GOP leadership remained silent on the 14 wayward Republican waifs who joined the disgraced Democrats.

A political party without discipline ain’t much of a force, is it? We saw it recently in Britain with the Brexit vote — the ruling elites just don’t get it. No matter how hard they try they can’t make the people swallow political impotence. Democrat leaders don’t exhibit any similar fear — but then again, it’s easy to beat one’s chest when out of power. Pelosi’s still getting used to the Speaker’s chair a second time around, but it’s admirable how she always fights to win.

In contrast, every time Republicans encounter a challenge, they speak boldly but then shout “April Fools!” before retiring to smoke-filled backrooms to capitulate. Everyone except President Trump, that is, a man with enough aggression to last two terms. If only GOP heads followed Trump’s lead the party could make headway on a number of priorities. They also might learn a thing or two about how to win political public relations battles.

Democrats lie about practically everything (see Mueller, Robert) but at least they stick together. Ben Franklin quipped “We must, indeed, all hang together or, most assuredly, we shall all hang separately” during the lead-up to voting on the Declaration of Independence, but there’s precious little revolutionary spirit among today’s swampy establishment Republicans.

Unfortunately, Trump must go it alone. It’s worked (thus far) on the border wall matter but he can’t accomplish much without a better team effort.

Democrats never give ground. They even called themselves winners after the Senate voted down the whimsical “Green New Deal” last week, claiming it was a “sham” propagated by Republicans. Again, Stephen Dinan reported at The Washington Times, “Not a single senator backed the freshman congresswoman’s legislation, which was defeated in a 57-0 filibuster. Forty-three Democrats refused to take a stand and voted ‘present.’

“Republicans said the vote was a catastrophic blow to one of the hottest liberal policy ideas to hit Washington in years. The bill called for an upheaval in American energy, an overhaul of the construction sector and history’s largest expansion of the social safety net…

“Top Democrats still insisted they had won. Minority Leader Charles E. Schumer, New York Democrat, said they used the vote to force Republicans to answer questions about whether they believe in global warming and whether they believe humans are responsible. ‘We Democrats are on offense,’ he said. ‘We’re feeling really good about where we’re moving.’”

Creepy “Chucky” voiced similar confidence when his party honks blocked a GOP effort to protect infants born alive during botched abortions a month ago. To Schumer, everything’s a win, even when babies die. Talk about a “sham.” Whenever “Chucky” opens his mouth it’s a victory for Republicans.

Unfortunately, much of what is moving in Congress — or not moving — isn’t an April Fools prank. Insatiable Democrats and feckless Republican leaders are dead serious about their daily missions, which most of the time isn’t good news for us. It’s time Americans woke up.

Share This Post
Like it? Vote it up!
00
Previous Article'The Highwaymen' Review: Kevin and Woody Hunt Bonnie and ClydeNext ArticleMr. President Close The Border
You May Also Like
Your daily dose of spiritual inspiration
April 8, 2019
The Bidens: Stone Cold Crooked, Part 3
October 28, 2019
Trump Stirs the New York Pot for a Reason
July 7, 2019

'The Highwaymen' Review: Kevin and Woody Hunt Bonnie and Clyde

In its own way The Highwaymen is as iconoclastic as Bonnie and Clyde -- it's also kind of forgettable … and nowhere near as good. Source link