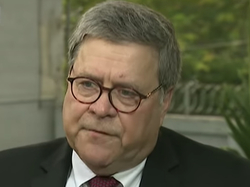 In an interview with CBS News legal correspondent Jan Crawford, Attorney General Bill Barr explained why he wants to investigate how the FBI and DOJ handled the counterintelligence investigation into the 2016 Trump campaign’s suspected ties to Russia and wondered how it would have played in the media if “the shoe was on the other foot.”

He asked: “If those kinds of discussions were held, you know, when Obama first ran for office, people talking about Obama in those tones and suggesting that ‘Oh he might be a Manchurian candidate for Islam’ or something like that. You know, some wild accusations like that, and you had that kind of discussion back and forth, you don’t think we would be hearing a lot more about it?”

JAN CRAWFORD, CBS NEWS: You have concerns about how they conducted the investigation?

ATTORNEY GENERAL WILLIAM BARR: Yes, but you know when you’re dealing with official government contact, the intent is frequently a murky issue. I’m not suggesting that people did what they did necessarily because of conscious, nefarious motives. Sometimes people can convince themselves that what they’re doing is in the higher interest, the better good. They don’t realize that what they’re doing is really antithetical to the democratic system that we have. They start viewing themselves as the guardians of the people that are more informed and sensitive than everybody else. They can, in their own mind, they can have those kinds of motives. And sometimes they can look at evidence and facts through a biased prism that they themselves don’t realize.

That something objectively as applied as a neutral principle across the board really you know, shouldn’t be the standard used in the case but because they have a particular bias they don’t see that. So that’s why procedures and standards are important and review afterward is an important way of making sure that government power is being conscientiously and properly applied. It doesn’t necessarily mean that there are people- you know, that people have crossed lines have done so with corrupt intent or anything like that.

JAN CRAWFORD: But it seems like you have a concern that there may have been a bias by top officials in the FBI as they looked at whether to launch and conduct this investigation?

WILLIAM BARR: Well it’s hard to read some of the texts with and not feel that there was gross bias at work and they’re appalling. And if the shoe were on the other–

WILLIAM BARR: Those were appalling. And on their face, they were very damning and I think if the shoe was on the other foot we could be hearing a lot about it. If those kinds of discussions were held you know when Obama first ran for office, people talking about Obama in those tones and suggesting that “Oh that he might be a Manchurian candidate for Islam or something like that.” You know some wild accusations like that and you had that kind of discussion back and forth, you don’t think we would be hearing a lot more about it?

JAN CRAWFORD: I guess when you said that there were things done that were not the typical run of business, ad hoc, small group, it’s not how these counterintelligence operations normally work. I think that maybe Comey and others might say well this was such an extraordinary thing we had to keep it so closely held. So we had to do it differently what’s your response to that? Is that legit?

WILLIAM BARR: Well it might be legit under certain circumstances but a lot of that has to do with how good the evidence was at that point. And you know Mueller has spent two and a half years and the fact is there is no evidence of a conspiracy. So it was bogus, this whole idea that the Trump was in cahoots with the Russians is bogus.

JAN CRAWFORD: So did you ask the president for authority to declassify?

JAN CRAWFORD: You asked the president?

WILLIAM BARR: Yes and also you know, the direction of the intelligence agencies to support our efforts.

JAN CRAWFORD: So did you discuss this with the DNI and head of the CIA?

JAN CRAWFORD: And what’s their response?

WILLIAM BARR: That they’re going to be supportive.

JAN CRAWFORD: And so you won’t will you declassify things without reviewing it with them it seems like you have the authority to do that?

JAN CRAWFORD: I know you’ve seen some of the criticism and the push back on- on this. Do you have any concerns that doing this investigation, talking about de-classifying certain materials- that that’s undermining your credibility or the credibility of the department?

WILLIAM BARR: No I- I don’t. I think it’s- actually the reaction is somewhat strange. I mean normally–

WILLIAM BARR: Well the media reaction is strange. Normally the media would be interested in letting the sunshine in and finding out what the truth is. And usually the media doesn’t care that much about protecting intelligence sources and methods. But I do and I will.

JAN CRAWFORD: You are only the second Attorney General in history who’s served twice. I think the first one was back in 1850.

WILLIAM BARR: No, I am not on Twitter and every once in a while a tweet is brought to my attention but my experience with the president is, we have- we have a good working, professional working relationship. We, you know, we talk to each other and if he has something to say to me I figure he’ll tell me directly. I don’t look to tweets for, you know, I don’t look at them as directives or as official communications with the department.

JAN CRAWFORD: But when you came into this job, you were kind of, it’s like the US Attorney in Connecticut, I mean, you had a good reputation on the right and on the left. You were a man with a good reputation. You are not someone who is, you know, accused of protecting the president, enabling the president, lying to Congress. Did you expect that coming in? And what is your response to it? How do you? What’s your response to that?

WILLIAM BARR: Well in a way I did expect it.

JAN CRAWFORD: You did?

WILLIAM BARR: Yeah, because I realize we live in a crazy hyper-partisan period of time and I knew that it would only be a matter of time if I was behaving responsibly and calling them as I see them, that I would be attacked because nowadays people don’t care about the merits and the substance. They only care about who it helps, who benefits, whether my side benefits or the other side benefits, everything is gauged by politics. And as I say, that’s antithetical to the way the department runs and any attorney general in this period is going to end up losing a lot of political capital and I realize that and that is one of the reasons that I ultimately was persuaded that I should take it on because I think at my stage in life it really doesn’t make any difference.

A Handy Rundown of Comey's 9 Biggest Legal Problems
May 21, 2019
Booker Defends Omar: Criticism of Her Is ‘Reprehensible,' 'Trafficking in Islamophobia'
April 24, 2019

The Cultural White Walkers Have Descended

American culture is past the point of peaceable navigation of conflict. The Left seeks to destroy all that Christian conservatives hold dear. Source link Veterans In Defense Of Liberty - Vidol