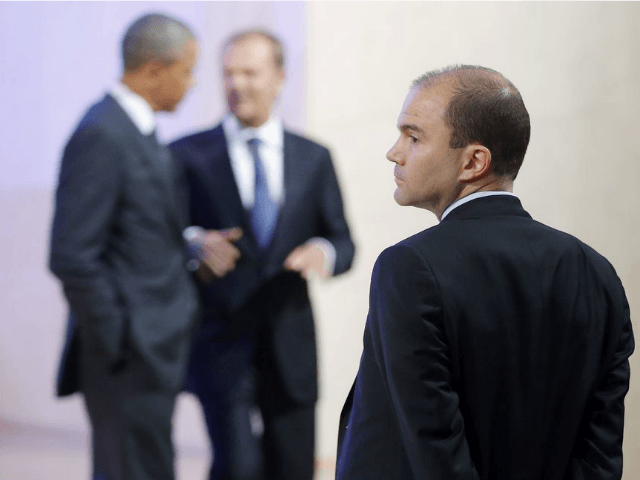 Ben Rhodes, a former national security aide to President Barack Obama, told the New York Times this week that the “donor class” had prevented Obama from taking more anti-Israel steps than the administration had wanted to take.

Rhodes spoke to author Nathan Thrall for a feature article titled, “How the Battle Over Israel and Anti-Semitism Is Fracturing American Politics.” The headline describes “politics,” but Thrall focused on policy debates within the Democratic Party, which has seen the rise of an assertive anti-Israel constituency in recent years. That constituency has included overtly and unabashedly antisemitic critics, largely but not exclusively from the Muslim community.

Thrall writes about the “boycott, divestment, sanctions” (BDS) movement, which seeks to isolate Israel as apartheid South Africa was once isolated — a comparison that BDS critics find not only factually wrong, but also offensive.

Rep. Ilhan Omar (D-MN), whose recent antisemitic remarks sparked turmoil within the House Democratic caucus, supports BDS (though Omar suggested otherwise to voters in her Minnesota’ district during the 2018 election).

One of Omar’s most notorious remarks was, “It’s all about the Benjamins,” followed by a claim that the American Israel Public Affairs Committee (AIPAC) bribes members of Congress to support Israel. (AIPAC does not endorse or donate to candidates.) Thrall notes that Jewish donors do figure disproportionately among the Democratic Party’s largest donors — though he allows that few of them “prioritize pro-Israel policies above all other issues.”

Enter Rhodes — one of the architects of the Iran nuclear deal, which was vehemently opposed by Israel and by pro-Israel Americans. He blamed Jewish donors for the Obama administration’s supposed restraint towards Israel:

According to Ben Rhodes, a former deputy national-security adviser and one of Obama’s closest confidants, several members of the Obama administration wanted to adopt a more assertive policy toward Israel but felt that their hands were tied. “The Washington view of Israel-Palestine is still shaped by the donor class,” Rhodes, who does not support B.D.S., told me, when I met with him at the Obama Foundation in October. “The donor class is profoundly to the right of where the activists are, and frankly, where the majority of the Jewish community is.”

Rhodes’s claims were echoed by “[a]nother former member of the Obama White House,” who told Thrall that the Obama administration had prevailed upon the United Nations Security Council to delay a vote against Israeli settlements in Judea and Samaria (the West Bank) to after the 2016 election. (The resolution also declared Israel’s presence in eastern Jerusalem — including the Jewish Quarter of the Old City, inhabited by Jews for millennia — to be illegal.)

But these claims are contradicted by the fact that after the Obama administration abstained, allowing such an anti-Israel resolution to pass for the first time, Jewish donors (and voters) hardly bolted from the Democratic Party.

Thrall noted: “The fear of losing Jewish donors as the party moves left on Israel may well be overstated.” He also observed that many Jewish donors to the Democratic Party have left-wing views on Israel. Yet the antisemitic canard that Jews use money to control U.S. foreign policy persists within the Democratic Party at the highest levels, and is used by insiders like Rhodes as an excuse — a scapegoat — to deflect criticism of insufficiently radical policy stances.

Notably, Rhodes was appointed by President Obama to the board of the U.S. Holocaust Memorial Council in the closing days of his administration. It was a controversial appointment, given Rhodes’s role as the “Iran deal salesman,” and Iran’s leading role in promoting Holocaust denial worldwide as an official ideology.

Share This Post
Like it? Vote it up!
00
Previous ArticleDonald Trump Changed 'The New York Times.' Is It Forever?Next ArticleIn search of the “Anonymous Source” for CNN
You May Also Like
Dick Morris: ‘If You Feel a Pulse, You Know Hillary’s Going to Run’
October 21, 2019
Kim’s Dilemma: Looking at N. Korea’s Prosperous Neighbors
March 7, 2019
Trump Economy Great for America, Bad for 2020 Dems
July 27, 2019
Six Cartel Gunmen Killed in Mexican Border State Shootout
August 18, 2019

Which Mitch McConnell Will Show Up To Defend The Unborn?
February 7, 2019
Carville: Biden 'Represents Stability' to Dems, Not 'Generational Change'
May 27, 2019

In search of the "Anonymous Source" for CNN

Donald Trump Changed 'The New York Times.' Is It Forever?

President Trump spoke with Esquire about the Times, the Post, NBC, the White House Press Corps, and the difference, in his mind, between Source link