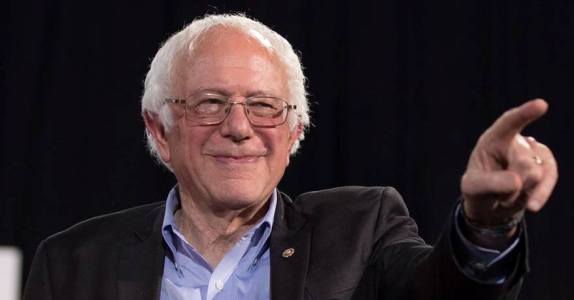 Socialist Bernie Sanders’s presidential campaign brought in $18.2 million in the first quarter of 2019. The Socialist candidate’s first quarter fundraising was fueled by about 900,000 individual donations, averaging about $20, said Faiz Shakir, his campaign manager. The average age of donors was under 39 years old, Shakir said.

According to reporting by Jeffrey Rodack of NewsMax, Sanders already is expanding his campaign operations in key early-voting states, “These resources are going to allow us to compete on all levels in all of the Super Tuesday states,” said Jeff Weaver, a senior adviser to the candidate.

“While we had to in 2016 make choices about where we could compete…this campaign will have the resources and the volunteer grassroots strength to compete in every state in the primary process,” said Weaver.

The Hill reports South Bend, Ind. Mayor Pete Buttigieg said his campaign has brought in over $7 million during the first quarter, while Sen. Kamala Harris, D-CA, has collected $12 million. Sanders, Buttigieg and Harris are the only three to announce their first quarter fundraising figures as of CHQ’s press time.

The Sanders campaign has raised $32 million in total, including the $14 million that the campaign started with reported CBS News’ Emily Tillett. CBS’s Grace Segers reports almost 100,000 registered Independents and 20,000 Republicans have contributed to Bernie Sanders.

According to Ms. Segers’ reporting:

99.99 percent of Sanders’ donors can give again

This solidifies Sanders’ position as a frontrunner in the Democrat’s presidential race according to Tillett.

During his first presidential bid in 2016, Sanders made corporate influence in politics a key issue, touting his refusal to take money from corporate political action committees (PACs) The Hill’s Max Greenwood reminded readers.

Consequently, virtually every Democrat in the 2020 race has similarly sworn off corporate PAC money — and, in some cases, PAC money in general — and has emphasized the role of small-dollar donations in their fundraising efforts reported Greenwood.

The campaign finance filings announced cover the period from Jan. 1 to March 31. Candidates have until April 15 to submit their fundraising reports to the Federal Election Commission.

One reason the first quarter reports are so important is that the Democratic National Committee instituted a fundraising and polling policy that outlines who can qualify for Democratic primary debates. Candidates can qualify by raising money from a minimum of 65,000 individual donors or by receiving at least 1% of support in three primary polls – as of now Sanders and Harris have both qualified.

The first Democrat primary debate will be held from June 26 to 27 in Miami.

Among the major players who have yet to announce their fundraising total for the first quarter failed Texas Senate candidate Robert Francis O’Rourke, New York’s Senator Kristen Gillibrand and Sen. Elizabeth Warren (D-MA) standout.  Greenwood speculates O’Rourke’s number will rival Sanders’s, given that in the first 24 hours of his presidential campaign, O’Rourke said he had raised some $6.1 million.

Evan Halper and Janet Hook report that Sen. Warren’s halting start is particularly unexpected. She has been mired in the single digits in most polls — even coming in behind Buttigieg in the Emerson survey. She never released a first-day fundraising total after she launched her exploratory committee Dec. 31, but, based on filings by the fundraising site Act Blue, it has been estimated at as little as $300,000.

That’s a small fraction of what flowed in for Sanders or former Texas Rep. Beto O’Rourke after their entries into the race say Halper and Hook.

Halper and Hook report eighty percent of Bernie Sanders’ donors had given to a previous Sanders campaign, reflecting his durability as a candidate. And, at this time when small donors are fueling the biggest campaigns, Sanders’ fundraising reflects not just financial strength, but a grassroots momentum that other candidates envy. One hundred donors kicking in 20 bucks provides considerably more value to a campaign than one person who writes a check for $2,000 observed Halper and Hook.

The small donors can give again and again without hitting the federal limit. They are also likely to invest in the campaign in other ways, such as knocking on doors or phone banking. They elevate the profile of the candidate as a reformer who walks the walk of disavowing big money, unlike rivals who must still rely in part on big checks and well-connected fundraisers.

Sanders’ aides were not subtle in making that point:

“No bundling, no sneaking off to posh fundraisers with fancy hors d’eouvres,” said campaign manager Faiz Shakir. “That’s not this campaign. It may be others.”

Share This Post
Like it? Vote it up!
00
Previous ArticlePlan To See Unplanned | ConservativeHQ.comNext ArticleCalifornia Snowpack at 162% of Average, 4th-Highest Ever
You May Also Like
Critics: Senate Ready to Fight Draft Rule Targeting Federalist Society
January 24, 2020
The American-Iranian Psychosis, Next Chapter
January 9, 2020
‘Black People Are Not Owned by the Left’
April 9, 2019
Major city offers bounty on Christian leaders
April 7, 2019
Democrat Congresswoman Will Not Return Campaign Contributions from Epstein
July 9, 2019
Arkansas Woman Claims Brother Fed Her ‘Meth Sandwich’
October 12, 2019

California Snowpack at 162% of Average, 4th-Highest Ever

California's snowpack is officially 162% higher than average, the fourth-highest ever recorded, after state officials performed the annual measurement this week in the Sierra Nevada mountains. Source link

If you have not already seen the recently released movie “Unplanned,” We encourage you to find it at a theater near you.  https://www.unplannedfilm.com  Unplanned is the dramatic true story of a former Planned Parenthood leader's eye-opening journey across the “Life Line.” Abby Johnson quit her job in October 2009. That simple