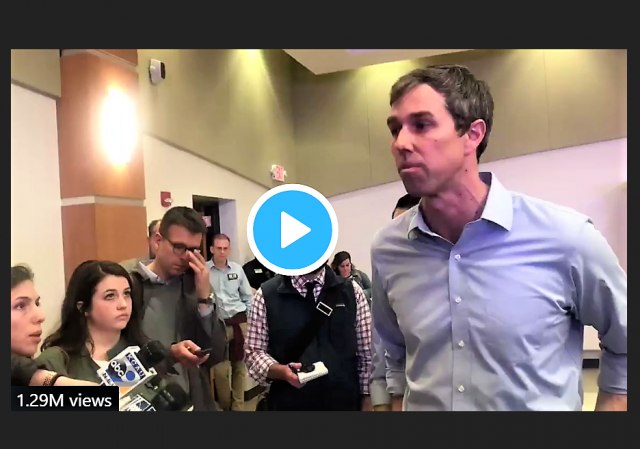 Apparently this is the week 2020 presidential candidate Robert “Beto” O’Rourke has chosen to veer off even further to the left.

“Now, I might expect someone to describe another human being as an infestation in the Third Reich. I would not expect it in the United States of America,” O’Rourke said Thursday, drawing heavy applause from the young crowd at Morningside College.

Asked after the Sioux City town hall if he stood by the remarks, O’Rourke doubled down:

Asked about the charged comparison by a reporter after the town hall, O’Rourke stood by it and cited Trump’s calls to ban Muslims and his remark at the dawn of his presidential campaign that Mexico was sending rapists to the U.S.

“Calling human beings an infestation is something that we might’ve expected to hear in Nazi Germany,” the former Texas congressman said. “Describing immigrants, who have a track record of committing violent crimes at a lower rate than native-born Americans as rapists and criminals. Seeking to ban all Muslims — all people of one religion, what other country on the face of the planet does that kind of thing?”

“Putting kids in cages. Saying that neo-Nazis and Klansmen and white supremacists are very fine people,” he added, evoking Trump’s remarks in 2017 that there were “very fine people” in the pro- and anti-white nationalism marches in Charlottesville, Virginia.

Watch the video of what he said below:

In Iowa, @BetoORourke says the president’s rhetoric on migrants and calls to ban Muslims sound more like the Third Reich than the USA.

Asked about the comparison after the rally, he emphatically stood by it.

Outside of the “kids in cages” comment (which is also not in context), nothing he said in that statement is accurate. To compound it, the reporter who wrote this piece, Sahil Kapur, added insult to injury by incorrectly misrepresenting positions President Trump has taken on these issues (like when Kapur wrote about “Trump’s calls to ban Muslims”).

So with the media engaging in many of the same falsehoods about Trump as many of the Democratic candidates (and their allies like the CBC and outgoing Chicago Mayor Rahm Emanuel) are, let’s fact check what Beto asserted at the town hall . . . and Kapur’s reporting, while we’re at it.

First, as I’ve written previously, Trump did not call neo-Nazis, the KKK, and white supremacists “fine people.” In fact, he explicitly condemned them during the presser he gave in which the question came up after the Charlottesville riots:

Here are the unambiguous actual words of President Trump:

After another question at that press conference, Trump became even more explicit:

“I’m not talking about the neo-Nazis and white nationalists because they should be condemned totally.”

Second, President Trump did not “ban all Muslims — all people of one religion.” Saying it often enough, as Democrats and the media frequently do, will never make it true. This is something that even the left-leaning Fact Check organization pointed out:

Trump most recently issued a proclamation restricting certain nationals of Iran, Libya, Somalia, Syria, Yemen and North Korea from obtaining visas to travel to the U.S. Certain Venezuelan government officials and their families were also barred.

The first five countries are majority Muslim nations, but that’s far from banning all Muslims.

In fact, in January 2017, the Pew Research Center estimated that Trump’s original executive order would affect only about 12 percent of Muslims in the world. That was when restrictions were also placed on Iraqi and Sudanese nationals, who have since been excluded.

The article also noted that the Supreme Court later declared in a ruling favoring Trump on the issue that his travel proclamation was “facially neutral toward religion.”

Third, Trump did not describe asylum seekers as rapists, criminals, animals. He was talking about murderous gangs like MS-13. Here’s what he actually said in May 2018 (bolded emphasis added for context):

[Fresno County] Sheriff Margaret Mims: Thank you. There could be an MS-13 member I know about — if they don’t reach a certain threshold, I cannot tell ICE about it.

The President: We have people coming into the country, or trying to come in — and we’re stopping a lot of them — but we’re taking people out of the country. You wouldn’t believe how bad these people are. These aren’t people. These are animals. And we’re taking them out of the country at a level and at a rate that’s never happened before. And because of the weak laws, they come in fast, we get them, we release them, we get them again, we bring them out. It’s crazy.

Trump’s visit to a [New York] county racked by violence attributed to the [MS-13] gang — 17 murders over 18 months, according to local police — aimed to give “power and poignancy” to his message that lawmakers must do more to combat illegal immigration” a White House aide told reporters in a briefing.

As far as Trump’s use of the word “infestation”, the word is usually used—again—in the context of MS-13, not all illegal immigrants:

Democrats are the problem. They don’t care about crime and want illegal immigrants, no matter how bad they may be, to pour into and infest our Country, like MS-13. They can’t win on their terrible policies, so they view them as potential voters!

When we have an “infestation” of MS-13 GANGS in certain parts of our country, who do we send to get them out? ICE! They are tougher and smarter than these rough criminal elelments that bad immigration laws allow into our country. Dems do not appreciate the great job they do! Nov.

On the issue of “putting kids in cages,” it’s a policy that was carried over from the Obama administration, and it’s done for safety reasons.

He said he would seek to “pull this country together around the work that’s ahead.” He vowed to jettison the “pettiness and meanness and personal attacks,” arguing that Democrats may lose if they try to match Trump’s approach because Trump is too “gifted” at that style of campaigning.

I’m not sure what’s more appalling here. That Beto O’Rourke lied in the manner he did, by invoking Nazi Germany, or the fact that the mainstream media by and large will give him a pass on every bit of it.

Ripping Off the Band Aid