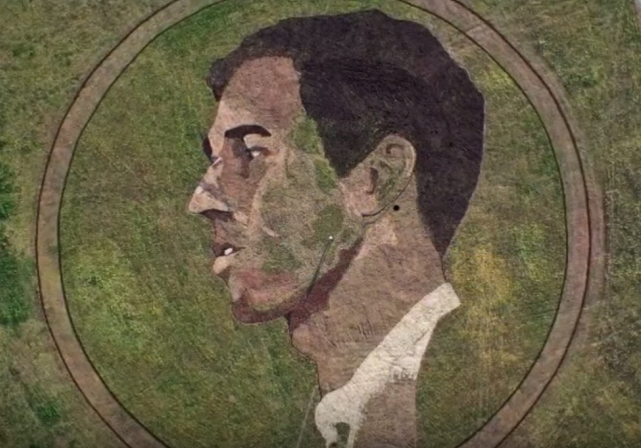 “I love Beto. He has this special something that’s hard to put your finger on, but it’s a populist appeal. It’s eloquent, but it doesn’t seem like he’s talking over your head.”

His latest work of art features a mug of failed Texas Senate Candidate and former Congressman, Beto O’Rourke. Revealed the same day Beto announced his presidential candidacy, the crop circle will remain intact for the remainder of the week.

Herd is a Beto fan (obvs) and told the Houston Chronicle, “I love Beto. He has this special something that’s hard to put your finger on, but it’s a populist appeal. It’s eloquent, but it doesn’t seem like he’s talking over your head.”

The work is on Carson Creek Ranch, crafted by mowing a fallow field of mixed grass and other plants, and adding mulch, rock, clay and pecan shells to create highlights and lowlights for a piece that’s the size of nearly two football fields.

The process took about two weeks; along the way, Herd posted on his Facebook page photos of his progress using a drone, plane, helicopter and a kite strapped with a GPS unit. The piece cost about $10,000 to $12,000 to make, though Herd said many people donated time and money once they learned about the project.

Since revealing the artwork Sunday, he said it’s elicited a huge response from the public through social media, one that he never imagined when he embarked on it.

“There are so many negative political stories out there, and this is kind of a feel-good story,” Herd said. “We’re not trying to say anything bad about anybody else, but we’re talking about who we think this candidate is.”

Herd said he has not yet heard from O’Rourke’s campaign, but he has offered to give the former El Paso congressman a personal tour.

O’Rourke has been referred to as the white Obama for several reasons — cadence, hand gestures, gangliness, having a platform of nothing, running the exact.same.campaign… which seems to attract the same kind of cult following and bizarre edification.

Politics aside, Stan Herd’s art is amazing. His rendition of Van Gough’s Olive Trees is awesome (in the actual sense of the word, not the colloquial watered down version).

Share This Post
Like it? Vote it up!
01
Previous ArticleCNN, Walter Cronkite, and the Coward of BrowardNext ArticleJohn Hickenlooper: 'Diversity' Is America's 'Greatest Strength'
You May Also Like
#RedforEd: Oregon Teacher Walk Out Forcing Portland Public School Shutdown on May 8
April 29, 2019
Report: Egypt pumped deadly gas into tunnel between Gaza and Sinai, killing two
February 14, 2019

7 Questions Ahead of Next Democratic Primary Debate
October 14, 2019
Mitch McConnell Reiterates Edict: 'Case Closed' on Russia, Does Not Defend Burr's Rogue Subpoena
May 10, 2019

CNN, Walter Cronkite, and the Coward of Broward

The jury judging the awards called the CNN town hall in Parkland a 'compelling and powerful forum...on gun control and violence.' Source link