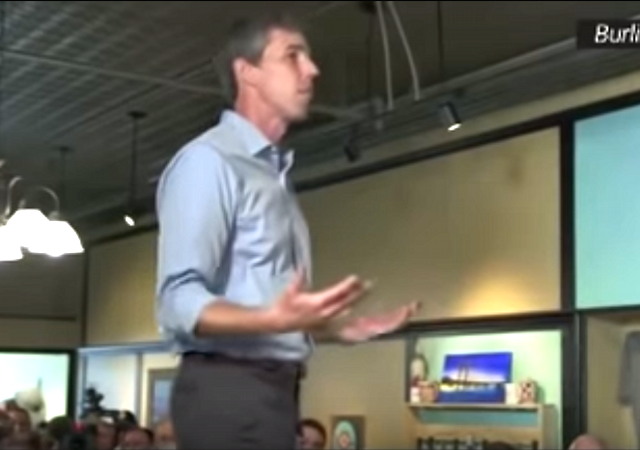 During a campaign stop in Iowa this week, Beto O’Rourke responded positively to a question about packing the United States Supreme Court. It’s a radical idea that has been mentioned in progressive circles for months now.

Had Hillary won the 2016 election and chosen two new justices for the court, the left would be telling us elections have consequences. Now they’re deeply concerned about intellectual diversity.

O’Rourke: Packing the Supreme Court Is ‘An Idea We Should Discuss’

Presidential hopeful Beto O’Rourke discussed his desire to revise the way Supreme Court justices are nominated and confirmed, while speaking at a Thursday rally in Iowa.

O’Rourke mentioned an oft-cited idea that would change the current system where nine justices are nominated by the president and confirmed by the Senate to a new, expanded system with 15 justices. Democrats would choose five, Republicans would choose five, and together those 10 justices would pick another five, in a vote independent of the people who picked them.

“I think that’s an idea we should explore,” he said.

“We’re a country of 320 million people. There’s got to be the talent and the wisdom and the perspective,” he said. “And that court should be able to reflect the diversity that we are composed of in this country.”

This is part of a pattern for Democrats who wish to change the rules whenever they feel they can’t win. We saw the same thing with their demands to end the Electoral College.

Beto is not alone in this. Another, lesser-known Democrat floated the same idea on the podcast run by former Obama staffers.

Rachel Frazin reported at The Hill:

O’Rourke is not the first candidate to weigh in on adding more justices to the court. Indiana Mayor Pete Buttigieg said previously on Crooked Media’s Pod Save America that adding justices is one way to prevent the court from becoming a “nakedly political institution.”

“This central objective that is to prevent the Supreme Court from continuing on this trajectory to become basically ruined by being a nakedly political institution,” he said. “This idea of adding justices is one way to do it,” he said.

“It may actually not be the most compelling way to do it,” he continued. “I mean I’m interested in a policy where you would have five appointees of Republicans and five of Democrats on a 15 member court. And where you get the other five from is a consensus of the other 10 which has to be unanimous.”

Isn’t it curious how the Supreme Court is only in danger of becoming a “nakedly political institution” when Republicans get to choose new justices?

Share This Post
Like it? Vote it up!
00
Previous ArticleA Mass Murder of, and for, the InternetNext ArticleHelp Find A Cure
You May Also Like
92K Migrants Apprehended After Illegally Crossing Border in March
April 9, 2019
Israel Thwarts Large-Scale Attack by Iranian ‘Killer Drones’
August 25, 2019
Our Zero-Emission Future | RealClearPolitics
April 21, 2019

Why the Left Moved From Loving Jefferson to Hating Him
October 2, 2019

What Will Make James Comey Look Even Worse Than He Already Does
December 22, 2019

A Mass Murder of, and for, the Internet

The terrorist attack in New Zealand is shocking on every level — and feels like a first for how unmistakably online it was. Source link