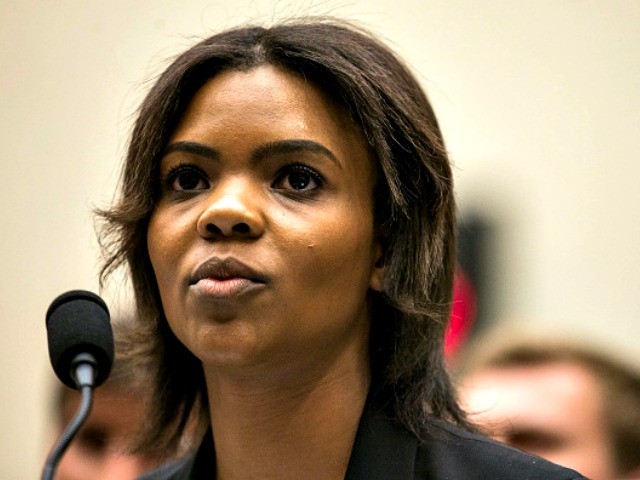 Conservative commentator and Turning Point USA communications director Candace Owens testified at a House congressional hearing on hate crimes and white nationalism on Tuesday, saying, “There is no skin color in patriotism” and that black people are “not owned by the left.”

Rep. Ken Buck (R-CO) questioned Candace Owens on Tuesday afternoon during a House congressional hearing on hate crimes and white nationalism, asking Owens if she had ever encountered hateful speech, bigotry, or racism during her encounters and interactions with conservatives.

“I speak in front of conservatives, probably three times a week,” said Owens, “I jump on a stage and I say everything pro-black, and they [conservatives] are so supportive, and they applaud. All they want is for black Americans to realize that they are Americans first and foremost.”

“I am willing to fall on a sword a thousand times for [black Americans] to wake up and realize that we are being lied to, abused, and used by the Democrat Party,” said Owens.

Rep. Buck responded by asking Owens why, then, did the chairman of the House Committee on the Judiciary, Rep. Jerrold Nadler (D-NY), say in his opening statement that Owens openly associates with “purveyors of hate.”

“Purveyors of hate, by his definition, is anybody that supports the president,” answered Owens, “I support the president because he’s done a tremendous job in helping the black community, despite all of the rhetoric from the media and leftists that do not want him to be successful.”

Owens continued by elaborating on what President Donald Trump has done to help the back community:

He’s lowered the black unemployment rate, it’s the lowest its every been — I believe the last number I checked was 3.5 million people are off of food stamps, something that the Black Caucus — sat down and didn’t applaud, neither did any of the Democrats applaud, because they want a system where blacks are dependent on the government. They are people that put in place the policies that broke down the black family, and the biggest problem that’s facing our community is father absence. In every room that I’ve been with the president, he talks about real issues, and he doesn’t pander to us, he doesn’t do Alexandria Ocasio-Cortez’s southern drawl accent and speaking to us like we’re slaves. He asks us important questions, and the most important question he could’ve asked was, ‘black America, what do you have to lose?’ because we were already losing under Democrat leadership.

On the topic of free speech in institutions of higher learning, Owens said that she believes there should be open discussions on college campuses.

“I do a campus tour, tonight I’m flying up to University of Connecticut to continue that,” said Owens, “and we are being met with aggressive leftist groups. Three Antifa chapters have declared they’re going to try to shut it down, and we face this violence every day on the left, and nobody ever wants to talk about it.”

“We’re not talking enough about political hatred in this country,” continued Owens, “we’re not talking enough about conservative activists being attacked, like myself, and we had a student whose dorm was set on fire for being a member of the Turning Point chapter, and all we preach is for free markets and capitalism as a means to lift the most people out of poverty.”

“And, of course, my main thesis is that black people do not have to be Democrats, and we are not owned by the left,” stated Owens.

During his April 9, 2019, town hall in Florida, 2020 presidential hopeful Eric Swalwell (D-CA) said that he thinks licensing and insurance requirements for gun owners are worthy pursuits. Swalwell said, “I think most gun owners who are responsible want to see more licensing, and standards, and background checks. So I do support

As part of a federal court settlement agreement. Airbnb appears to be settling all the litigations against it over the discriminatory policy. We previously covered the policy implemented by Airbnb last November to ban listings from Jewish settlements in Judea and Samaria (the “West Bank”). That amounted to a de facto Jewish