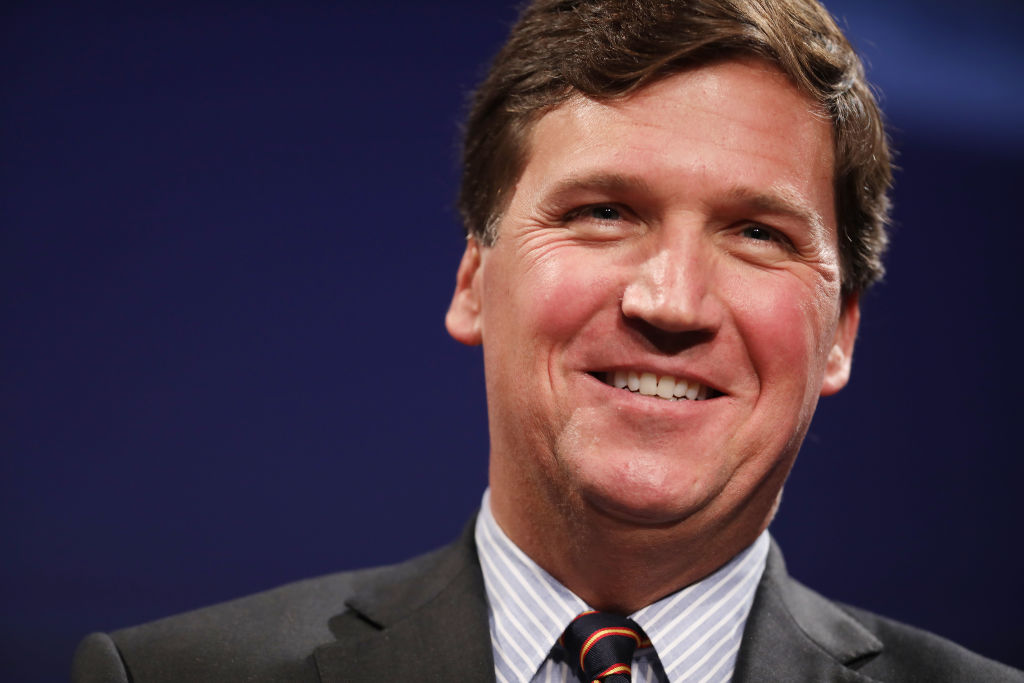 Tucker Carlson held nothing back on Tuesday night, branding MSNBC host Joy Reid a “moron” before broadening his attack against the “compliant, brain-dead, dumb leaders” of America’s elite institutions during an interview on Fox News’ “The Ingraham Angle.”

Host Laura Ingraham noted that the left-wing commentators who accuse Republicans of being Russian dupes are “the same individuals who in the 1980s, when I was in college, were making excuses for the Soviet Union” and demonstrating against the Reagan administration’s successful foreign policy, which led to the downfall of the USSR. “All of those people are now are like, ‘Well, this much weaker Russia is our biggest problem facing the United States.’ And meanwhile, you have people on television like Joy Reid who thinks that anyone who isn’t beating the war drums is basically a Kremlin apologist.”

Ingraham then aired a clip of Reid asserting that “Trump’s ties to Russia, the help his campaign accepted from them … are all too real,” despite the fact that special counsel Robert Mueller’s report found no instances of collusion between the Trump campaign and Russia. Reid proceeded to claim “the Republican Party, once a stalwart opponent of Soviet aggression during the Cold War, are [sic] now essentially Kremlin apologists.”

Carlson responded that no one who made such broad-brush attacks was presenting a serious argument. “I have to say, you have to pull back a little bit: That woman, who is a moron, went to Harvard. I went to Trinity College in Hartford, Connecticut — so, who’s got the privilege, exactly?” asked Carlson. “This is someone who’s not capable of thinking clearly, or expressing herself clearly, or writing a coherent sentence, and she got into Harvard!”

Reid’s elevation from Harvard to multiple, eponymous, nationally televised cable news programs proves “that our system” is “elevating, and producing the most mediocre people imaginable,” Carlson continued. “That’s the core problem, and they run every American institution – these people who’ve been brought up through a system that is designed to create compliant, brain-dead, dumb leaders. And it’s doing that very effectively, obviously,” apparently referring back to Reid’s cable news career.

.@ShevrinJones: "It is becoming dangerous every single day to live in the 'free state of #Florida.'" #TheReidOut #reiders pic.twitter.com/4bWzlnCwWl

The highly rated Fox News duo then pivoted from Russia to China. Ingraham, who agreed that Russia is “an adversary” to U.S. foreign policy goals, asked Carlson why “these same individuals who are pushing the war narrative in Ukraine for U.S. forces, [are] the same ones who seem to soft pedal criticism, often times, of China.”

“They’re not getting rich from Russia,” replied Carlson.

The Daily Wire’s new documentary series “China: The Enemy Within” by filmmaker Lee Smith, exposes how U.S. leaders have sold out the American middle class, imperiled U.S. national security, and throttled criticism of China’s abysmal human rights record for personal enrichment. Beginning no later than the late 1990s, China offered powerful American politicians, business interests, and the entertainment industry “a place for the American establishment to build wealth and power without anyone looking over their shoulder.” As a result, Beijing created “an enormous network of American elites who draw their wealth, power, and prestige from their relationship with the Chinese Communist Party,” Smith told me in an exclusive interview.

Ingraham went on to note that Russia’s economy is roughly the size of Italy’s, undermining a major goal of Kremlin apologists. One of the foremost goals of Russian propaganda is to make Moscow appear more powerful than it is, Péter Krekó, a former fellow at the National Endowment for Democracy and executive director of the Budapest-based Political Capital Institute, told the 2017 European Liberty Conference. The legacy media have accomplished this task beyond Moscow’s wildest dreams. Russia — which lost 1 million people in 2021, the largest peacetime population decline in Russian history — has a contracting population, an aging nuclear arsenal, and an economy smaller than the GDP of Texas. “Russia may struggle to project and maintain influence globally,” according to an April 2021 report from the U.S. National Intelligence Council.

China — which has made increasingly menacing moves toward Taiwan, which the U.S. is legally obligated to defend — has the world’s second-largest economy: $14.7 trillion in 2020, according to the World Bank. The Heritage Foundation’s 2022 Index of U.S. Military Strength concluded that the U.S. military would “certainly would be ill-equipped to handle two nearly simultaneous” major regional conflicts at the same time.

You can watch the segment below: