Colbert Celebrates FBI Raid On Mar-A-Lago: ‘It’s Christmas … We All Got The Present We Wanted’ 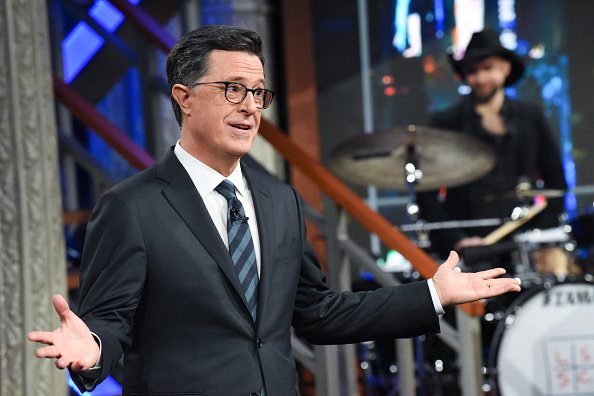 Late-night host Stephen Colbert, who has spent the latter days of his career mocking former President Trump, celebrated the FBI raid on Trump’s Mar-a-Lago home, saying, “We all got the present we wanted.”

Colbert started by noting the weather in Los Angeles, saying, “It may be hot outside, but in here it’s Christmas.”

“Because yesterday, we all got the present we wanted: FBI agents raided Mar-a-Lago,” he cheered, to audience applause. “Oh, mwah! That is the most beautiful sentence America has ever produced. It’s right up there with ‘We put cheese inside the crust.’”

“So we know the raid happened,” he continued. “We still don’t know why the raid happened because we don’t yet know what was in the warrant. Think about that: We’re talking about the former President of the United States of America. The FBI raids his home and all I can think is, which of his crimes they’re investigating, cause he’s done so many. It’s hard.”

Colbert then indulged himself in an attempt at comedy: “At this point he can’t keep track. ‘Sir, do you know why I pulled you over?’ ‘Let’s see, the body’s in my trunk? The meth in the glove compartment? The back seat full of illegal spider monkeys who definitely got into the meth? Oh, it’s the busted tail light? I was kidding about the other stuff.’”

For Colbert to be lewd, crude and unfunny is nothing new: in 2017, he infamously said of President Trump, “Sir, you attract more skinheads than free Rogaine. You have more people marching against you than cancer. You talk like a sign language gorilla who got hit in the head. In fact, the only thing your mouth is good for is being Vladimir Putin’s c*** holster.”

Colbert doesn’t like Republican presidents, period. At the 2006 White House Correspondents Dinner, at which Colbert delivered an attack so searing on President George W. Bush that even the normal cadre of left-wing institutions like The New York Times and The Washington Post wouldn’t report it. Excerpts included:

We’re not so different, he and I. We get it. We’re not brainiacs on the nerd patrol.

I stand by this man. I stand by this man because he stands for things. Not only for things, he stands on things. Things like aircraft carriers and rubble and recently flooded city squares. And that sends a strong message: that no matter what happens to America, she will always rebound — with the most powerfully staged photo ops in the world.