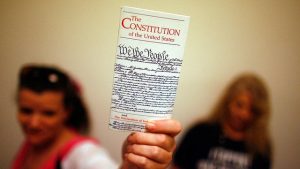 How the Document Was Composed

The Constitution’s Framers were familiar with a long line of Anglo-American documentary landmarks, of which the most famous was the Magna Carta and the most recent were state constitutions and the Articles of Confederation.

But in drafting the U.S. Constitution, the framers composed a document unique for its balance and beauty.

The Constitutional Convention commenced business in late May 1787. Over the next two months, it debated and adopted a series of resolutions. In late July, it created a special committee to hammer the resolutions into a first draft. The committee consisted of four leading lawyers and a former president of the Confederation Congress (Nathaniel Gorham of Massachusetts). Its chairman was John Rutledge of South Carolina, an outstanding judge later to serve briefly as chief justice of the U.S. Supreme Court. This group was called the Committee of Detail. The other delegates adjourned while the Committee of Detail worked.

On Aug. 6, the delegates reconvened and examined the committee’s draft. It began with a “We the People” preamble and consisted of 23 articles. It was a very competent job, but its style was unremarkable.

The convention then debated the committee draft clause by clause—approving some provisions, rejecting some, amending others. On Sept. 10, the convention directed a new committee to produce a final version. This was the Committee of Stile [sic] and Arrangement.

The Committee of Stile

As was true of the Committee of Detail, four of the five members of the Committee of Stile were lawyers. They were William Samuel Johnson of Connecticut (chairman); Alexander Hamilton of New York; Gouverneur Morris, resident of New York but representing Pennsylvania; and Rufus King of Massachusetts. The non-lawyer was James Madison of Virginia.

As proficient as the Committee of Detail had been, those on the Committee of Stile were of an even higher order. Johnson had a degree from Yale and honorary degrees from both Harvard and Oxford. He had served in the Stamp Act and Confederation Congresses. He later became a U.S. senator and the first president of Columbia College (now Columbia University).

Hamilton was an acknowledged genius, an impoverished child without a family who had become a military figure and then a leader of the New York bar. Morris, a future U.S. senator and diplomat with a fondness for classical Latin literature, had served the Confederation as a member of Congress and as assistant superintendent of finance. As a member of Congress, King had been largely responsible for the decision to ban slavery in the Northwest Territories. Like Morris, King later served as a U.S. senator and diplomat. Madison was very widely read in a host of subjects, including law and political science (he particularly admired Aristotle’s “Politics”), and he had been instrumental in bringing the convention together and facilitating its deliberations.

To focus all this talent on drafting the Constitution’s final version, the convention disregarded the rules of regional balance previously followed in committee staffing.

Morris performed most of the actual writing, but we can be sure that every member of this brilliant group had much to contribute.

The Constitution might have been as boring as most power-granting documents were. The Committee of Stile’s great achievement was to create from prosaic material a product inspirational, beautiful, and grand.

The Division by Articles

Under Morris’s pen, the Constitution was reduced from 23 articles to seven. The new number couldn’t have been accidental: “Seven” resonates in the Western biblical and literary tradition.

So also does the number “three.” There had been a practice of treating each house of the legislature as a separate branch of government, and the Committee of Detail had devoted separate articles to the House of Representatives and to the Senate, as well as to the executive and the courts.  But the Committee of Stile combined the House and Senate into a single Article, thereby reducing the number of branches to the special number of three.

Hence, the Constitution has a three–four division: three articles on the three branches of government, followed by four articles on other subjects. This mirrored the structure of traditional liberal arts education: First the trivium of three basic subjects, then the quadrivium of four advanced subjects. (If this connection seems to be tenuous, consider again the backgrounds of the drafters.)

Organization of Articles I, II, and III

In an earlier essay, I pointed out that the Constitution is fundamentally a document granting enumerated (listed) powers. In other words, it has common characteristics with powers of attorney and similar agency agreements, trust instruments, and corporate charters and bylaws.

(1) Preamble (if any), with designation of the grantor and grantee;

(4) Limitations and (perhaps) other details.

This pattern didn’t necessarily follow the lines of the numbered sections, and that’s true of the Constitution as well.

Many commentators, and indeed the Supreme Court, have treated the latter two as “vesting clauses” conveying power rather than as preambles. But that’s not correct. It’s an error arising from ignorance of 18th-century drafting practice.

After its preamble, each Article explains how the relevant branch of government is organized,  enumerates the powers granted to that branch, and adds limitations and restrictions.

Consider Article II (the president) as an example. The first sentence is the preamble. The rest of Section 1 outlines the president’s term of office, mode of election, qualifications, and similar information. Sections 2 and 3 enumerate most of his powers. Section 4 authorizes impeachment, thereby limiting the office.

To be sure, the Constitution also includes inter-branch relationships that weaken the organizational pattern. For example, the president’s enumerated power to veto bills appears in Article I, rather than in Article II. The Senate’s authority to approve or reject presidential nominees and treaties appears in Article II instead of Article I—although that was because in the 18th century, appointing officers and approving treaties were considered to be part of the executive authority.

After the trivium of Articles I, II, and III, follows the quadrivium. Article IV collects rules designed to make the union more “perfect” (complete). Among these are regulations governing relationships among the states, provisions for the admission of new states, and provisions for federal territories and property.

Article V enumerates the powers granted to various assemblies—legislatures and conventions—acting in the amendment process. The subtleties in this Article are such that they merit their own essay. They include a carefully constructed set of parallel and alternative routes to amendment. Of the two proposal procedures and the two ratification procedures, one in each pair focuses on the states without neglecting the nation, while the other focuses on the nation without neglecting the states.

Article VI encompasses three sections: Section 1 mandates the federal government to pay debts incurred under the Confederation and therefore grants authority to do so. Section 2 states that the Constitution is the supreme law of the land. This, like some other provisions in the Constitution, is an example of what lawyers call a “rule of construction.” It sets forth explicitly what a careful and objective interpreter would draw from the text anyway.

Article VI’s Section 3 requires oaths of all federal and state officials. Under Founding Era law, this effectively limited office holding to theists, because only a person who believed in God could take a legal oath. Otherwise, Section 3 barred religious tests.

Article VII reflects the fact that the ratifying states were using their reserved powers to replace the Articles of Confederation with a new government. Critics have long claimed that the states were bound by the unanimity demanded by the Articles. As I explained in a previous essay, this claim is wrong: It’s based on misreading the constitutional process and then-established law.

The Bill of Rights

James Madison proposed the constitutional amendments that became the Bill of Rights in the First Federal Congress (1789). His original plan was to interweave the amendments into the Constitution’s text.

However, Congress concluded that this would be clumsy and would upset the original Constitution’s careful organization. So Congress placed the Bill of Rights at the end, and that procedure has been followed for amendments ever since.

Robert G. Natelson, a former constitutional law professor, is senior fellow in constitutional jurisprudence at the Independence Institute in Denver. He is the author of “The Original Constitution: What It Actually Said and Meant” (3rd ed., 2015).

The post Composing the Constitution appeared first on Hunt For Liberty.