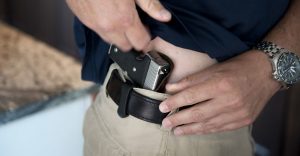 By Charles Heller – May 2022 AZCDL Newsletter

Universities are tasked with giving students their “skill set” to be successful. They teach important career subjects, and how to apply rational judgment and critical thinking skills, such as using comparison and analysis. Lets do this with campus carry:

Has the LAWFUL presence of firearms at schools, served to reduce violence?

Has the LAWFUL carry of firearms on a campus caused any problems?

Since the fall semester of 2006, state law in Utah has allowed licensed individuals to carry concealed handguns on the campuses of all public colleges. Concealed carry has been allowed for several years at both Colorado State University in Fort Collins, CO and Blue Ridge Community College in Weyers Cave, VA. This has yet to result in a single act of violence at any of these schools. Numerous studies*, and various state agencies, show that concealed weapon permit holders are five times less likely than non-license holders to be arrested for violent crimes.

Will the police protect the students?

Testimony before the Arizona Legislature by the police Chief of ASU, said that, “Our response time is usually about 4 minutes to any location on campus.”

The police were not able to protect the victims at Virginia Tech, Columbine, U of A, or NIU. When seconds count, the police are minutes away.

The courts have consistently ruled that the police do not have an obligation to protect individuals. In 1982, in Bowers v. Devito a federal court of appeals said: “There is no constitutional right to be protected by the state against being murdered by criminals and madmen.” (686 F.2d 616, at 618)

Will the police be able to tell the shooter from the defender when they arrive?

Contrary to what the movies might have us believe, most real-world shootouts last less than ten seconds**. It is unlikely that an exchange of gunfire between an armed assailant and an armed citizen would last more than a couple of seconds before one or both parties were disabled. If the assailant were disabled, he would be unable to do any more harm.

When arriving officers order the CCW permit holder to drop the gun, he does. The violent criminal actor often does not. That is a problem that the police are well equipped to solve.

There is simply no real down side to letting 21-year-old CCW permit holders, carry concealed weapons on campus.

**In The Line of Fire: Violence Against Law Enforcement, U.S. Department of Justice, Federal Bureau of Investigation, National Institute of Justice, 1997

The post Conceal Carry on Campus? appeared first on Hunt For Liberty.