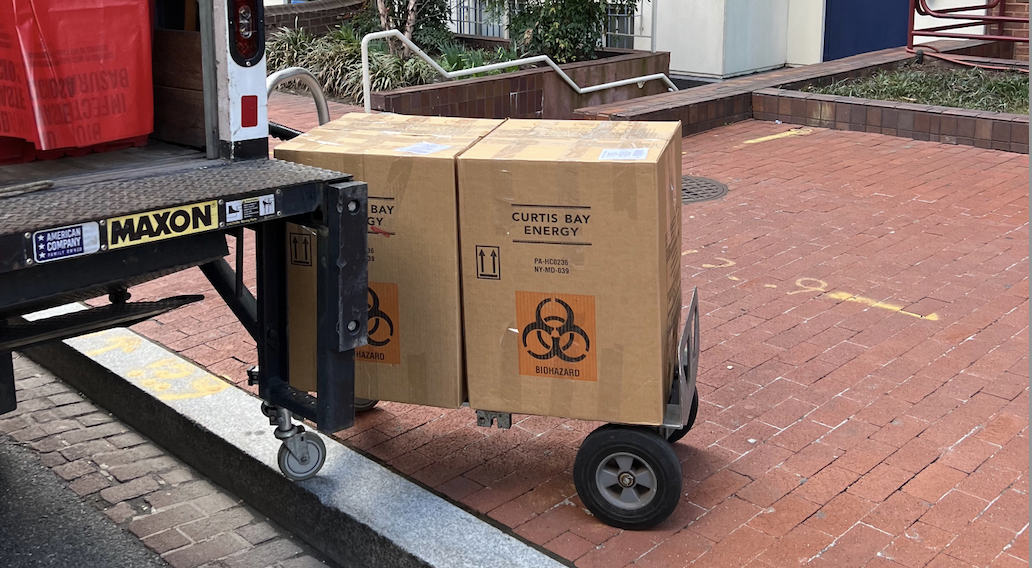 WASHINGTON — A Baltimore waste facility is swearing it doesn’t incinerate fetal remains amid controversy over the discovery of aborted baby bodies that were allegedly contained in a box covered with the waste facility’s logo.

Members of the Progressive Anti-Abortion Uprising (PAAU) told The Daily Wire that they intercepted a box filled with dismembered babies on its way to Curtis Bay Medical Waste Center.

PAAU says the box contained 110 mostly pulverized babies who were aborted in the first trimester as well as several babies killed through late-term abortions.

That box was from Washington Surgi Center, an abortion clinic in downtown D.C., and covered in Curtis Bay labels, the activists say. Photographs provided by PAAU show boxes on a dolly fitting this description.

Washington Surgi Center did not respond to The Daily Wire’s requests for comment.

Photo of the box that the Progressive Anti-Abortion Uprising says contained a vast amount of fetal remains.

Curtis Bay Medical Waste Services denied that any of their boxes were taken and denied that they dispose of fetal remains in a Tuesday morning statement and phone call with The Daily Wire.

The company said that a Curtis Bay employee took custody of three packages from Washington Surgi Clinic on March 25 and delivered all of these packages to Curtis Bay’s incineration facility.

“At no time did the Curtis Bay employee hand over any of these packages to the Progressive Anti-Abortion Uprising or other third party, and any allegations made otherwise are false,” the statement said.

PAAU members Lauren Handy and Terrisa Bukovinac told The Daily Wire in an interview that they obtained a box full of fetal remains at Washington Surgi Center.

Photo of the truck the Progressive Anti-Abortion Uprising says was outside Washington Surgi Center when they intercepted the fetal remains.

“We saw a medical waste truck outside from Curtis Bay Medical Waste Services,” Bukovinac explained. “Washington Surgi Center is inside a medical building, so we weren’t necessarily sure that it was what we thought it was.”

The women saw a driver loading boxes into the back of the truck and noticed a couple of boxes sitting on a dolly. They say they asked if he knew what was in the boxes, and when he said that he did not, Bukovinac said she told him, “It’s dead babies.”

“I asked him if he picks up at other abortion clinics because there were other boxes in the trunk, and he looked at the boxes and looked back at us a little panicked and he said ‘I don’t know,'” Bukovinac said.

“Would you get in trouble if we take one of these?” she said she asked the truck driver, to which she says he responded, “What would you do with them if you took one?”

When Handy told him that they planned to give the babies a “proper burial” and funeral, “he thought about it for just a second and he said, ‘Ok,’ and he gestured at the box,” Bukovinac said. “Lauren grabbed the box, and we took it back to our apartment.”

The Daily Wire repeatedly pressed a Curtis Bay spokesman on this point, but the spokesman insisted that Curtis Bay does not dispose of fetal remains and demanded evidence that the boxes contained the aborted baby bodies photographed by Live Action.

“As stated in client agreements and company policy, customers like Washington Surgi Clinic are prohibited from disposing of fetuses and human remains via Curtis Bay’s services,” the Curtis Bay statement said.

“Curtis Bay provides its clients with medical waste bags and boxes to use in a manner that complies with applicable law, client agreements and company policy,” the company continued. “Curtis Bay continues to fully cooperate with law enforcement.”

Bukovinac told The Daily Wire that police took the box when they collected the remains after PAAU’s lawyer sent a letter to police asking authorities to collect the aborted babies and conduct a forensic examination of them. (Warning: Graphic photo below.)

Photo showing the inside of the box that the Progressive Anti-Abortion Uprising says contained fetal remains.

The Metropolitan Police Department would not confirm that it had the box in its possession.

“Due to the ongoing nature of this investigation, we are unable to discuss specifics such as this,” Public Affairs Specialist Alaina Gertz said. “This case remains under active investigation.”