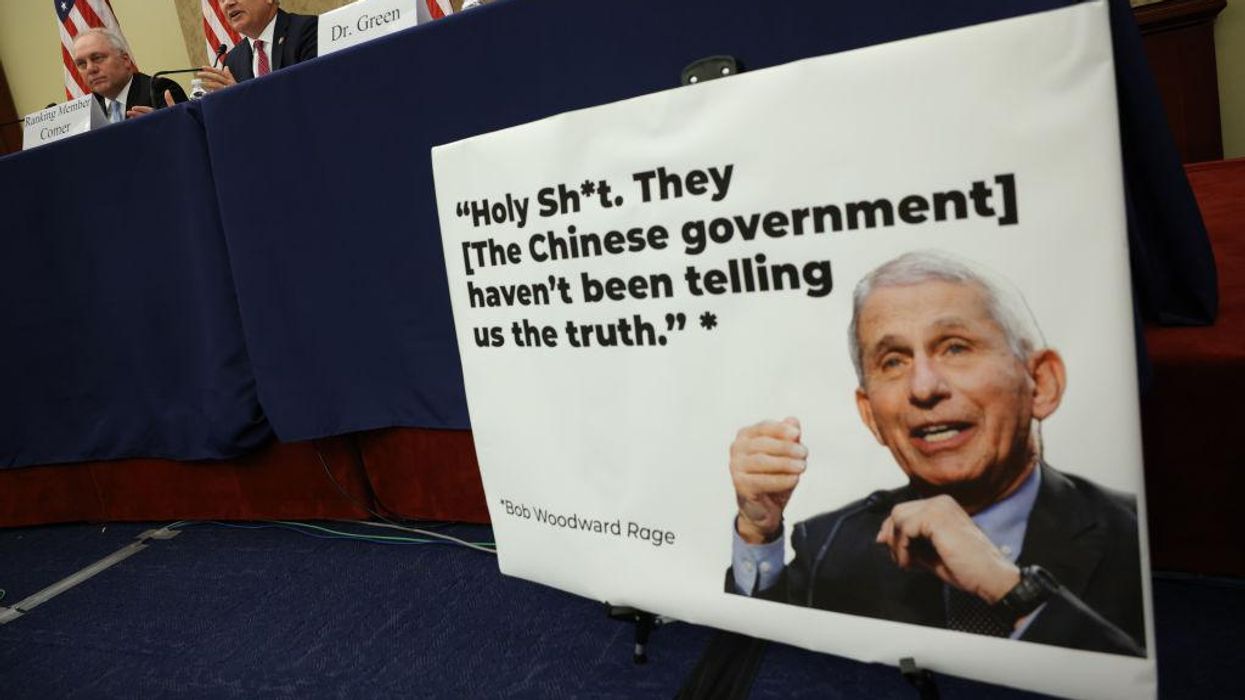 House Republicans held a hearing on Tuesday to investigate the origins of the COVID-19 pandemic but were hampered by Democrats, who refused to participate. Because Republicans are in the minority and cannot schedule official hearings, they proceeded alone and were unable to compel key witnesses to testify, like Dr. Anthony Fauci.

The hearing was organized by House Minority Whip Steve Scalise (R-La.), who serves as the ranking member on the Select Subcommittee on the Coronavirus Crisis. Republicans chose to hold the informal hearing — which took place in the Capitol Visitors Center because they could not reserve an official hearing room — amid growing frustrations with the Democratic majority's neglect to schedule a hearing with expert testimony on the origins of the coronavirus pandemic.

"What was the origin of COVID-19? We have asked that question for more than a year and requested that the House majority hold hearings to investigate the origins of COVID. Perplexingly, Speaker [Nancy] Pelosi [(D-Calif.)] has refused to allow a single hearing — calling it a 'diversion,'" Scalise said in his opening remarks. "As the American people will hear today from our expert witnesses, this is far from a diversion."

"The evidence continues to mount that this was a man-made disaster that started in the Wuhan lab," Scalise continued. "If that is the case, then it might be the crime of the century – exponentially worse than Chernobyl."

There are two mainstream hypotheses on the origins of the COVID-19 pandemic. The first is that a progenitor of the SARS-CoV-2 virus was hosted by some animal, maybe bats, and through natural evolution the virus became transmissible by humans somewhere near Wuhan, China, before spreading worldwide. This became the consensus theory at the onset of the pandemic because top public health officials and the mainstream media worked to suppress the alternative hypothesis — that the virus was engineered in experiments conducted at the Wuhan Institute of Virology with funding from National Institutes of Health grants and was somehow leaked.

While there is no conclusive evidence in support of either hypothesis, the inability of scientists to identify an intermediary animal host for the SARS-CoV-2 virus has led many scientists to call for a re-examination of the lab-leak theory. Discovering how the COVID-19 pandemic began would help governments and the scientific community take preventive measures against and better respond to a future pandemic.

House Republicans have urged Speaker Nancy Pelosi (D-Calif.) to advance legislation that would declassify government intelligence related to the origins of COVID-19 and to hold hearings discussing the National Institutes of Health's funding for research at the Wuhan lab, which was approved by National Institute of Allergy and Infectious Disease Director Dr. Anthony Fauci.

"The very name of our committee is the Select Subcommittee on the Coronavirus, yet Speaker Pelosi refuses to have a hearing on the origin of, you guessed it, the coronavirus," Scalise said. "What are they trying to hide?"

Reached for comment by the New York Post, a spokesman for Pelosi said in a statement, "Perhaps if Republicans were actually interested in real answers, they would remember that the House Intelligence Committee is reviewing the intelligence on this matter in addition to the Biden Administration's own review."

Tuesday's GOP hearing featured testimony from several scientific experts who disputed the natural origins theory and reviewed the evidence that suggests the virus could have leaked from the Wuhan lab.

Dr. Steven Quay, the founder of Atossa Therapeutics and a physician who has researched the origins of COVID-19 using publicly available viral data, testified that there are six "undisputed facts" that support the lab-leak hypothesis.

He noted that evidence shows the outbreak of the virus did not occur in the Huanan Seafood Market, as originally thought, and that after an extensive search, scientists have still not identified a sample of SARS-CoV-2 in animals and failed to find evidence of animal-to-human transmissions. Quay further testified that the virus appears to have features associated with gain-of-function research — experiments that change the genetic makeup of viruses to make them transmissible to humans in order to study how naturally occurring viruses may evolve to become pandemic threats.

Concurring was Dr. Richard Muller, emeritus professor of physics at the University of California, Berkeley, who said "every scientific test that distinguishes between the zoonotic and lab-leak origins gives results that highly favor the lab origin."

"It is possible that the widespread belief in the zoonotic hypothesis derived from an overemphasis on belief in scientific authority, such as references to papers by eminent health professionals, without the concomitant attention to the data and the analysis that were used to justify their conclusions, and possibly from a desire to avoid insulting China," Muller testified.

Ret. Adm. Brett Giroir, who oversaw coronavirus testing efforts under President Donald Trump's administration, added that "although we do not yet have indisputable evidence pinpointing the exact origin of the virus that causes COVID-19, I assess that the most likely origin was an accidental infection of laboratory personnel from the Wuhan Institute of Virology, with secondary transmission to the local population, and subsequent spread to hundreds of millions of people around the world."

Republicans invited Dr. Fauci, NIH Director Francis Collins, and Dr. David Hassell, the chairman of the government oversight board that reviews an approves grant applications for gain-of-function research, to testify as well, but lacking subpoena power, they were unable to compel them to appear at the hearing.