Grand jury in Hunter Biden probe asks who is the 'big guy'? 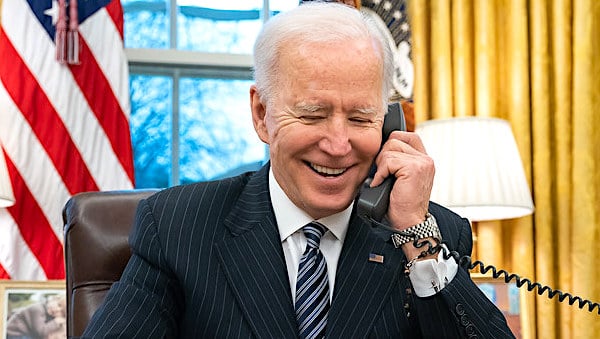 Joe Biden talks on the phone with Katherine Tai in the Oval Office of the White House Thursday, March 18, 2021, to congratulate her on her confirmation as U.S. trade representative. (Official White House photo by Adam Schultz)

If the "big guy" in a joint venture Hunter Biden and his business partners forged with a Chinese state-controlled energy firm is Joe Biden, the Justice Department investigation of the president's son and his foreign deals clearly takes on a new dimension.

The White House has adamantly insisted the president had no involvement in the global enterprise Hunter Biden admits was based on access to his father. But the New York Post is reporting that a grand jury witness in the probe was shown a piece of evidence referencing the "big guy" and was asked to identify him, according to a source.

The Post reported three weeks before the 2020 election that a May 2017 email found on the laptop abandoned by Hunter Biden – which now has been authenticated by establishment media outlets that dismissed it at the time as "Russian disinformation" – specifies 10% of a deal with CEFC China Energy was to be held for the "big guy."

Shortly after the Post published its blockbuster stories on the contents of the laptop, the man tapped by the Biden family to serve as CEO of a new company that would partner the Communist Party-linked energy firm came forward and identified the "big guy" as Joe Biden.

Tony Bobulinski, a Navy intelligence veteran, pointed out in a press conference in Washington that Hunter often referred to his father as the "big guy" or "my chairman." Bobulinski said he met twice face-to-face with Joe Biden, and it was clear that the former vice president – as the true head of the family business enterprise – was vetting him for the position.

Bobulinski stated during that Oct. 22, 2020, news conference that Joe Biden's repeated claims that he never discussed his son's business was a lie. The former Biden business partner held up three smartphones he used during that period that he said contained emails, texts and other documentation supporting his claims. He said Hunter Biden and partner James Gilliar, a former British SAS officer, were "paranoid" about keeping Joe Biden's involvement secret, instructing that it should be discussed only in person.

Bobulinski said he had received a text from Gilliar pleading with him to remain silent, warning that "if you go public, you will bury us."

Late to the story by at least 16 months, the Washington Post recently reported on "verified emails illuminating a deal Hunter Biden developed with a fast-growing Chinese energy conglomerate, CEFC China Energy, for which he was paid nearly $5 million, and other business relationships."

The Chinese firm is the capitalist arm of Xi Jinping's "Belt and Road Initiative," which is regarded as the centerpiece of the Communist Party government's foreign policy. The initiative, which was incorporated into the Constitution of China in 2017, is investing in infrastructure projects in nearly 70 countries around the world to advance Beijing’s objective of assuming global leadership. Critics call it "debt-trap diplomacy," resulting in Beijing taking control over developing nations and even more advanced nations seeking economic relief.

Bobulinski said in October 2020 that he protested to Hunter Biden when the nearly $5 million was wired directly from CEFC to an entity that Hunter and Joe Biden's brother James controlled rather than the new company they had formed, SinoHawk. Hunter Biden, Bobulinski said, argued that CEFC really was investing in the Biden family, and that he, Hunter, was putting the family's name on the line.

'They don't involve the president'
On Sunday, President Biden's chief of staff, Ron Klain, maintained the White House's stance on the Justice Department investigation in an interview with ABC's "This Week."

"Of course the president is confident that his son didn't break the law," Klain said.

"But most importantly, as I said, that's a matter that's going to be decided by the Justice Department, by the legal process."

"This Week" host George Stephanopoulos, referencing the Washington Post's report of the $5 million, asked Klain if he was certain that the deal was ethical.

"The president is confident that his family did the right thing,” Klain replied. "But, again, I want to just be really clear, these are actions by Hunter and his brother. They're private matters.

"They don't involve the president. And they certainly are something that no one at the White House is involved in."

The post Grand jury in Hunter Biden probe asks who is the 'big guy'? appeared first on WND.