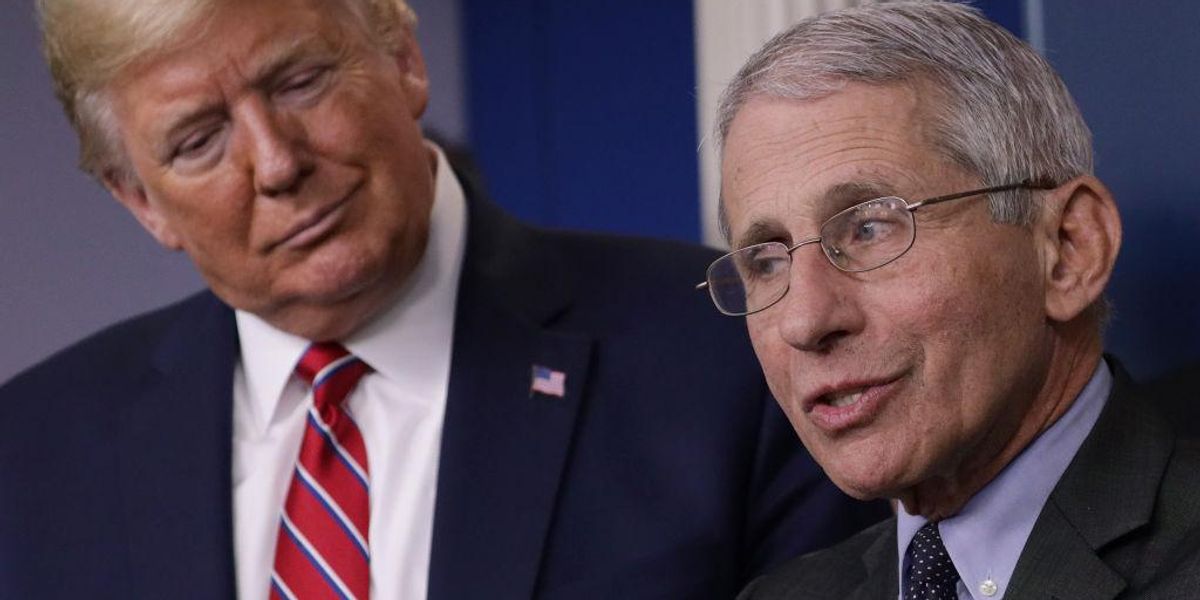 The most influential figure in the United States of America during the coronavirus pandemic was and is Dr. Anthony Fauci, the director of the National Institute of Allergy and Infectious Diseases and the chief medical adviser to the president of the United States.

Fauci was ubiquitous in the American news media throughout 2020 and continuing to today. Once described in the Washington Post as "a kind of public oracle" for the coronavirus pandemic, he has been the leading voice of the federal government's COVID-19 response, the top health expert cited by the White House and by journalists everywhere. He is a pop culture icon, a meme, a celebrity for celebrities, a sex symbol, a figure trusted and beloved by the American people.

And in their new book, "Faucian Bargain," BlazeTV host Steve Deace and contributor Todd Erzen make their case that Fauci is the "most powerful and dangerous bureaucrat in American history."

Their argument, simply, is that Fauci is wrong at least as many times as he is right. But because of the weight of authority given to him by deference from policymakers (chiefly former President Donald Trump) and the endless promotion of his opinions as scientific law by a sensationalist news media, when Fauci is wrong, the consequences are dire.

In "Faucian Bargain," Deace and Erzen challenge the mainstream media narrative of the coronavirus pandemic. They do not argue that COVID-19 isn't a serious pandemic, nor do they dismiss the fact that nearly 550,000 Americans have lost their lives to this deadly disease.

They do, however, suggest with evidence that Fauci's proclamations on the dangers of the virus, on the effectiveness of wearing masks, and on the necessity for lockdowns have been inconsistent and wrong. They call attention to studies that dispute the so-called "scientific consensus" on the effectiveness of nationwide lockdown policies, what Deace and Erzen call "perhaps the dumbest management decision in American history." They cite medical experts from Yale, Stanford, Oxford, and other well-respected institutions of scientific research who have opinions that contradict Dr. Fauci's recommendations.

"Why aren't these counter-experts' opinions as valid?" the authors ask. "Why have we not seen these differing opinions vet each other? How come they're never asked about at White House press briefings with Fauci, who is obviously the biggest influence on American policy at the moment?"

Deace and Erzen fault former President Trump for giving Fauci a prominent national platform to exert his influence in the media, from which he openly contradicted the president's messaging numerous times. They write that Trump "handed over the reins of his presidency to Anthony Fauci indefinitely" when the White House extended "15 days to flatten the curve" to "30 days to slow the spread." They argue the federal government's recommendations during the pandemic, driven by Fauci, gave cover to the several states to enact their own lockdown policies, which had ruinous effects on the economy, mental health, the ability of people to seek treatment for other life-threatening diseases, and other unintended but devastating consequences.

"We, the authors of this book, believe the main reason Trump was not reelected is he never made the decision he should've made — firing Fauci — once it became clear Fauci was behind the curve he was allegedly trying to flatten," Deace and Erzen write.

In one fascinating chapter, sources from the Trump White House, who spoke to Deace and Erzen on the condition of anonymity to speak freely, shared a behind-the-scenes look from their perspective at some of the decision-making that went on in the early weeks of the pandemic. The sources claim that Fauci initially told President Trump and others that "COVID wasn't something that we should be concerned about" and that he would privately tell White House staff they didn't need to wear masks. But once the virus began to spread rapidly in several states, Fauci "changed his tune out of the blue" and began recommending mask-wearing and other policies he had previously argued against.

"He had no studies to point to, and started telling us we were gonna have to wear masks, when he previously pointed to studies that showed wearing masks could even make an outbreak worse because we're constantly touching and therefore tainting the mask or at least rendering it ineffective," the sources claim.

Other chapters of the book are dedicated to disputing the media narrative on Sweden and the global effectiveness of lockdowns, analyzing Gov. Andrew Cuomo's failures in New York, raising questions on the effectiveness of masks, and generally asking questions and raising points the mainstream media has declared verboten.

With over 200 footnotes, Deace and Erzen made sure to back up their claims against scrutiny. The authors invite their readers to go to the primary sources, review the evidence for themselves, and engage in a more meaningful and informed public debate on what happened in 2020 and where we go from here.

The authors want to start an argument. They ask for an open and honest debate of the facts. The American people should welcome one.