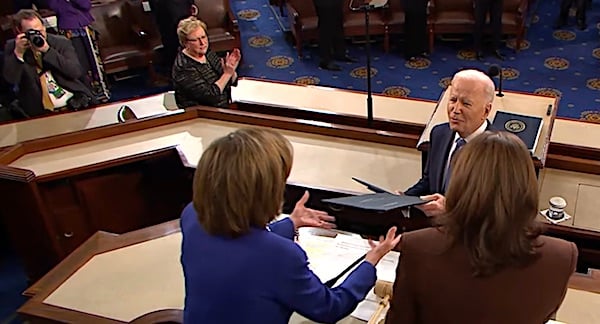 In fact, to those who would commit such offenses, she says "SHUT UP!"

That's, of course, after she, just two years ago, staged a high profile, albeit quiet, protest of her own at a State of the Union.

Which at the time was delivered by President Donald Trump.

She stood up at the end of his speech, just behind Trump, as the cameras were focused on him amid closing applause, and ostentatiously ripped up a copy of his speech.

Summit News reported on her comments this week about GOP Rep. Lauren Boebert, R-Colo., who adopted the protest of Rep. Joe Wilson several years earlier who shouted to Barack Obama that "You lie!"

Boebert, when Biden was talking about America's military heroes, pointed out, loudly, that Biden had arranged for 13 of them to come home in coffins from Afghanistan.

In fact, 13 American service members were lost to a terrorist in the chaos of Biden's abrupt withdrawal of American troops from Afghanistan, a process that left behind hundreds of Americans and thousands of U.S.-supporting nationals to the mercies of the terrorists of the Taliban.

Biden also left behind billions in American war machinery for the terrorists now to possess.

Boebert said, "So Fancy Nancy is upset about me speaking out at the State of the Union. What's she so torn up about? I will not 'shut up' about Biden's failure in Afghanistan and the 13 heroes we lost because of it."

So Fancy Nancy is upset about me speaking out at the State of the Union.

What’s she so torn up about?

I will not “shut up” about Biden’s failure in Afghanistan and the 13 heroes we lost because of it. pic.twitter.com/m3RnO5YiG8

Summit News noted, "Boebert couldn’t take any more of Biden talking about dead troops in a jingoistic fashion and when he said the 'waste of war' put soldiers 'in a flag draped coffin,' Boebert yelled out 'THIRTEEN OF THEM,' referring to the troops who died during Biden’s catastrophic withdrawal from Afghanistan."

President Biden: "And they come home, many of the world's fittest and best warriors...in a flag draped coffin."

Lauren Boebert: "13 OF THEM" pic.twitter.com/ITAYmHwig0

WND reported earlier when Pelosi bizarrely jumped up, ground her teeth and clapped her knuckles together during the speech.

The 81-year-old behaved erratically throughout.

Biden also didn't disappoint those who watch his speeches to see his latest flub – a common occurrence when he addresses anyone. He said, of Vladimir Putin's attack on Ukraine, "He'll never gain the hearts and souls of the Iranian people," when he should have said Ukrainian people.

The post Pelosi blasted for complaint about Republican outburst at State of the Union appeared first on WND.