The Force of the Preamble 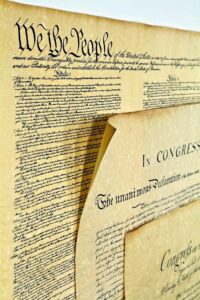 Understanding the Constitution: The Force of the Preamble

My last essay discussed the style of the Constitution’s preamble. Gouverneur Morris, its principal author, composed a passage that was grand, euphonious, and balanced. This essay addresses the preamble’s substance.

The preamble of a legal instrument recites understood facts and the intent and goals of the party or parties creating the instrument. Edward Coke, the 17th-century legal scholar whose writings were at the core of the Founders’ legal education, said a preamble is a “key to the minds of the makers.”

As the U.S. Supreme Court noted in Jacobson v. Massachusetts (1905) (pdf), a preamble isn’t a source of binding rules. Rather, it sheds light on the rules found elsewhere in the document.

Suppose you arrive home to find that your spouse has left you a note. It reads: “We need more food. Please go to the store and buy meat, bread, and vegetables.” The preamble to the list—“We need more food”—explains the rest. It tells you why you’re going and sheds light on the meaning of the three listed items. It informs you that you’re not being asked to purchase firewood, even though firewood is technically vegetable matter.

The Constitution’s preamble reads as follows:

“We the People of the United States, in Order to form a more perfect Union, establish Justice, insure domestic Tranquility, provide for the common defence, promote the general Welfare, and secure the Blessings of Liberty to ourselves and our Posterity, do ordain and establish this Constitution for the United States of America.”

The phrase “We the People” identifies those creating the new government and granting it political power. The term “the people” wasn’t, as sometimes claimed, limited to wealthy white males. In nearly all states, men of very modest means were enfranchised, and some states extended the vote to women, free African Americans, and Native Americans living under state (rather than tribal) jurisdiction.

Outside of the electoral context, the Constitution, as amended by the Bill of Rights, repeatedly employs “the people” to mean all free adults. And as a historical matter, a huge portion of the American populous was active in the debates over the Constitution’s adoption.

In the 18th century, the definitions of “ordain” and “establish” overlapped. However, “ordain” often meant a one-time order or authorization, while “establish” referred to a more time-consuming process. A statute might ordain creation of a postal system, but the postal system was established by the process of erecting buildings, selecting routes, entering into contracts, hiring employees, adopting laws and procedures, and so forth (pdf).

The preamble tells us that the rest of the document ordains the delegation of power to a new political system, which is established under the Constitution.

The preamble lists six goals or reasons why “We the People” are ordaining and establishing the new government. They are as follows:

To render an existing union “more perfect.” Modern commentators often misinterpret this to mean a better union. But in the 18th century, “perfect” usually meant “complete.” This goal was to tighten—make more complete—the union created by the Articles of Confederation.

To “establish Justice.” A core value in the Founders’ political philosophy was government impartiality. Yet some states had acted unjustly by playing favorites among citizens, and the Founders aimed to correct that. Note the word “establish,” which contemplates erecting a just order over time.

To “insure domestic Tranquility.” Peace in the United States was threatened by contention among states and social classes. A stronger central authority could ensure domestic peace.

To “provide for the common defence.” Not only were the Articles of Confederation insufficient for the needs of defense, but they permitted authorities to favor the defense of some states over others—as occasionally happened during the Revolutionary War. The Constitution was designed to provide for the common (universal) defense.

To “promote the general Welfare.” This has nothing to do with the modern welfare state, which nearly all the Founders would have opposed. “General” is a synonym for “common” or universal. It refers to all Americans, as opposed to particular individuals, regions, or interests. “Welfare” means human happiness and flourishing. The phrase “general Welfare” appears later in the Constitution, also. As I shall explain in a future essay, no constitutional phrase is so misunderstood and abused.

To “secure the Blessings of Liberty.” This reflects another of the Founders’ core political values: freedom.

The six goals in the preamble may come into conflict. Excessive liberty may impair domestic tranquility. A large military establishment for “the common defence” may threaten “the Blessings of Liberty.” Government efforts to ensure the “general Welfare” may also threaten liberty.

Commentators sometimes make the mistake of preferring some of the preamble’s goals over the rest. Today, the most common error is to raise the perceived “general Welfare” above “the Blessings of Liberty.” Nothing in the preamble suggests that this is proper. All the goals are of equal importance.

Future essays will explore such issues in more detail.

Robert G. Natelson, a former constitutional law professor, is senior fellow in constitutional jurisprudence at the Independence Institute in Denver. He is the author of “The Original Constitution: What It Actually Said and Meant” (3rd ed., 2015).

The post The Force of the Preamble appeared first on Hunt For Liberty.