They Tried To End Her Life At An Abortion Clinic. She Lived To Tell The Tale. 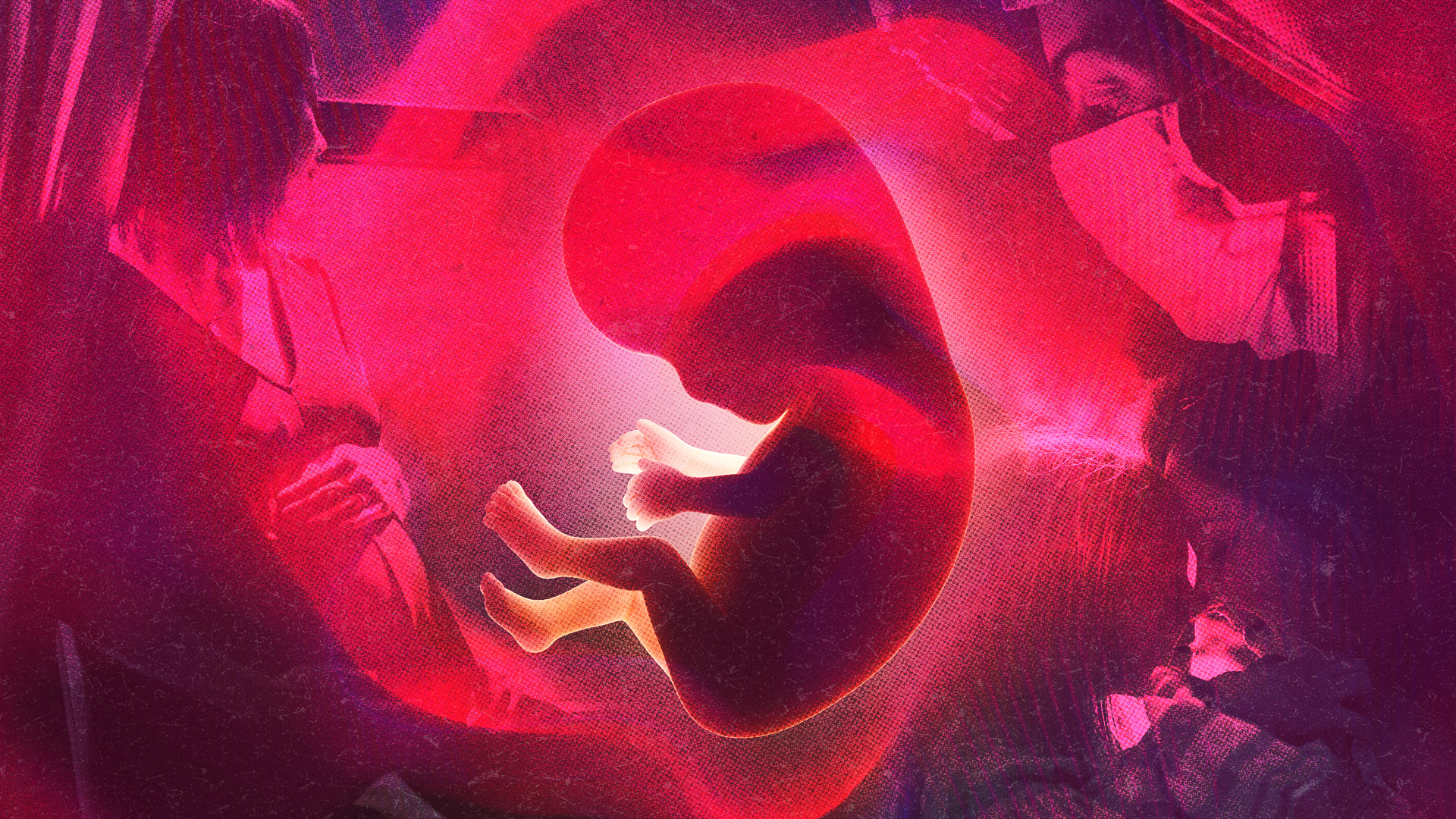 Few face the surgical instruments of an abortion doctor and live to tell the tale.

Hope Hoffman did. And 31 years later, as frenzied abortion supporters react to the news that the monumental Roe v. Wade decision legalizing abortion nationwide has been overturned, she and her adopted mother are sharing her story.

As a 22-year-old single mother of two, Hope’s biological mother was going through a divorce, and she didn’t think she could handle another child. So she tried to abort baby Hope when she was only 10 and a half weeks old.

The abortionist who performed the deadly procedure used a dilation and curettage procedure to perform the abortion on the tiny baby, Hope’s adopted mother, Terri Kellogg, told me in April. That’s an abortion in which the abortionist uses a curette – a sharp instrument or suction device – to kill the child in the first trimester.

This type of procedure can potentially result in infection, perforate the mother’s uterus, damage the cervix, or leave scar tissue in the uterus, leading to miscarriages, painful menstrual cycles, and infertility.

Hope’s biological mother was told the abortion was successful, and she left her procedure thinking the baby was no longer alive, Terri said. “She went home and lived her life.”

But Hope was alive. Somehow, whether by a miracle or some ineptitude by the abortion doctor, she had survived the procedure and was continuing to grow in her mother’s womb.

“God had spared Hope’s life,” Terri told me in an interview earlier this year. “So she continued to grow, and then when she was probably five and a half months, Hope let out a kick.”

It’s hard to fathom the shock and emotion Hope’s biological mother must have experienced when she felt movement within her several months after her abortion — a moment in which she realized the baby whose life she thought she ended was still alive.

Some women might have hurried back to the abortionist to finish off the failed abortion. But Hope’s biological mother decided to choose life for her child instead, and gave her baby up for adoption.

The abortionist’s tools left their mark on her. Hope had a large injury on her head from the failed abortion, described in her medical records as having “the appearance of an old wound,” her adopted mother told me.

Terri said the abortionist had exposed Hope’s brain by scraping her scalp and skull, resulting in lasting brain damage.

When we spoke earlier this spring at a pro-life event in Orlando, Florida, Hope was seated in a wheelchair with braces on her legs, wearing a purple flowered dress and glasses. She has cerebral palsy and epilepsy, along with other health issues, and she doesn’t use one of her arms because of the damage to her brain.

She is 31 years-old now, and she constantly smiles.

“Life without my parents would be…unbelievable,” she told me slowly, choosing her words deliberately.

She held her adopted mother’s hand throughout our conversation, and every so often looked at her with a smile full of love and trust. It brought tears to my eyes. She also met her birth mother when she was about 12 years old.

“I wrote her a letter,” she told me. “And then out of nowhere, she wrote back.”

Hope grew emotional as she shared this first meeting, telling me how she drove with Terri to the airport to pick up her biological mother. As her birth mother approached, Hope said she asked, “Hope, is that you?”

With tears in her eyes, but a smile on her face, Hope told me she responded to the woman who tried to end her life.

“Are you ok?” she said her birth mother asked her, to which she told me she responded, “Yes.”

“It’s going to be ok, Hope,” she described her birth mother saying. “I’m here for you.”

Though Hope told me she does not spend much time with her birth mother, her face lit up with joy as she described this meeting, holding Terri’s hand as she spoke.

“So you have two mothers that care a lot about you!” I said.

“Indeed I do,” she responded, prompting a gentle laugh from Terri at her formality. “I don’t know what I would do without them.”

When asked if she felt any apprehensions about meeting Hope’s biological mother, Terri said she had looked forward to meeting her adopted daughter’s biological mother. “It was an awesome experience,” she said. “We loved her from the beginning because she gave us Hope.”

“When we share her story, we are always conscious that there is someone in the audience, because there are so many women who have had abortions,” Terri added. “We want them to know that there is hope and forgiveness out there. And Hope has always been like that, even with her mother, there’s never been resentment.”

Hope told me there has “never” been hatred in her life. “Never,” she emphasized. “But I will tell you this, people who you see in the world today might change your life as well.”

“Like me and my mom,” she responded. “God has a plan for each of our lives.”

Terri views her daughter’s survival as a miracle, and sees divine direction in the path that led her to baby Hope.

“When she was born she always held her right hand on her wound on her head,” Terri told me. “For the first month of her life, she was fighting to live, and then when they knew that she had made it out of the woods, she was probably still under four pounds, they placed her with a Christian adoption agency.”

“That’s when we came into the picture,” Hope’s adopted mother explained. “We called the Christian adoption agency the same day her birth mother relinquished her, and then she had two more months of hospitalization. When she was discharged we brought her home. She was 6lb, 6oz and that’s when we met her! She was a little premie.”

Doctors told Terri and her husband that Hope would likely require a lot of therapy. I asked Terri if this intimidated them, and she told me with a smile that she was formerly a special ed teacher who had helped with the Special Olympics.

“Many people were discouraging in the beginning because they thought it was too much,” she explained, saying that she was urged to “wait for another child.”

Confident in their decision, they took in Hope as their own, and they have devoted their lives to her for the past 31 years.

“It was just what God had planned for us,” Terri said with a smile.

Terri shared that she is a registered nurse and is involved with the Abortion Survivors Network, a growing community of people who survived abortions and those who care for them.

“We share her story and it just opens people’s eyes to the possibility,” she said.

When I met the two women, it was in Orlando, where we watched Republican Florida Gov. Ron DeSantis sign legislation banning late-term abortions in Florida.

“This is a time when these babies have beating hearts, they can move, they can taste, they can see, they can feel pain, they can suck their thumbs, and they have brain waves,” he added, referring to babies who are 15 weeks or older. “And so this will represent the most significant protections for life that have been enacted in this state in a generation.”

The Florida legislation strikes at the heart of Dobbs v. Jackson Women’s Health Organization, the Supreme Court case involving a 2018 Mississippi law banning abortions after 15 weeks, addressing whether bans on abortion before fetal viability are constitutional.

A leaked draft Supreme Court opinion indicated that the justices weighing Dobbs ruled to overturn Roe v. Wade. The power to decide abortion laws has returned to the states.

Pro-life advocates in a post-Roe v. Wade world are highlighting the many options that women have besides abortion. These options include help and resources for both mother and father from crisis pregnancy centers, maternity homes like Mary’s Shelter in Fredericksburg, Virginia, that offer a place for mothers to live both before and after birth, and adoption.

In her own work as a pro-life advocate, Terri urges others to see that “Hope has changed our lives, as her adoptive family.”

“We see the beauty of every life, no matter the circumstances,” she writes. “Hope is more than a choice, she is our daughter. She deserved life and timely medical care after her survival. Behind the words ‘a woman’s right to privacy’ when it comes to abortion and ‘choice,’ there is a child. My child is Hope.”

The views expressed in this piece are those of the author and do not necessarily represent those of The Daily Wire.