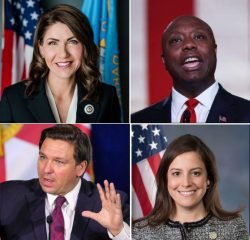 For June’s Top Ten, we have reasons for optimism, and below are just ten of them. As you consider the individuals who make up this list, remember the ‘Rising Stars’ on the other side. Alexandria Ocasio-Cortez? Rashida Tlaib? Stacey Abrams? Democrats and their leftist media are fond of speculating on the demise of the Republican Party. The GOP will be “in the wilderness for many years.” The Republicans are “falling apart before our eyes.” A key feature of their narrative is the attempt to equate the party to one man: Donald J. Trump. And while Trump is undoubtedly the head of the party until the next leader emerges, what if this conjecture from our friends on the left is merely a distraction? What if, in reality, Democrats have scanned the horizon and see a hoard of imposing newcomers setting their sights on the Democrats’ tenuous grip on power? What if, indeed.

Want to feel old? Consider Mr. DiMartino, who was born in 1999 in Venezuela. He’s fluent in Spanish, has credibility when speaking of the horrors of socialism (having not left his devastated homeland until 2016), and he’s extremely intelligent as evidenced by his enrollment in the Ph.D. of Economics program at Columbia University (Yes, he’s still in school). DiMartino has appeared on Fox News and CNN, has written Op-Ed pieces for the Washington Times and USA Today, and has spoken at events for CPAC, Moms for America, and the Heritage Foundation. If this is the first time you’re hearing about young Daniel DiMartino, get ready: you’re going to hear a lot more.

Cameron holds the distinction of being the first black person to hold statewide office in Kentucky, and if we were Democrats that’s all he would need in order to be included on this list. But we’re not Democrats so skin color and genitalia are irrelevant. A.G. Cameron is about much more than his race. Daniel Cameron is only 35-years old, graduated from Louisville University and received his Juris Doctor degree from Brandeis University, and later served as legal counsel to Senate Minority Leader Mitch McConnell (R-KY). But Cameron is perhaps best-known for his handling of the Breonna Taylor investigation. Cameron was fearless in his announcement of the justified findings of the grand jury not to indict any police in Taylor’s death, but also followed up with subsequent explorations into the state’s policies on search warrants. Cameron is bright, brave, and bold.

Trump Jr. is the absolute worst nightmare for Democrats and their media. Like his father, he’s got an Ivy League education having graduated from the Wharton School of Business at the University of Pennsylvania. He’s an extremely successful businessman and leader. He’s got name recognition, obviously, and like his father, he has the ability to appeal to regular Americans despite his wealth. But while his father has a tendency for passionate and sometimes ill-advised outbursts, Trump the Younger is much more measured and methodical. Additionally, Trump has media-savvy former-Fox News personality Kimberly Guilfoyle at his side. It’s anyone’s guess what Trump Jr.’s political plans are, but it’s hard to imagine he’s just going to walk away from politics altogether. And at only 44-years old, Trump Jr. has plenty of time to plot his course.

Another offspring of a famous Republican, Mrs. Sanders grew up in politics with her dad Mike serving as Governor of Arkansas and Republican presidential candidate. Later, of course, she became best known for her service as Press Secretary for President Donald Trump. She was intrepid in her time with the White House, having endured vicious attacks and mockery from the left. She’s savvy, intelligent, very conservative, thinks on her feet, and doesn’t back down from a fight. She’s also a mother of three who happens to be running for Governor of Arkansas. With her brand and name recognition, and at only 39-years-old, Sanders has enormous potential.

Crenshaw seems like he’s been around forever, but he’s only 37-years old. He’s a former Navy Lieutenant Commander and SEAL who lost his right eye serving our country in Afghanistan, as well as a graduate of Harvard University’s John F. Kennedy School of Government with a Master of Public Administration. Crenshaw’s credentials check all the boxes. Some will opine that Crenshaw is insufficiently conservative which doesn’t fly. Crenshaw is plenty conservative. He’s Pro-Life, Pro-Second Amendment, opposes the Affordable Care Act, and was a loyal defender of President Trump. He also has excellent political instincts and a sense of practicality about him. He has frequently appeared on various cable news outlets for a few years now, and we should expect that trend to continue. But we should also expect to see Crenshaw set his sights on higher goals. The U.S. Senate.

At 55-years-old, Senator Scott is easily the oldest member of our list, but that doesn’t mean he’s unworthy. Scott first arrived in Congress just ten years ago as a member of the House of Representatives and is in just his second term in the Senate. Scott got his late start in national politics because he had previously been busy operating a successful business. While he had been fairly visible on cable news and elsewhere over the past few years, he showed up on virtually everyone’s radar in late-April when he offered the GOP’s response to President Biden’s address to Congress. The vitriol and racism with which the left reacted to Scott – calling him, among other things, “Uncle Tim” and “a token” – told us all we need to know about Scott’s credibility. The left and their media don’t react like that to insignificant opponents; they react that way to threats. And that’s what Tim Scott is for Democrats.

Comparing Noem to former Alaska Governor and Vice-Presidential candidate Sarah Palin is understandable. She’s governor of a state with a small population, she’s a Pro-Life conservative, she’s a mother of a large family, and she won a beauty contest in her youth. But Noem is taking a much different path to national prominence than Palin, who jumped from small town mayor, to governor, to VP candidate. Noem served four terms in the U.S. House of Representatives before becoming South Dakota governor in 2019.  She’s been outgoing and highly visible as governor, making the controversial decision not to order a statewide COVID mask mandate and not implementing lockdowns, yet she achieved better results than many blue states. She was also an unabashed, vocal supporter of President Trump. Like Palin, Noem could very well be a Vice-Presidential running mate in 2024, if she doesn’t decide to run for president herself. But with her established familiarity with Washington D.C. politics, we should expect Noem to be better prepared than Palin from a public relations standpoint. Keep an eye on Kristi Noem.

At 41-years-old and only two years into his first term as U.S. Senator, Hawley is just getting started, even though he’s already gained tremendous attention. Hawley objected to the Senate’s certification of Joe Biden as president in January, and along with Sen. Ted Cruz (R-TX) was a vocal supporter of the election protests prior to the January 6th Capitol Riot. As a result, Democrats have tried to pin blame for the riot on Hawley, and they will do everything they can to make that association stick. But Hawley still has a tremendous upside, and don’t be surprised to see him soar even with the left’s attacks. Hawley graduated from Stanford University and Yale Law School, he was a terrific Attorney General of Missouri which led to his senatorial election, and he’s tenacious. Josh Hawley isn’t going anywhere but up.

Stefanik is only 36-years-old, and already ranks number three in the House GOP leadership, having been elected by her peers to replace Rep. Liz Cheney (R-WY) in that position just last month. The Harvard graduate is vocally Pro-Life, opposes Obama Care, and called out the Russia Hoax for the absurdity that it was. But Stefanik is most well-known for her performance during the House Hearings on President Trump’s first impeachment over the Ukraine nonsense. Stefanik was relentless, articulate, and dogged in her defense of Trump, and her calling out of Rep. Adam Schiff (D-CA) for his ridiculous management of those hearings was epic. Elise Stefanik is smart and unafraid, and she’s going to be around for a long time.

Already a star, you say? How can he still be on the rise, you ask? It’s easy to forget, DeSantis only became governor two years ago, and he’s the youngest governor in the country at only 42-years-old. His star still has a long climb ahead of it. DeSantis is the whole package, and his résumé is fantastic. He graduated from Yale University, went on to graduate from Harvard Law School, and then punched his ticket as a naval officer in the JAG Corps. More importantly, he’s been phenomenal as governor. With the second-oldest population in the country, we all should have expected COVID to devastate Florida, but it didn’t. Florida currently ranks in the bottom-half of all states in COVID deaths-per-million, despite DeSantis’ much more liberty-oriented approach to lockdowns which kept his state in much better financial shape than others. He’s staunchly conservative, he’s got charisma, and he also seems to have learned how to counterpunch from President Trump. When the left lost their collective minds over Georgia’s election integrity bill in April, did DeSantis shy away from the debate? On the contrary. Not only did he sign a similar bill into law just a month later, he did so on live television, and not just any live television. He signed it into law on the Fox News Channel. DeSantis has chutzpah, and he currently has to be considered the clear favorite for the GOP’s presidential nominee in 2024 should Trump not run. There are some terrific names on this list, but DeSantis was a no-brainer for the #1 slot.

Top 10 Rising Stars of the Republican Party is original content from Conservative Daily News - Where Americans go for news, current events and commentary they can trust - Conservative News Website for U.S. News, Political Cartoons and more.