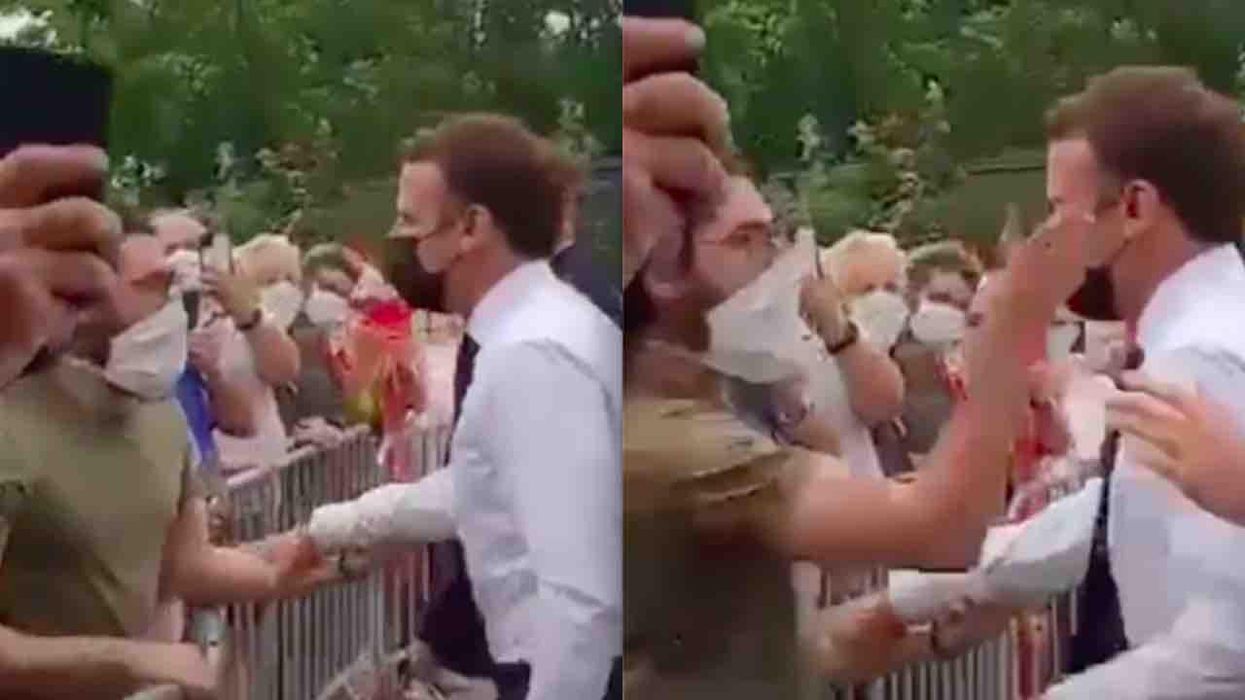 French President Emmanuel Macron was slapped in the face by a man he greeted on the other side of a security barrier during a Tuesday visit to the southeastern region of the country, Reuters reported.

What are the details?

Video of the incident shows Macron, dressed in a white dress shirt, extending his arm toward a man dressed in a green shirt. Suddenly the man slaps Macron's left cheek, and security swiftly takes the culprit down.

Reuters said prior to delivering the slap, the man could be heard shouting "A Bas La Macronie," which means "Down with Macronia." The outlet added that the man also shouted "Montjoie Saint Denis" — the battle cry of the French armies when the country was still a monarchy.

While Macron was ushered from the spot of the slap, he remained near the crowd for a few more seconds and also appeared to talk to someone on the other side of the barrier, Reuters said.

Two 28-year-old men — the man who slapped Macron and another accompanying him — were in police custody at 1:45 p.m. for alleged violence against a person holding public authority, CNN reported, citing the prosecutor's office of the city of Valence.

The identity and motive of the man who slapped Macron were unclear, Reuters reported.

Macron's visit involved meeting restaurateurs and students to discuss life returning to normal amid COVID-19, Reuters also said. Bars and restaurants will be able to reopen to indoor customers after seven months of closure, BBC News reported, adding that France's overnight curfew on Wednesday is being pushed back from 9 p.m. to 11 p.m.

BBC News also said Macron had just visited a hotel school in Tain-l'Hermitage and that his visit to the area was set to continue Tuesday.

Prime Minister Jean Castex told the National Assembly that while democracy means debate and legitimate disagreement "it must never in any case mean violence, verbal aggression, and even less physical attack," the network said.

Far-left leader Jean-Luc Mélenchon tweeted his "solidarity with the president" after the incident, BBC News said, while far-right leader Marine Le Pen — a prominent Macron rival — said that "while democratic debate can be bitter, it can never tolerate physical violence."