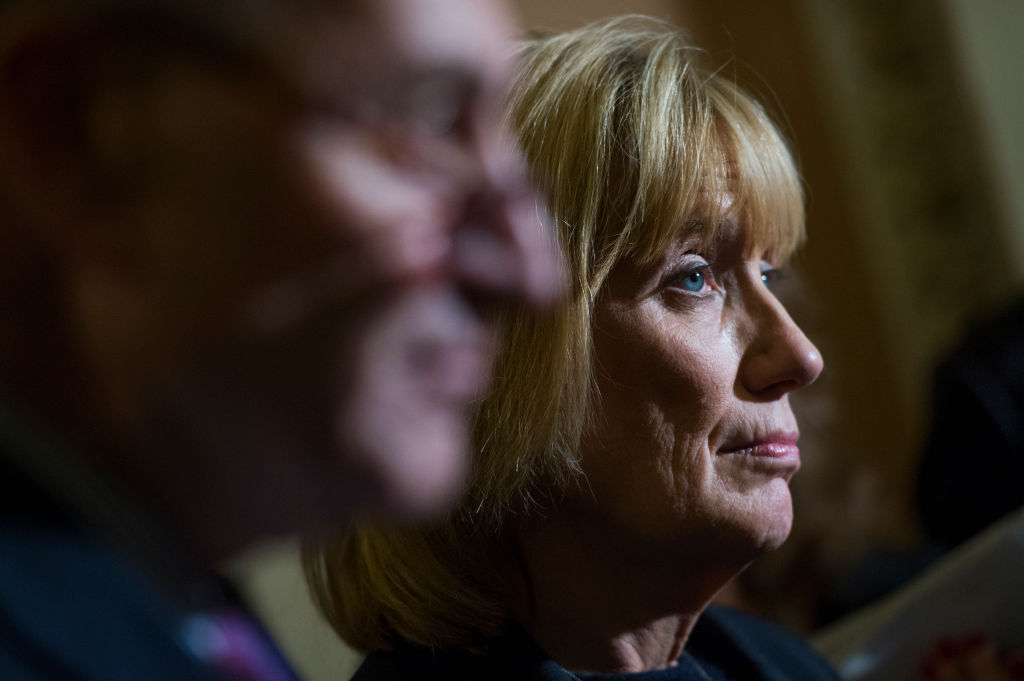 When New Hampshire‘s Sen. Maggie Hassan, one of the Senate’s most vulnerable Democrats, heard the Supreme Court had overturned Roe v Wade, she swiftly dug her heels in on abortion.

The polarizing issue could cost her with Granite State moderates, but the former governor, who is bidding for a second term in the Senate, took a strong stance. She also made her position — in support of abortion all the way through the third trimester — part of her campaign in the November election.

“This decision catapults us backwards,” Hassan declared in a June 30 ad released less than a week after the court’s decision. “We will not be intimidated. I will fight and never back down.”

In response, her Republican challengers are saying Hassan is not on the same page with New Hampshire voters at all when it comes to abortion.

Candidates in the crowded GOP primary field are eager to expose what they say is an extreme abortion agenda that doesn’t reflect what New Hampshire residents want.

A 2021 University of New Hampshire poll found that a majority of Granite Staters, 58%, want at least some restrictions on abortion, and 38% think abortion should be legal in all circumstances. More broadly across the country, since 1996, only about 28% of Americans have ever thought abortion should generally be legal in the second trimester, according to Gallup.

Hassan is endorsed for reelection by Planned Parenthood Action Fund. Last June, 64-year-old Hassan co-sponsored the Women’s Health Protection Act (WHPA) along with other Senate Democrats, a bill that would force several pro-abortion goals that are not even close to being supported by a majority of Americans. In February and again in May, Hassan backed attempts to bring the proposed law to the Senate floor for a vote.

The audacious bill would nix state laws that restrict abortion, forcing states to allow abortion through all nine months of pregnancy up to the day of birth. It would do away with parental notification laws like New Hampshire’s current one, and it would likely force medical personnel to violate their consciences and participate in abortions. The law’s text is explicit that it would supersede the Religious Freedom Restoration Act.

“WHPA will essentially legalize abortion throughout all nine months of pregnancy and undo every state law that has protected children in the womb,” said Democrats for Life America.

New Hampshire had no restrictions on abortion until last year, when Gov. Chris Sununu (R) signed the state’s current 24-week abortion ban. Since then, state lawmakers have added an exemption for fatal fetal anomalies.

State Senator Chuck Morse, one of the Republicans running against Hassan, oversaw the passage of the 24-week ban as New Hampshire’s current Senate president.

Morse said he believes Hassan has gone “way too far” on abortion and “against what I believe the people of New Hampshire stand for.”

“She believes in abortion throughout the pregnancy and she believes the federal government should be paying for it. That’s unheard of and it’s not acceptable,” Morse told The Daily Wire.

Morse added on the parental notification issue that, “I think the public here want to know what their child’s doing, not only in that category, but in many other categories.”

Retired Army Gen. Don Bolduc is the most well-known of the Republican candidates after he ran for Senate in 2020.

About a third of GOP primary voters say they plan to vote for Bolduc, but 58% are still undecided, partly due to the lack of name recognition in the Republican field, according to an April University of New Hampshire poll.

Bolduc accused Hassan of “throwing gas on the fire” of the Supreme Court’s decision and said it will make her more vulnerable in the election.

“New Hampshire voters, regardless of party, do not approve of partial birth abortion and abortion up to the time of birth. This is her position. This is absolutely a wrong position when it comes to where Granite Staters think about it,” Bolduc told The Daily Wire. “But she doesn’t look at it that way. She wants to put fuel on the fire to create divisiveness again, to detract from the other really bad things she’s doing.”

“I believe women on both sides of this issue have a better chance of addressing this at the state level and having a bigger voice than they do at the federal level. The federal level has done nothing but create divisiveness, hatred,” the former general said.

Hassan “doesn’t want to lose that leverage because she knows that it plays well for her in commercials and sound bites,” Bolduc said.

Kevin Smith was the director of a conservative advocacy group in New Hampshire that emphasizes pro-life issues, and he has a long pro-life record stretching back to when he was a 19-year-old member of the state House and sponsored a ban on partial-birth abortion.

“She holds an extreme position on this issue that is vastly out of touch with where most Granite Staters are on the polls,” Smith, who was also town manager of Londonderry, New Hampshire, told The Daily Wire.

“Does New Hampshire lean more pro-choice than pro-life? On the surface, yes. But then when you dig into the numbers, you see that most Granite Staters support at least some restrictions on later term abortions. And when they find out Maggie Hassan, isn’t there it makes her appear as though she’s extreme,” Smith said.

Vikram Mansharamani, a finance expert and academic as well as a political outsider, said Hassan’s push for late-term, third trimester abortions is an example of Democrats “working hard on finding an issue that they think they have the upper hand on.”

“I don’t know many Americans that support that,” Mansharamani said.

Bruce Fenton, a financier who has made millions from Bitcoin, is the most libertarian candidate running against Hassan and said her insistence on making legal, late-term abortion a federal issue will ultimately hurt her.

“It’s one of many tactical and strategic blunders that her campaign keeps making, that just shows how out of touch she is with the voters and with reality,” Fenton told The Daily Wire. “Her very, very extreme position on abortion, which is that she feels that it’s a tent pole of her campaign to have a federal mandate that has abortions all the way up until one day before birth is just not a mainstream position, and it just doesn’t make sense.”

So far, most polls show Hassan with a tiny lead but effectively tied in a matchup between her and individual GOP challengers.

The good news for Republicans is that Hassan has become very unpopular in New Hampshire lately. A 51% majority of residents view her unfavorably, and only 35% view her favorably, according to the UNH poll.