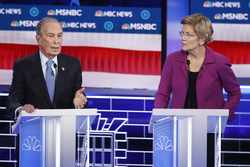 LAS VEGAS — In this desert city built on hopes, dreams and neon lights, former New York Mayor Michael Bloomberg made a wild gamble to emerge from the protective bubble of his $400 million ad campaign and face five rivals for the Democratic nomination head-on in a nationally televised debate.

The high-stakes debut ended up as a bust – all under the glare of the intense media spotlight.

Bloomberg, who decided to skip the early voting primary and caucus states in favor of delegate-rich Super Tuesday, wasn’t ready for prime time. He seemed detached, unprepared, and out of touch with working-class voters. The media and financial mogul was surging before Wednesday night, but limped away from the stage having accomplished the opposite of what he set out to do.

The much-ballyhooed billionaire, touted as the savior who could rescue the Democratic Party from itself – or rather, from its insurgent socialist wing — and take the fight to Donald Trump with an endless supply of cash, took a beating from the other candidates and the debate moderators. And the end of the night it must have seemed apparent to him that he’d brought a wallet to a knife fight. Bernie Sanders, the man Bloomberg set out to stop, emerged from the night virtually unscathed.

The pummeling started just seconds into the debate when Sen. Elizabeth Warren interrupted Sanders’ own attack on Bloomberg, going straight for the jugular.

“I’d like to talk about who we’re running against: a billionaire who calls women fat broads and horse-faced lesbians. And no, I’m not talking about Donald Trump. I’m talking about Mayor Bloomberg,” Warren said to gasps from the audience.

“Look, I’ll support whoever the Democratic nominee is,” she said. “But understand this: Democrats take a huge risk if we just substitute one arrogant billionaire for another.”

In the general election, Democrats hope to capitalize on one of President Trump’s biggest weaknesses – suburban women swing voters who helped hand control of the House of Representatives to Nancy Pelosi in 2018. But allegations about Bloomberg’s crass, sexist statements over the years have piled up in recent weeks, giving his fellow Democratic contenders plenty of ready ammunition against him.

Moderator Hallie Jackson asked him about allegations that his company created a hostile workplace for women, and noted that his defense when confronted was “That’s the way I grew up.” She also cited a lawsuit in which one former female employee alleged that he said, “I would do you in a second.”

Flummoxed for some reason by this line of questioning – what did he expect? — Bloomberg’s answer was eerily similarly to Trump’s when confronted by instances of appalling treatment of women in his past: He touted all the leadership positions women have in his company.

“In my foundation, the person that runs it is a woman, 70% of the people are women,” he said. “In my company, lots and lots of women have big responsibilities.”

Jackson turned back to Warren to see if the answer satisfied her, and the Massachusetts senator delivered another haymaker.

“I hope you heard what his defense was: ‘I’ve been nice to some women,’” Warren said to loud applause and cheers from the crowd.

She didn’t let up on the issue, instead pressing Bloomberg on whether he would release former female employees from nondisclosure agreements he had required them to sign.

Trying to shake off the question, Bloomberg stammered, “That’s up to them. … They signed those agreements, and we’ll live with it.”

He had asserted that “we have very few nondisclosure agreements. None of them accused me of doing anything – except, maybe they didn’t like a joke I told,” a defense that elicited boos from some in the audience. The former New York City mayor also brought Trump to mind by equivocating about the release of his taxes, which every other Democrat on the stage had done — and the president still has not done to this day.

When Minnesota Sen. Amy Klobuchar pressed Bloomberg on the issue, he boasted of his vast fortunes and how they complicated the task.

“Fortunately, I make a lot of money, and we do business all around the world, and we are preparing it. The number of pages would probably be in the thousands – I can’t go to TurboTax,” he quipped.

Klobuchar was having none of it. Pointing to her husband in the hall, she deftly tipped her cap to middle-class voters by saying that her family probably could use TurboTax, suggesting that being rich enough to afford an army of accountants – Trump’s rationale – was no excuse at all.

“It is a major issue, because the president of the United States has been hiding his tax returns, even when courts order him to come forward with those tax returns,” she said. “I don’t care how much money anybody has.”

Late in the debate, moderator Chuck Todd asked Bloomberg about Bernie Sanders’ disdain for billionaires, pointedly pressing him if he should “exist” at all. Sanders didn’t flinch in arguing Bloomberg’s vast wealth – he’s worth an estimated $60 billion — is flat-out unjustifiable.

Bloomberg, who opposes the wealth tax that Sanders and Warren support as a way to pay for “Medicare for All” and a vast array of other government programs, lost an opportunity to make common cause with his workers when he flatly replied that yes, he deserves all the money he makes: “I worked very hard for it. And I’m giving it away.”

Toward the end of the debate Bloomberg did manage to land a telling blow at Sanders when he suggested that America was doing pretty well when the country’s “best-known socialist happens to be a millionaire with three houses.”

By that time, the Democratic showdown had become a vicious free-for-all, with most of the candidates roughing each other up with sharp jabs and highly personal shots. Warren, after falling to a fourth-place finish in New Hampshire, was the most aggressive on the stage, landing the most punches as she worked to re-energize her campaign and supporters ahead of Saturday’s Nevada caucuses.

Sanders went on the attack against Bloomberg over the stop-and-frisk policing policies that targeted young black men when he was mayor.

“In order to beat Donald Trump, we’re going to need the largest voter turnout in the history of the United States,” Sanders said. “Mr. Bloomberg had policies in New York City of stop-and-frisk, which went after African American and Latino people in an outrageous way. That is not a way you’re going to grow voter turnout.”

Bloomberg tried to counter by arguing that Trump would beat Sanders by tarring him with the socialist label and by scaring voters wary that he would take away their private health insurance and replace it with a government-run single-payer plan.

“You don’t start out by saying I’ve got 160 million people I’m going to take away the insurance plan they love,” Bloomberg argued.

The former mayor also repeated his apology for the stop-and-frisk policy.

“If I go back and look at my time in office, the one thing I am really worried about, embarrassed about, is how it turned out with stop-and-frisk,” he said.

Joe Biden accused Bloomberg of being untruthful about the timing of his decision to curb the policy, which he said impacted 5 million young black men. That policy wasn’t eased, the former vice president asserted, until the Obama administration sent in federal monitors to rein it in.

“Let’s get the facts straight. Let’s get the order straight,” Biden said. “And it’s not whether he apologized or not. It’s the policy. The policy was abhorrent. And it was a … violation of every right people have.”

Warren also joined in the pile-on over stop-and-frisk.   “It targeted communities of color. It targeted black and brown men from the beginning,” she said. “And if you want to issue a real apology, then the apology has to start with the intent of the plan as it was put together and the willful ignorance, day by day by day, of admitting what was happening even as people protested in your own street.”

Warren was on the hunt for new momentum after her poor showings in first two voting states, where she finished third and fourth, respectively. She and others had Bloomberg in their crosshairs after an internal campaign memo leaked that argued for nearly all of the candidates to step aside and allow him to go toe-to-toe with Sanders and then, presumably, Trump. Sanders, the memo said, will be nearly unstoppable on his way to the Democratic nomination unless the other moderate candidates drop out.

Even before the debate, Warren promised it would showcase a “live demonstration of how we each take on an egomaniac billionaire.”

Hours afterward, her campaign announced it had collected a total of $1 million just that night, a much-needed financial shot in the arm but one that may be too little too late for her to claw her way back in the polls and successfully compete in the delegate-rich Super Tuesday fight early next month.

Bloomberg’s campaign tried to put the best spin on his first performance, arguing afterward that with all the other candidates gunning for him, he “weathered the storm” and defined the battle lines between himself and Sanders.

“He drew the contrast between two of them and their visions to make it clear this is basically a two-person race,” Bloomberg spokesman Howard Wolfson told reporters in the debate spin room.

Allison Stephens, a Warren supporter and DNC committeewoman, said it was Warren who “really shined” by putting a spotlight on Bloomberg’s treatment of women.

“She was able to bring that record out and really expose it and that speaks to women like me,” she told RealClearPolitics.

Ohio state Sen. Nina Turner, a top Sanders surrogate, said all of the candidates “called Bloomberg out for what he is – a very wealthy guy who tried to buy his way onto the stage.”

“His record cannot stand up to the scrutiny of what it takes to build a broad-based coalition,” she told RCP.

“Line up his record, and line up President Trump’s record, and there are a lot of similarities there,” she said.

Share This Post
Like it? Vote it up!
00
Previous Article1619, and Respecting the Facts of America’s FoundingNext ArticleEmory, Outrage & the Roots of Campus Victimology
You May Also Like
Assault on America, Day 91: Joe Biden just the latest creep calling the Democrat Party home
April 3, 2019

What Iran Will Do Next, and How to Stop It
August 4, 2019
AARP Sweetheart Deals with Federal Government Face Renewed Scrutiny
April 8, 2019
We Will Survive Trump. Probably.
March 10, 2019
The (Political) Case for Impeachment Doesn’t Hold Up
May 27, 2019
In South Carolina, Harris and Biden in Black and White
July 11, 2019

Last month, I was supposed to give a speech at Emory University about diversity and knowledge. But the campus Left couldn't let someone question its dogma without putting up a fight. Source link Veterans In Defense Of Liberty - Vidol

1619, and Respecting the Facts of America's Founding

Beneath the rancor of our everyday politics rages a longstanding debate instigated by professors and journalists about the convictions that truly underlie the founding and unfolding of the United States of America. The bitter clashes between politicians grab most of the headlines. But because it will shape the education of