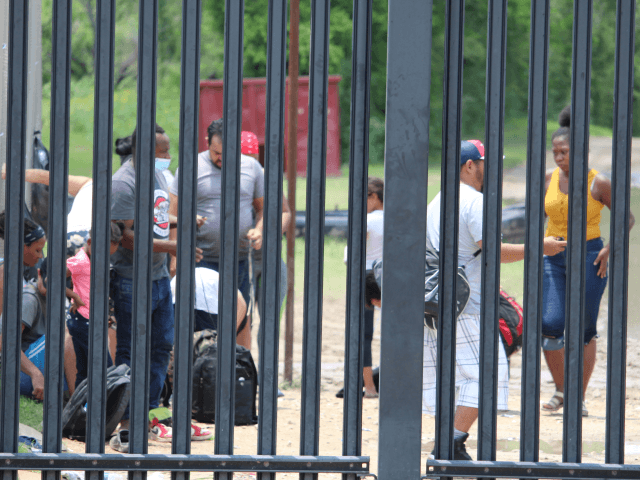 A source within Customs and Border Protection says the Border Patrol is facing overcrowding issues again at particular facilities within the Del Rio Sector of Texas. On Monday, more than 400 migrants surrendered in Del Rio alone. The mostly Haitian and Venezuelan migrants are contributing to the overcrowding.

At one facility in Eagle Pass, a soft sided structure was constructed to help deal with the current crisis and has yielded unprecedented migrant traffic levels. The source notes the newer facility is currently 200 percent over the COVID capacity standard.

The facility is more than 300 detainees over its 500-max capacity. Several sites are dealing with COVID-19 positive detainees who need isolation, according to the source.

In the Rio Grande Valley, more than 4,000 migrants are currently being detained.

On Tuesday, heavy rains offered some reprieve from the mass entry of migrants in Del Rio. The downpours brought water levels in the Rio Grande too high to wade across, slowing entries.

Randy Clark is a 32-year veteran of the United States Border Patrol.  Prior to his retirement, he served as the Division Chief for Law Enforcement Operations, directing operations for nine Border Patrol Stations within the Del Rio, Texas, Sector. Follow him on Twitter @RandyClarkBBTX.

Will the Supreme Court Stand Up for Reality?
October 9, 2019

The jobs market’s progress appeared to stall last week. New claims for unemployment benefits soared by 51,000 to 419,000 for the week ended July 17, the Department of Labor said Thursday. Economists had forecast 350,000 new claims, a decline of 10,000 from the previous week’s initial estimate of 360,000. That estimate was

Ben & Jerry’s ice cream company faced a wave of backlash on Monday after announcing plans to boycott Jewish settlements in the West Bank and East Jerusalem, or what it termed “Occupied Palestinian Territory,” with many calling out the Vermont-based company’s hypocrisy and double standards. “We believe it is inconsistent with