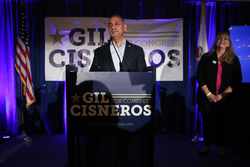 California Democrats completed their sweep of GOP-held congressional seats in the once conservative stronghold of Orange County last fall when self-funding lottery winner Gil Cisneros squeaked out a victory. His race against businesswoman Young Kim was considered one of the closest and craziest of the cycle.

The same congressional district, a Southern California crossroads that is the birthplace of Richard Nixon and home to his presidential library, could prove the Republicans’ best chance of pushing back again that blue tide in 2020, new GOP polling suggests.

Cisneros is trailing a Republican challenger, 46%-44% (with 9% undecided), according to a new survey conducted on behalf of the National Republican Congressional Committee and released to RealClearPolitics.

The poll, taken June 30 to July 2, surveyed 400 likely 2020 voters across California’s 39th Congressional District. The margin of error was plus or minus 4.9 percentage points.

The NRCC isn’t taking sides in the primary, so it’s not saying which GOP candidate it asked voters to consider in a head-to-head match-up against Cisneros, but Kim is running again — along  with another Republican and an independent — and boasts the most political juice and name recognition.

House Minority Leader Kevin McCarthy, a fellow Californian, endorsed Kim back in April, calling the former state legislator a “fierce campaigner and one of the top recruits in the country for House Republicans.”

The poll also shows Cisneros trailing against a named Republican in a liberal portion of the district — San Bernardino County, 49%-43% (with 6% undecided), and by four percentage points district-wide among men, 48%-44% (with 8% undecided). Cisneros, a Navy veteran and former Frito-Lay executive whose lottery winnings allowed him to pour $9 million into his 2018 campaign, only boasts a 34% favorable vs. 30% unfavorable rating.

The Democratic Congressional Campaign Committee did not respond to a request for comment.

Republicans say the numbers show that Cisneros is having a hard time shaking the impact of many House Dems’ far-left turn spearheaded by New York Rep. Alexandria Ocasio-Cortez and her supporters since winning back the majority last fall. Fifty-seven percent of district voters view socialism in a negative light, the poll found.

“The bottom line is that Gil Cisneros’ socialist Democrat House majority is out of step with his district,” the NRCC memo on the poll concludes.

The freshman lawmaker is trying to straddle the fence and avoid labels, but it’s unclear how long he can continue that balancing act. In his first months in Congress, he joined both the Progressive Caucus and the centrist New Democrat Coalition, telling the Los Angeles Times that they both “reflect parts of who I am.”

During the 2018 campaign, the national media touted Cisneros, as well as fellow Democrat Harley Rouda, who also won an Orange County congressional seat, as former Republicans. But both candidates took far-left positions in the primary — positions they tried to distance themselves from in the homestretch of the general-election campaign.

During an April 2018 debate sponsored by Democratic billionaire Tom Steyer’s environmental advocacy group, NextGen, Cisneros repeatedly raised his hand in support of a host of liberal policies, including backing a single-payer health care system and “sanctuary city” policies opposing local police departments’ ability to cooperate with ICE, a video of the event shows.

New GOP polling also gives credence to Speaker Nancy Pelosi’s warnings against a rush to impeach President Trump. An NRCC poll of five battleground districts across the country, including Cisneros’ and that of Democrat Katie Porter, found support for impeachment hovering between 29% and 35% in each district. Those opposing ranged from 57% to 60% in the same districts.

Cisneros has largely avoided the question but can’t do so forever. Last month, Porter, another freshman who flipped an Orange County seat in 2018, announced her support for impeachment, triggering an NRCC digital ad campaign blasting her for being “willing to thumb her nose are her constituents, the majority of whom oppose impeachment.”

Also, Steyer, the latest entrant into the Democratic presidential primary, is ratcheting up the pressure on party lawmakers to impeach Trump and will undoubtedly make it a central focus of his White House bid.

Steyer, through his NextGen Climate Action Committee, was one of Cisneros’ top political donors, cutting him $144,300 worth of checks last cycle.

Share This Post
Like it? Vote it up!
00
Previous ArticleAmazon Thanks GOP/Dems for Passing Green Card Giveaway for Big TechNext ArticleThere’s No Reasonable Defense of Obamacare
You May Also Like
Stunned Steve Kornacki Takes Over Moments After Chris Matthews’ Abrupt Resignation
March 3, 2020
CNN Officially Out Of Investigative Journalism
March 29, 2019

There's No Reasonable Defense of Obamacare