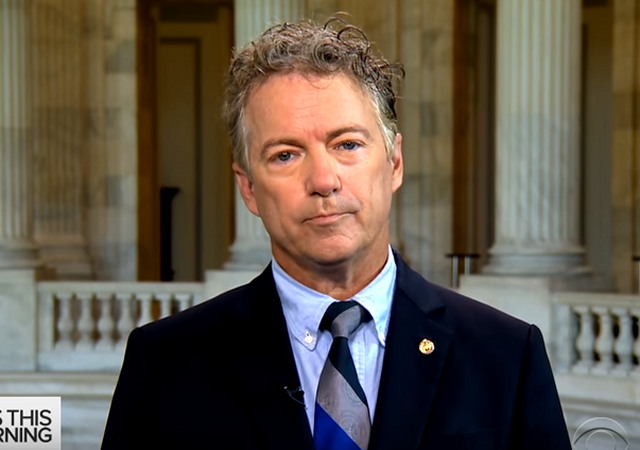 With President Trump now exonerated on allegations that he colluded with the Russians in 2016, thoughts turn to what President Obama knew and when he knew it.

Add Sen. Rand Paul (R-KY) to the growing list of high-profile Republicans who want to know what President Obama himself knew at the time about the investigation into Russian interference in the 2016 elections.

I agree with @kimguilfoyle Time for Congress to investigate. What did President Obama know and when? How did this hoax go on for so long unabated? https://t.co/fgJZaqR6cI

In previous postings, he stopped short of calling for an investigation of Obama directly. For instance, on Monday he tweeted that Obama administration officials “who concocted and spread the Russian conspiracy hoax” must be investigated:

Time to investigate the Obama officials who concocted and spread the Russian conspiracy hoax!

Back in December, Paul speculated that information gleaned from these officials during a future investigation could ultimately make the fake Russian collusion scandal “WORSE than Watergate”:

Time to investigate high ranking Obama government officials who might have colluded to prevent the election of @realDonaldTrump! This could be WORSE than Watergate!

President Obama was aware of the FBI investigation in 2016. As to why he never said anything publicly prior to December, Vice President Joe Biden said Obama was asked not to by Sen. Mitch McConnell:

Obama reportedly was informed by the FBI in 2016 that the bureau was investigating Russian attempts to interfere in the 2016 election, but, according to former Vice President Biden’s telling, Obama was warned against going public with the investigation by Senate Majority Leader Mitch McConnell (R-Ky.).

Obama, during his tenure, said he confronted Russian President Vladimir Putin about Russian interference in the 2016 election. The former president, according to The New York Times, said he told Putin “to cut it out, there were going to be serious consequences if he did not.”

The timing of Obama’s remarks was both convenient and suspicious: They were made in December after the election was over and when the presidential transition was underway. What better way to begin the process of undermining the incoming administration than to plant the first official seeds of doubt as to its legitimacy just weeks before Trump was sworn in?

McConnell, for his part, is pushing back on repeated attempts by Obama-era officials like Biden and others who have said it’s his fault the American people were kept in the dark about the investigation until after the election was over:

[On Monday] McConnell said [Attorney General William] Barr concluded Russia had carried out online disinformation campaigns and computer hacking efforts aimed at sowing discord and influencing the 2016 election, but the senator blamed the Obama administration for not doing more to counter those efforts.

“It is deeply disturbing that the Obama administration was apparently insufficiently prepared to anticipate and counter these Russian threats,” McConnell said in a Senate floor speech. “It was hardly a secret prior to November 2016 that Putin’s Russia was not and is not our friend. And yet, for years, the previous administration ignored, excused and failed to confront Putin’s malign activities, both at home and abroad.”

He also said the investigation into Russian interference in the 2016 election should continue.

Sen. Lindsey Graham (R-SC) agrees – but has been even more specific in his remarks about what he’d like to see:

But Graham also said he would soon ask Barr to appoint a special counsel to determine whether the Obama administration’s Department of Justice unlawfully obtained a warrant to spy on a Trump associate as a way to help bolster Clinton, Trump’s 2016 Democratic challenger. That special counsel, Graham said, might also look into the Obama-era FBI’s handling of an investigation into Clinton’s use of private emails.

Graham signaled he was prepared to hold Judiciary Committee hearings on these topics, too.

Here’s video of Graham talking about this on Monday:

Lindsey Graham is calling on Attorney General Barr to appoint a Special Counsel to look into FISA abuse and other activities by the DOJ, FBI and Obama Administration.

It goes without saying that the timing of the investigations would be seriously inconvenient for Joe Biden’s (upcoming) presidential run, and the findings from it could potentially derail the left’s hopes of taking back the White House altogether.

Look for Democrats, especially those running for president, to play up the political angle of Paul, Graham, and others calling for an investigation into Obama-era officials at a time when the 2020 election cycle is kicking into high gear. But considering what they tried to do for the last two years – and what they will continue to try to do, Democrats really have no room to talk.

President Donald Trump ripped into Chicago prosecutors for dropping charges against Jussie Smollett after he allegedly staged a fake attack against himself, calling it a "terrible situation." Source link

Maddow and others in the “Resistance Media” will find something else to peddle. Grifters gonna grift. On March 14, 2017, less than a month after Donald Trump’s inauguration, Rachel Maddow and MSNBC hyped a big get. Maddow obtained Trump’s tax returns. Before the tax returns were rolled out, Maddow and MSNBC began to