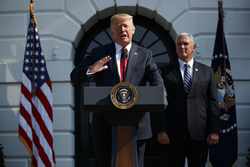 “Let me tell you exactly what my message is,” President Trump once said to reporters as his administration remained embroiled in a legal battle over the Affordable Care Act. “The Republican Party will soon be known as the party of health care. You watch.”

That was in March, and rebranding efforts since then have been less than successful. Instead, Obamacare — albeit abbreviated significantly through legal challenges and executive orders — remains the law of the land. Meanwhile, “Medicare for All,” or some iteration of it, is increasingly becoming party orthodoxy for Democrats.

With the presidential election year fast approaching, health care regularly ranks as one of the top issues for voters, and Republicans seem unprepared to create a contrast with their competition. Enter billionaire Bernard Marcus, co-founder of Home Depot and personal friend of Trump.

Marcus has funded a survey of more than 20,000 patients and doctors, other health care providers and small-business owners to develop a framework for a plan that his network hopes congressional and administration Republicans will adopt in time for the election. A product of the conservative Job Creators Network and Physicians for Reform, the blueprint is touted as a personalized plan to compete with Obamacare and Medicare for All.

They call it “Healthcare for You,” and they plan to spend a quarter-million dollars just rolling it out. The first television ad drops Thursday on the heels of the latest Democratic primary debate.

The spot begins with a stand-up comedian saying: “So a politician, a bureaucrat, and lobbyist all walk into a hospital room. They say, ‘Don’t worry. We are here from big medicine. We are here to help.’” The crowd guffaws. He follows up with a joke about Medicare for All being “mediocre for all.”

And then an ominous voice-over cuts through laughter to warn that “problems with government-run health care would be comical, if they weren’t true.” Viewers are then directed to visit a website attacking Obamacare, citing its failure to reduce premiums, and lambasting Medicare for All by comparing it to beleaguered European public systems.

So, what exactly are the two groups pushing as a health care alternative after Republicans failed to repeal Obamacare while in control of the House, the Senate and the presidency?

According to literature reviewed by RealClearPolitics, the proposal is a grab bag of reforms aimed at restoring “the doctor-patient relationship” by:

Some aspects of this GOP prescription are of Tea Party vintage. Other proposals, like ending legal exemptions for middlemen, are already being pushed by the Trump administration. None of it is as easily packaged as the Medicare for All message being peddled by the 2020 Democratic field.

What is new about the Marcus plan? The depth of research behind it, proponents insist. “This research has literally never been done before, going to the American people like we did,” Elaine Parker, president of Job Creators Network Foundation, told RCP.

All the same, even Parker admits that the chances of House Democrats taking up the proposal is “zero.” Its value instead is in signaling: “We would like to see a bill introduced in the Republican-controlled Senate in 2020 that would provide a clear distinction between what the Democrats are offering in a Medicare for All type scheme or a personalized health care plan.”

Maybe the GOP plan, with all its bullet points, isn’t as easily digestible as #M4A (the Marcus proposal doesn’t have a hashtag at this time). But Parker insists that voters don’t want a “one size fits all plan.” The approach is to create a framework for lawmakers to work from, she said, not another one-and-done top-down scheme.

C.L. Gray, president and founder of Physicians for Reform, echoed that point. He would rather change half-a-dozen features than rewire the inputs of an entire system and hope for an entirely different result. An incremental approach, he insisted, can solve persistent problems, even those identified by Democratic socialist Sen. Bernie Sanders.

Sanders travelled to Canada ahead of the third presidential debate to highlight the skyrocketing cost of insulin in the United States. Gray has diagnosed the same problem.

“I admitted patients to the ICU recently for diabetic ketoacidosis, and when I asked them what happened, they told me they’d stopped taking their insulin,” he said. “One was paying over $600, the other over $900 a month. I’m thinking, ‘I couldn’t even afford that.’”

According to the Health Care Cost Institute, patients pay an average of $450 a month for their insulin. But Gray prescribes a much different solution than Sanders proposes. He estimates that around $300 of that cost goes to middlemen. By targeting current exemptions for those middlemen, “we can cut the average cost of insulin by about 70%,” he says. Reinstate competition into the market, and “we could drop the price to about $40 month.” No democratic socialism required.

But Medicare for All is popular, perhaps because of its apparent simplicity. Polling shows high support for the proposal. All the same, doctors such as Scott Barbour, an orthopedic surgeon in Georgia, dismiss it as “just pure fantasy.”

A more feasible plan, he believes, is the one put together by Marcus and Co. “We have the in-depth solution here,” Barbour said, though he admits “it is just very hard to articulate that to someone over the phone in a short period of time.”

If Republicans run with the plan, they may experience the same explanation problems. For now, though, they remain far from being “the party of health care” — and in need of a messaging remedy that this outline may represent.

Trump Stuffs Democrats Harris And Feinstein On Ninth Circuit Judges
February 2, 2019
Christians Observe Good Friday: Crushed for Our Iniquities
April 19, 2019
De Blasio's Rule For Governing: 'Do As I Say, Not As I Do'
May 17, 2019

Trump Improves Relations With Every Ally (Except Germany)
June 12, 2019

To face a monstrous Republican seeking re-election, Democrats chose a moderate, 'electable' Senate lifer over an insurgent from Vermont. What about this year? Source link Veterans In Defense Of Liberty - Vidol

Mollie Hemingway opines on President Trump defending his decision to withdraw from Syria amid a Turkish offensive. From Wednesday's 'Special Report' on FOX News:MOLLIE HEMINGWAY, THE FEDERALIST: This is really not a debate about Turkey so much as a debate about what foreign policy we will have. In the Republican