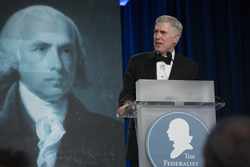 As Democrats’ efforts to oust President Trump from office have played out in the Senate this week, his opponents in the judiciary branch of government maneuvered to curb conservatives’ growing influence on the federal bench.

The ethical advisory arm of the federal judiciary is circulating a draft rule that would ban judges and their clerks from belonging to the Federalist Society, an organization aimed at fostering an originalist interpretation of the Constitution at law schools and through forums and debates across the country.

The proposed rules change is the latest salvo in a campaign to cast the Federalist Society as too political, and thereby politically risky, for judiciary participation. The Wall Street Journal editorial board labeled the proposal “judicial political mischief masked in high sounding rhetoric,” a step that is spurring a backlash among “judges and others” who should denounce it as “undermining legal education in America and perhaps violating the First Amendment right of association.”

Conservative activists put it more bluntly, calling the rules change a transparent attempt to neuter the Federalist Society. The motivation is obvious, these activists say, after the Senate has confirmed a record number of Trump-appointed judges, many of whom are Federalist Society members or have participated in the group’s events.

For better or worse, that success is one of Trump’s most significant legacies, and Republican judicial activists view the proposed change as an insidious attempt to blunt the administration’s momentum in putting conservatives on the bench.

“This rules change was probably instigated and driven by people who are upset with the transformation that is taking place in the federal judiciary, and since they are on the left, they are accustomed to addressing problems by trying to censor the other side,” a longtime Federalist Society member told RealClearPolitics. “And that’s exactly what this is — an act of censorship.”

Carrie Severino, the chief counsel and policy director for the conservative Judicial Crisis Network, said the new rule would create a different standard for judges than they have been held to in the past and severely limit their civic participation.

The proposal was formulated by the Committee on Codes of Conduct of the U.S. Judicial Conference. Reached at his office, Eighth Circuit Court of Appeals Judge Ralph Erickson, who chairs the 15-member committee, declined to comment on how the GOP-controlled Senate will react to such a change.

Lamenting that the drafted change “leaked,” Erickson also played it down as a “proposal open to discussion” during a 120-day comment stage, which will end May 20.

“It’s a branch issue for us,” he said. “The judiciary has a code of conduct it enforces against its own members, and it’s a discussion about what that code should cover. Whatever the people in the [executive] and [legislative] branch think about it — ultimately, they have their own authorities under the Constitution. All our committee is doing is following the process.”

But conservatives believe that his process is deeply flawed – and motivated by partisan politics. Prominent Federalist Society member Ed Whalen, who helped publicize the proposal, wrote in an op-ed that the judicial committee tied itself into a rhetorical knots in trying to explain why the Federalist Society is unduly political but that the liberal American Bar Association is above the fray. Whalen pointed out that the draft language cherry-picked from each organization’s mission statement in ways designed to minimize the ABA’s partisanship and maximize the Federalist Society’s.

Whalen pointed out that the ABA spends significant sums of money lobbying and routinely writes amicus briefs in ongoing litigation, two practices the Federal Society avoids: “In short, the ABA has a consistent and longstanding practice of advocating liberal causes. If a line is to be drawn between the Federalist Society and the ABA, it is the ABA that should be deemed to be on the wrong side of the line.

Apparently anticipating that it would be accused of a double standard, the Committee on Codes of Conduct did propose barring judges and clerks from joining the American Constitution Society, a liberal group created to counter the Federalist Society. Conservatives dismissed this gambit as a false equivalence.

For starters, they argue, the Federalist Society provides a home for conservative thinkers on law school campuses, where the prevailing influences are nearly universally liberal.

“What he objects to is big special interests, including the polluters the [WSJ’s editorial page] serves, using the Federalist Society and related anonymously funded groups to control the nomination and confirmation of Trump judicial nominees,” the spokesman, Richard Davidson, said in a statement. “Americans do not want a network fueled by $250 million of dark money exerting sweeping power over our courts.”

Critics have pointed out that Judge John McConnell, the chief judge of the U.S. District Court for the District of Rhode Island and a major Whitehouse ally, is a member of the Code of Conduct Committee.

Davidson said Whitehouse’s work on the issue has “nothing to do with Judge McConnell or the Codes of Conduct Committee. It’s about a judicial nomination process corrupted with dark money.”

Davidson did not address the dark-money groups on the left, such as Demand Justice, working to oppose conservative judicial appointees and promote liberal nominees.

The ACS did not respond to a request for comment. In an emailed statement, ABA President Judy Perry Martinez said a Code of Conduct Committee advisory opinion found that membership in the ABA isn’t a problem for federal judges because it “recognizes the ABA’s core mission is concerned with the improvement of the law in general and advocacy for the legal profession.”

Martinez did not address how ABA’s spending on federal lobbying and other advocacy efforts on highly charged policy issues does not make it unduly political.

Mike Davis, a former top GOP aide to the Senate Judiciary Committee, predicted a spirited backlash in the Republican-controlled Senate if the draft rules change is approved.

Davis, who now runs a conservative judicial advocacy organization, also took aim at the carve-out for the American Bar Association.

“Wait, it would be unethical for federal judges to belong to a conservative legal group (@FedSoc) — but not a liberal one (@ABAesq)?” he tweeted Wednesday.

The ABA files amicus briefs and adopts resolutions on public policy topics, routinely coming down on the side of liberals. The ABA also has a “government affairs office” that spent $860,000 lobbying the federal government last year alone, according to lobbying records RCP examined.

The lobbying issues the ABA listed on its quarterly reports to the Senate last year included funding for the Office of Refugee Resettlement and provisions “related to unaccompanied immigrant children and families” — a highly charged political issue during the Trump administration.

The ABA’s black-box rating system came under Senate fire last fall amid a fierce wave of criticism about the group’s latest “not qualified” rating for a Trump judicial nominee, Lawrence VanDyke, appointed to the Ninth Circuit U.S. Court of Appeals. The ABA rating included highly personal attacks on his character and work ethic.

Conservatives groups denounced the assessment, labeling it a “drive-by shooting” motivated more by VanDyke’s conservative leanings and expected opinions on abortion-related and environmental cases than any job performance or true character issues.

News then broke that the lead evaluator for the “not qualified” rating, Montana trial attorney Marcia Davenport, made a political donation to a judge during a 2014 campaign in which VanDyke was challenging him for a Montana Supreme Court seat.

In response, Sen. Mike Lee called on the Senate and the White House to “suspend the unique aspect the American Bar Association has, until such time a thorough investigation and review is undertaken into how these functions are performed. … The ABA has lost its credibility as a neutral arbiter and should be treated no differently than any other special interest group, which it is.”

Share This Post
Like it? Vote it up!
00
Previous ArticleEnd Times: One Reason Evangelicals Love TrumpNext Article70% of Americans Want Significant Abortion Restrictions
You May Also Like
Disaster! America Created Just 20,000 Jobs in February
March 8, 2019

'Joker' Movie Is an Indictment of Moral Relativism
October 9, 2019

Leftwing Media Goes After Lara Logan For Telling The Truth About Leftwing Media Bias
February 19, 2019
Why Are Dems Still Foot-Dragging on Impeachment?
May 27, 2019

While the 2020 Democratics endlessly strive to out-progressive each other on abortion, a new poll reveals bipartisan support for abortion restrictions. Source link Veterans In Defense Of Liberty - Vidol

The enemies of Israel have unleashed a massive air attack on the Promised Land. Hundreds of fighter jets streak across the sky. But before Israel can be destroyed, fire rains from the heavens and the enemy jets explode in mid-air with no explanation. Hailstones the size of golf balls follow the