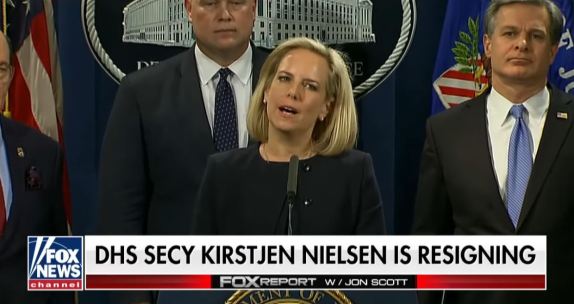 President Trump announced, just after a 5:00 p.m. Sunday White House meeting with Nielsen, that she was leaving, and that Customs and Border Protection Commissioner Kevin McAleenan will serve as acting DHS secretary.

The establishment media was quick to claim that Nielsen’s departure was engineered by Stephen Miller, Senior Advisor to President Trump and bête noire of the Left on all things related to immigration and border security.

It’s unclear whether Nielsen is deciding to leave voluntarily, or whether she has been pressured to resign. However, from our perspective Kirstjen Nielsen’s departure has been a long time coming and is well overdue.

Administration sources told Fox News Sunday evening that Nielsen’s background in cybersecurity made her a poor fit to handle border issues, while McAleenan best fits Trump’s requirement of being the “toughest cop” on the frontier.

According to reporting by Samuel Chamberlain of Fox News, Nielsen was viewed as resistant to some of the harshest immigration, and from our perspective much needed, measures supported by the president, such as zero-tolerance and ending protected status for some refugees. Once her old boss General John Kelly left the White House at the end of last year, Nielsen’s days appeared to be numbered. She had expected to be pushed out last November, but her exit never materialized.

Though President Trump took Gen. Kelly’s recommendation and chose Nielsen for the job, according to reporting by Molly O’Toole and Chris Megerian of the Los Angeles Times, the President reportedly viewed her with suspicion because she had served as a special assistant to President George W. Bush, marking her as a member of the Republican establishment that Trump has criticized and battled.

President Trump was right to be skeptical of Nielsen.

So, by rights they should be centerpieces of President Donald Trump’s successful administration.

Except the people whom the President’s Office of Personnel and senior staff keep sending him to implement his campaign promises often give every evidence of being diametrically opposed to those policies.

Kirstjen Nielsen was a perfect example of that problem, which is why we were skeptical of her nomination in the first place.

As a Jeb Bush donor and former special assistant to President George W. Bush, Ms. Nielsen’s primary qualification for the job of Secretary of Homeland Security was not a background in conservative homeland security policy or conservative national security policy – it was serving as former White House Chief of Staff Gen. John Kelly’s Chief of Staff.

That doesn’t mean Nielsen knew nothing about homeland security; it does, however, mean that much of what she thought she knew is wrong and at odds with the policies of her ostensible Boss – President Donald J. Trump.

Our entire immigration system has essentially become a refugee and amnesty program. After voting for Donald Trump to “drain the swamp” on illegal immigration and open borders the President has been stymied because he keeps appointing people who refuse to uphold the letter and spirit of our immigration laws and put America’s sovereignty first.

Mr. Chamberlain of Fox News reports that it remains to be seen whether McAleenan can handle the political duties required to be permanent homeland security secretary, though they noted that he has excellent relationships with the Pentagon, State Department, and National Security Council. McAleenan also has a reputation within CBP as a “brilliant” mind with “tremendous organizational skills.”

Maybe so, but similar things were said about Gen. Kelly, Kirstjen Nielsen and others who have been appointed to senior administration posts and failed to produce on the Trump agenda. Now that Kirstjen Nielsen is out we hope the President will finally grasp that personnel is policy and address it by appointing senior officials who actually believe in and want to accomplish his agenda, starting with the Department of Homeland Security and the Immigration and Customs Enforcement agency.

Share This Post
Like it? Vote it up!
00
Previous ArticleAssault on America, Day 96: Which side of the border crisis are Democrats and the media on?Next ArticleDespite Election Gains, Blacks Fleeing Chicago in Droves
You May Also Like
UK PM May Hails Trump for Strengthening NATO Alliance
June 4, 2019
Storms Leave Nebraska With ‘Largest Widespread Amount of Flooding’ in the Last 50 Years
March 18, 2019

While hardly anyone was paying attention, black women rose up and took charge of the most high-profile positions in our city and county government. If you throw in the African-American men also in top spots, the changing political tide is even more astounding.Read Full Article » Source link Veterans In Defense

Assault on America, Day 96: Which side of the border crisis are Democrats and the media on?