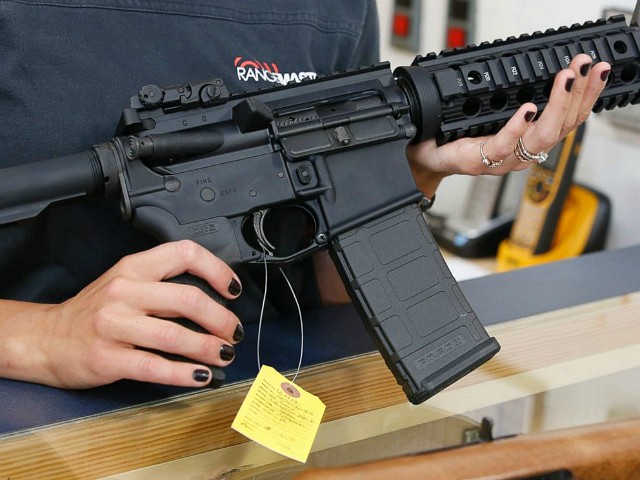 A judge in the U.S. District Court for the Southern District of California issued a ruling Friday that noted F-150 pickups are popular, but AR-15s are twice as popular.

In the ruling, Benitez used the moniker “modern rifles” to describe AR-15s and other firearms the left labels as “assault weapons.”

He then noted, “Modern rifles are popular. Modern rifles are legal to build, buy, and own under federal law and the laws of 45 states. There are probably more modern rifles in circulation than there are Ford F-150 pickup trucks.”

Benitez added, “In 2018, 909,330 Ford F-150s were sold. Twice as many modern rifles were sold the same year. Imagine, every time one passes a new Ford pickup truck, it is a reminder that two new modern rifles have been purchased. That is a lot of modern rifles owned by Americans.”

Later in the ruling, Benitez observed:

After handguns, modern rifles are probably the most popular firearms in America. They are quietly owned by millions of law-abiding citizens for lawful purposes ranging from home defense to sporting competitions. Yet, California has banned, and continues to ban, these popular rifles. Perhaps the State has a long-range plan of taking incremental steps toward more and more gun control. But it should be obvious that barring total extinction of the Second Amendment, no amount of “common sense” gun control laws will prevent criminals from misusing guns.

The case is Miller v. Bonta, No. 19-cv-1537, in the U.S. District Court for the Southern District of California.

AWR Hawkins is an award-winning Second Amendment columnist for Breitbart News and the writer/curator of Down Range with AWR Hawkins, a weekly newsletter focused on all things Second Amendment, also for Breitbart News. He is the political analyst for Armed American Radio. Follow him on Twitter: @AWRHawkins. Reach him at awrhawkins@breitbart.com. You can sign up to get Down Range at breitbart.com/downrange.

Share This Post
Like it? Vote it up!
00
Previous Article‘I Don’t Think Dr. Fauci Needs to Be Commenting’ on Virus Origins, He’s at Least Perceived as Having a ConflictNext ArticleIt must be nice…
You May Also Like
NY Times Modifies Its Motto to Fit Leftist Agenda
August 12, 2019

GM Workers Strike to Get Back What the Recession Stole
September 19, 2019

Dems Lose the American Middle in Wake of Border Crisis
July 20, 2019
Howard Schultz: Dems Are 'Out of Touch,' 'Policies Are Not Realistic'
April 2, 2019

It must be nice... View Reddit by undue-influence - View Source

'I Don't Think Dr. Fauci Needs to Be Commenting' on Virus Origins, He's at Least Perceived as Having a Conflict

During an interview released on Friday’s “Fox News Rundown” podcast, former HHS Assistant Secretary Adm. Brett Giroir said that White House Chief Medical Adviser Dr. Anthony Fauci doesn’t need to be commenting on the origins of COVID-19, and “should be careful in being the public face or the W.H.O. representative on