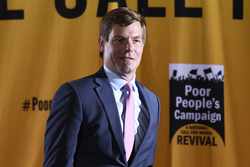 It turned out to be an unfortunate comparison.

“We are all a part of the Avengers,” Rep. Eric Swalwell told voters in Iowa last month, likening himself and the rest of the Democrats running for president to those comic book superheroes who sacrifice everything to save the universe.

The California lawmaker failed to mention how half those heroes end up disintegrating and disappearing into thin air during their final battle. And now, metaphorically speaking, Swalwell has done just that.

“Today ends our presidential campaign, but it is the beginning of an opportunity in Congress,” Swalwell said at a press conference in his home state. A candidate for just 90 days, he told reporters that his team had “to be honest about our campaign’s viability.”

Swalwell is the first to drop out of the large Democratic field. He will instead return to his congressional district to defend his House seat from a primary challenge.

The Democratic National Committee had worried about overcrowding with 25 candidates running for the Oval Office. But the departure of Swalwell shows that the DNC’s plan seems to be working, more evidence of what a senior party official described to RealClearPolitics in April as a “winnowing before we get to Iowa.”

To narrow the field, the committee set strict qualifications for its televised debates. To get on stage during the June and July debates, a candidate had to either garner at least 1% support in three separate polls or receive 65,000 contributions from individual campaign donors. Swalwell made the cut for the first debate in Miami. Then the DNC doubled the requirements for upcoming contests.

It was unlikely that Swalwell would have qualified for another debate. His campaign had hoped that his Miami performance would be a break-out moment. It wasn’t. Swalwell spoke for just 4 minutes 43 seconds, less airtime than even self-help guru Marianne Williamson was afforded. When not interrupting other candidates, Swalwell spent his time attacking South Bend, Ind., Mayor Pete Buttigieg over local policing and making oblique references to Joe Biden’s age.

The former vice president later accused Swalwell of “ageism.” Other than shooting an icy stare across the stage, Buttigieg didn’t even bother with a rebuttal. Ten days later, Swalwell was the first casualty of 2020.

Montana Gov. Steve Bullock is likely to take his place in Detroit later this month. Bullock declared two months after Swalwell, and, according to a FiveThirtyEight analysis, had inched his way into the 20th and final spot onstage at the second presidential debate July 30-31.

Other lesser-known candidates will now pick among the remains of the Swalwell campaign for support as they try to claw their way out of the polling basement. They won’t find much. A Washington Post/ABC News poll found the four-term congressman polling at exactly 0% after the first debate.

Former Maryland Rep. John Delaney didn’t register in that polling either, but a spokesman told RCP he wasn’t surprised to see the competitor call it quits. “Rep. Swalwell never really found his footing,” the spokesman said before adding that “the people of California will be well served to have him back in Congress. We wish him the best in his re-election bid.”

There, Swalwell will have to fend off Aisha Wahab. The Hayward City Council member, who is one of the first Afghan-American elected officials in the U.S., declared her candidacy earlier in the spring and is already drawing comparisons to New York Rep. Alexandria Ocasio-Cortez.

In the presidential race, Swalwell failed to rally voters with his call for stricter gun control. Competitors such as Sen. Elizabeth Warren made similar arguments and actually managed to make headway in the polls.

And while the Swalwell exit isn’t likely to shake up the field, his departure may make the contest less interesting: The Golden State lawmaker was not immune to gaffes.

When a gun owner tweeted that Swalwell “wants a war” over the Second Amendment, the lawmaker seemed to suggest using nuclear weapons against rebelling citizens. “The government has nukes,” he responded. “Too many of them but they’re legit.” Swalwell later insisted he was only kidding but not until after he had been lampooned by conservatives.

Other statements were less easily explained away, such as the time the candidate said that, unlike Biden, he would “actually have to live with the decisions that I make” as president, or the time that Swalwell, a white male, told Vice News that he was running to increase diversity.

He now joins the ranks of presidential also-rans, the first of the 2020 crowd to call it quits and, in his telling, the first failed Avenger.

Share This Post
Like it? Vote it up!
00
Previous ArticleMueller Report Undercuts Its Own Core Russia-Meddling ClaimsNext ArticleDemocrat Congresswoman Will Not Return Campaign Contributions from Epstein
You May Also Like
Amazon Thanks GOP/Dems for Passing Green Card Giveaway for Big Tech
July 11, 2019
Navy Investigating After Sailor Found Dead Aboard Carrier
November 29, 2017
Joe Biden Drew Only 30 Supporters in NH During Trump Rally
August 17, 2019
Clapper: If Active Collusion Wasn’t Proven, I Think We Have ‘A Case of Passive Collusion’
April 19, 2019
Ramadan Rage 2019: Jihadis Massacre 364, Injure 404 in Two Weeks
May 21, 2019
Nobody Knows Anything About 'Electability'
March 22, 2019

Democrat Congresswoman Will Not Return Campaign Contributions from Epstein

Stacey Plaskett, the delegate to the U.S House of Representatives from the Virgin Islands, is unlikely to return the thousands of dollars donated to her campaign by Jeffrey Epstein, a billionaire sex offender recently arrested for child sex trafficking.  Source link Veterans In Defense Of Liberty - Vidol

By Aaron Mate, RealClearInvestigationsJuly 5, 2019Amazon.comAt a May press conference capping his tenure as special counsel, Robert Mueller emphasized what he called Source link Veterans In Defense Of Liberty - Vidol