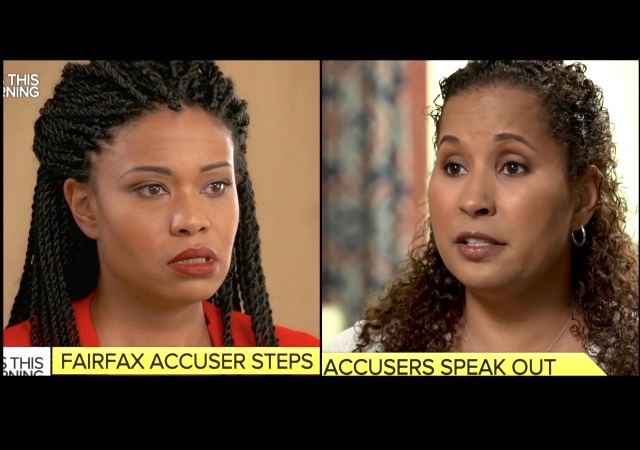 Vanessa Tyson and Meredith Watson, the two women who have accused Democrat Virginia Lt. Gov. Justin Fairfax of sexual assault and rape, sat down with Gayle King for CBS This Morning to provide details of the incidents.

Tyson demanded an investigation from the Virginia legislature while Watson reminded people that she has nothing to gain by coming forward.

Tyson alleges that Fairfax sexually assaulted her in 2004 at the Democrat National Convention in Boston:

Tyson said she met Justin Fairfax at the Democratic convention in Boston in 2004 when he was a law student. She said he asked her to accompany him to his hotel room.

“He just needed to pick up some paperwork is what he said,” she said.

“He kisses me,” Tyson said.

“And you’re OK with the kissing,” King asked.

But suddenly, she said, he became violent, forcing her to perform oral sex.

“He’s using his hand on the back of my neck. I couldn’t say anything cause I’m choking and gagging,” she said.

Tyson also claimed that Fairfax took advantage of her since she is a survivor “of incest.” From The Washington Post:

Tyson said she avoided Fairfax after the incident and rebuffed his attempts to contact her. Fairfax disputes this and has said Tyson reached out to him at a later date, saying she wanted him to meet her mother in New York.

Tyson said she did not tell anyone about the assault until recently.

“I was so ashamed,” Tyson said. “I was so humiliated on so many levels. I was this woman working at a rape crisis center, trying to, as a survivor speaker, trying to empower survivors of sexual assault. And it was like I had just walked into a trap.”

She came forward after racist pictures of Democrat Gov. Ralph Northam came to light because she feared Faifax coming to power if Northam resigned. Tyson told King that Virginia voters “have a right to know.”

She expressed disgust at the fact that these allegations have been swept away. Her lawyers have already stated that she is willing to meet with the Suffolk County district attorney in Boston.

Tyson blasted Fairfax’s statements where he likened himself to lynching victims. From The Richmond Times-Dispatch:

Tyson also pushed back on Fairfax’s likening of the accusations against him to the lynching of African Americans. Fairfax said in a February speech on the Senate floor that “the truth is on my side” and cautioned against “political lynchings without any due process.”

“Never was it two black women lynching black men,” Tyson said. “One need only look at history to try to understand that, in fact, the role of black women had always been leading anti-lynching campaigns. You know, black women were lynched specifically trying to protect black men. And speaking as someone who teaches black politics, I find it disgraceful, irresponsible and manipulative.”

Watson met Fairfax during their freshmen year at Duke University. They remained friends, which is why she didn’t think anything would happen when he invited her over in 2000 during their junior year.

Her story sort of mirrors Tysons as she also believes Fairfax took advantage of her as a survivor of sexual assault:

“He knew that the year prior that I had been raped by someone and that nothing was done about it. And he was a very good friend to me,” Meredith Watson told King. “Which is why I never would’ve expected anything like this from him.”

Watson claims Fairfax assaulted and raped her in 2000, when they were both students at Duke University. She said the two were friends and that she had confided in him about being allegedly assaulted by a Duke basketball player the year before.

“Did you ever talk to him [Fairfax] after he allegedly assaulted you, did you ever say, ‘How could you do that to me, you were my friend?’” King asked.

“I did. One night after it happened … I was at a party on campus and he came and so I went to leave, like, I left. And he followed me out and was sort of following after me, calling after me,” Watson said. “And I was just running trying to get away and then I finally stopped and I turned around. And all I said to him was, ‘Why? Why would you do that to me.’ And he said, ‘I knew because of what happened to you last year that if I got you in the right situation, you would be too afraid to say or do anything about it.’”

“Meredith, you hear that and you think what?” King asked.

“He knew what he was gonna do that night when he asked me to come over,” Watson said.

Watson told King that the night started normal until he left the room and came back. His demeanor changed and he stood in the front of the door as if he met to block it:

“Oh no, what’s about to happen,” she said. “And he did things that you shouldn’t do to someone without their permission. And I tried several times to get up and leave and was pushed back down.”

“He forcibly sexually assaulted and raped me,” Watson said. “I was not on the bed, initially. There was a couch. And he pulled me over and I tried several times to get up and was pushed back down, held down.”

“It was very clear,” she said.

Fairfax has said the night in question was consensual. To that, Watson said, “If you have to hold someone down, it’s not consensual.”

Afterward, Watson said there wasn’t any conversation. She “just wanted to get to a safe space.”

“I just left. It was humiliating,” she said. “And so I left and I told my two closest friends.”

“I believe I told them that something really awful had happened and that I had been raped. And I think I said that I was so humiliated I didn’t want to talk about it anymore,” she said.

Since Tyson came forward, Watson has felt guilty for not coming forward sooner. Through tears, she told King that if she “had the strength or the courage to say something in 2000, maybe it never would have happened to her.”

Watson said that people shouldn’t use her past against her or a way to discredit her allegations. She stressed that she doesn’t “have anything to gain by coming forward.” Instead, by speaking the truth, it has only brought her “criticism and chaos and scrutiny of me and put me under a microscope.” Despite this she knew she had to tell the truth.

Like Tyson, Watson “wants action from the Virginia legislature.” She is not demanding money and only wants Virginians to know the truth.

Share This Post
Like it? Vote it up!
00
Previous ArticleThe Strange Aftermath of Virginia's Political ScandalsNext ArticleSeeing the Truth About Abortion Will Change People's Minds
You May Also Like
Tulsi Gabbard: Voters Should Remove Trump from Office — Not Impeachment
April 22, 2019
Donald Trump Celebrates Golfing Buddy Tiger Woods' Unlikely Masters Victory
April 14, 2019
In South Carolina, Harris and Biden in Black and White
July 11, 2019
Democrats Are Clueless When It Comes to China Policy
May 18, 2019

Seeing the Truth About Abortion Will Change People's Minds

Seeing the truth about abortion will change people's minds on the procedure and society's view of this heinous human-rights abuse. Source link

Despite broad calls for the resignations of Virginia's governor, lieutenant governor and attorney general, they remain in office as the state tries to muddle on. Source link