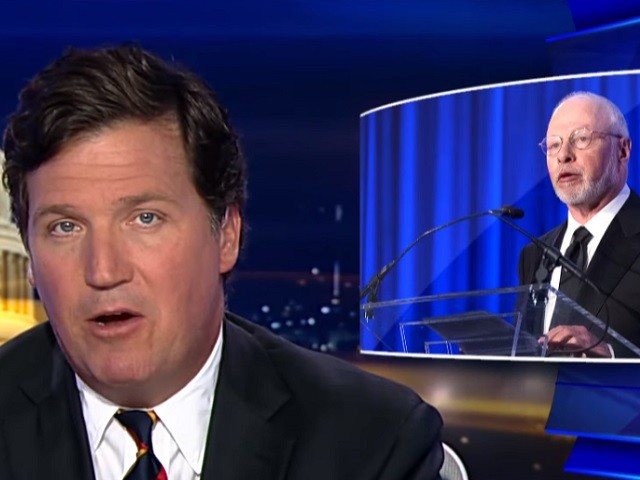 Carlson reminded viewers of the circumstances throughout the country in an age where the industrial sector thrived but now barely resembles that era.

What has led to that, according to the Fox News host, is, in part, Singer’s practice of purchasing distressed companies, remaking them in a way that includes outsourcing the labor and selling them at a profit but at the expense of a company’s original employees.

“[T]he model is ruthless economic efficiency: Buy a distressed company, outsource the jobs, liquidate the valuable assets, fire middle management, and once the smoke has cleared, dump what remains to the highest bidder, often in Asia,” Carlson explained. “It has happened around the country. It has made a small number of people phenomenally rich. One of them is a New York-based hedge fund manager called Paul Singer, who, according to Forbes, has amassed a personal fortune of more than $3 billion.”

“During the last financial crisis, a consortium of hedge funds, including Singer’s Elliott Management, purchased Delphi,” he said. “With Singer and the other funds at the helm, the company took billions of dollars in government bailouts. Obama’s auto-czar compared the tactics to extortion. Once they had the bailout money, the funds moved most of Delphi’s jobs overseas, and then either cut retiree pensions entirely or shifted the costs to taxpayers.”

“With lighter financial commitments at home and cheap factories abroad, Delphi’s stock soared,” he continued. “According to investigative reporter Greg Palast, of the 29 Delphi plants in operation when the hedge funds started buying Delphi debt, only four were still operating in the United States by 2012. Tens of thousands of unionized and white-collar workers lost their jobs. Paul Singer’s hedge fund cashed out for more than a billion dollars.”

Another example that Carlson highlighted was Singer’s involvement with outdoors retailer Cabela’s and how Singer’s practices decimated the town of Sidney, NE.

“In October 2015, Singer’s hedge fund disclosed an 11% stake in Cabela’s and set about pushing the board to sell the company,” he said.  “Cabela’s management, fearing a long and costly fight with Singer, announced it would look for a buyer. At the time, Cabela’s was healthy. The company was posting nearly $2 billion a year in gross profits, off $4 billion in revenue. There was no immediate need to sell. But they did anyway. One year after Singer entered the equation, Bass Pro Shops announced the purchase of Cabela’s. The company’s stock price surged. Within a week, Singer cashed out. He’d bought the stock for $38 a share. He sold it for $63. His hedge fund made at least $90 million upfront, and likely more over time.”

But in Sidney, Nebraska, it was a very different story,” Carlson continued. “The residents of Sidney didn’t get rich. Just the opposite. Their community was destroyed. The town lost nearly 2,000 jobs. A heartbreakingly familiar cascade began: people left, property values collapsed, and then people couldn’t leave. They were trapped there. One of the last thriving small towns in America went under. We recently sent two producers to Sidney, to survey the wreckage and consider what happened. Our producers talked to more than a dozen former Cabela’s employees. Almost all of them refused to speak on camera, fearful of legal retribution from the famously vicious Paul Singer.”

Battle for GOP Starts in Georgia

Georgia's Trump-backed Republican governor is defying the president with his Senate appointment. Will his gambit pay off? Source link Veterans In Defense Of Liberty - Vidol

The House Intelligence Committee report released by chairman Rep. Adam Schiff (D-CA) on Tuesday cites no constitutionally permissible grounds for impeachment against President Donald Trump — other than tweets. Article II, Section 4 of the U.S. Constitution provides that impeachment shall be for “Treason, Bribery, or other high Crimes and Misdemeanors.”