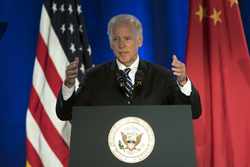 Once upon a time, May 1 — May Day — was a day for working-class parades in factory towns. This year, it was a day for Joe Biden, to set off on his third presidential campaign in 32 years, to make news on the stump, not in a working-class venue but in the university town of Iowa City, now the state’s Democratic stronghold.

Biden’s claims for the presidency rest heavily on foreign policy expertise gained in eight years as vice president and 34 years on the Senate Foreign Relations Committee. And, unusually for a Democratic candidate this cycle, he chose to speak about China. “China is going to eat our lunch? Come on, man,” he orated. “They can’t even figure out how to deal with the fact that they have this great division between the China Sea and the mountains in the … west. They can’t figure out how they’re going to deal with the corruption that exists within the system. … They’re not bad folks, folks, but guess what. They’re not competition for us.”

“This will not age well,” tweeted Sen. Mitt Romney, who surely remembers how then-President Barack Obama ridiculed him in the final 2012 presidential debate for bringing back the foreign policy of the 1980s by characterizing Russia as our “number one geopolitical foe.”

It turns out Romney had a point then, and he has one now. Biden’s foreign policy views seem stuck in the 1990s. Those were optimistic times, with the Cold War won and no geopolitical foe in sight, with a surging U.S. economy complete with budget surpluses. It was “the end of history,” in scholar Francis Fukuyama’s phrase, when it seemed that something like the American-style democracy, human rights and dynamic capitalism would sweep the globe.

Including China. The mechanism to make it so was to bring China into the world trade system, a proposal supported by the Clinton administration, George W. Bush and most congressional Republicans. In 2000, permanent, normal trade relations with China passed the House 237-197 in May and the Senate 83-15 in September. Opposition came largely from labor Democrats and members like Reps. Chris Smith, Frank Wolf and Nancy Pelosi concerned about China’s human rights abuses.

The widespread assumptions were that the international trade framework would lead China to respect international norms, and encourage the Chinese people to demand — and the Chinese government to advance — democracy and human rights. Increased trade, it was hoped, would produce economic growth here, as opening trade with Japan and Mexico had seemingly done.

China has consistently cheated on trade rules and intellectual property rights. And while increased trade with China has contributed to American economic growth, it has also cost far more American jobs than respected experts predicted.

Chinese imports as a percentage of U.S. economic output doubled within four years, Massachusetts Institute of Technology economist David Autor reported in 2016. “We would conservatively estimate that more than a million manufacturing jobs in the U.S. were directly eliminated between 2000 and 2007 as a result of China’s accelerating trade penetration in the United States,” in markets ranging from clothing to jewelry, toys to furniture, he wrote.

Hopes for democratization and human rights have also been dashed. When Congress voted on China trade, Russia had been holding free elections, and Vladimir Putin was serving his first year as president. Now his reign is scheduled to extend to the 2020s, and maybe beyond. China has become ever bolder in its suppression of human rights and any demand for anything like free elections. Chinese President Xi Jinping has even discarded the term limits imposed on his predecessors.

With economic growth slowing down, China’s leaders are evidently relying on expansionist nationalism to rally popular support. They have built and fortified islands in the South China Sea to claim sovereignty over its sea lanes and have expanded their capacity to nullify U.S. weapons systems. As former Trump Pentagon aide Elbridge Colby writes in Foreign Policy, “If the United States delays implementing a new approach, it risks losing a war to China or Russia — or backing down in a crisis because it fears it would.”

The hopes for a cooperative and peaceful China have unfortunately been dashed. But for Joe Biden, it’s evidently still the 1990s. Is this the best the Democrats can do?

Michael Barone is senior political analyst for  the Washington Examiner, resident fellow at American Enterprise Institute and longtime co-author of The Almanac of American Politics.

Share This Post
Like it? Vote it up!
00
Previous ArticleIf You Work for Trump, Expect to Be ‘Thrown Under Bus’Next ArticleBiden Stuck in Past When It Comes to Climate Change
You May Also Like
Police: Arsonist Set Pro-Life Poster on Fire at Western Washington University
May 7, 2019
Conspiracy Theorists Won't Believe 'Official' Epstein Story
August 12, 2019
Jackie Speier: Trump 'Has in Many Respects Become a Dictator'
May 8, 2019

Only One Roadblock on the Road to Reform: Mitch McConnell
March 9, 2019

Maher: Democrats Just Have to Be ‘Less Crazy Than Trump,’ and ‘They’re Blowing It’
August 3, 2019
Talented Women Will Help Republicans Retake the House
May 17, 2019

Biden Stuck in Past When It Comes to Climate Change

Biden thinks fracked gas is an acceptable way to reduce emissions. He is too stuck in the past to be a credible standard-bearer for the Democratic party Source link Veterans In Defense Of Liberty - Vidol

If You Work for Trump, Expect to Be 'Thrown Under Bus'

Boohoo, writes Jill Filipovic. It's hard to be moved by Stephanie Winston Wolkoff's objection to suggestions that she profited excessively from the Trump inaugural and was forced out of her job as a result. She voluntarily worked for a notoriously disloyal and self-dealing family, and turned a blind eye for