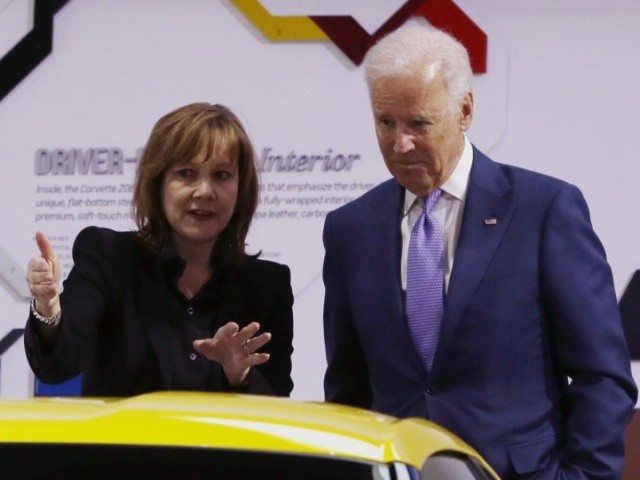 General Motors (GM) CEO Mary Barra took a less than half a percent pay cut last year despite implementing a plan to lay off thousands of American workers, including closing four manufacturing plants in the United States.

Barra, a close ally of the Obama administration and Democrat presidential candidate Joe Biden, closed the Lordstown, Ohio plant last month, a decision expected to result in the layoff of more than 8,000 American workers in the area, and allegedly blamed the United Auto Workers (UAW) for the plant’s closure.

Negotiations between GM and the UAW detail how union workers were willing to accept nearly $120 million a year in concessions to keep the Lordstown plant open. Barra, though, moved forward with the plan to close the facility.

After Barra closes Detroit-Hamtramck and Warren Transmission in Michigan, Lordstown Assembly in Ohio, and Baltimore Operations in Maryland, she is expected to have laid off about 14,700 of GM’s workers in the U.S. and Canada.

Despite the mass layoffs in North America, Barra continued to earn nearly $22 million — cutting her pay by only $87,598 according to GM’s filings. This means that while thousands in the U.S. are laid off, Barra took only a 0.4 percent pay cut.

While Americans are laid off en masse at GM, the corporation’s production in Mexico remains unaffected by any job reductions and has even announced additional production in China.

Years after the bailout, Biden and officials with the Obama administration not only touted Barra’s leadership at GM but invited her to the State of the Union Address in 2014 and took photo-ops with the executive.

In 2011, Hoover Institution at Stanford University research fellow Paul Gregory noted that despite the Obama-Biden bailout for GM, the company continued outsourcing American jobs abroad. A 2011 report detailed GM had less than 75,000 jobs left in the U.S. while employing more than 122,000 foreign workers overseas. At the time, nearly two-thirds of GM’s workforce was located abroad.

Rather than stopping GM’s outsourcing, the Obama-Biden scheme focused much of their attention on subsidizing and promoting electric, plug-in cars like the Chevy Volt. Last year, Barra announced that production for the Volt, as well as the Chevy Cruze, would end.

Experts have called on Trump to implement a 25 percent auto tariff to protect American auto worker jobs and the U.S. auto industry from Chinese domination. Likewise, Sen. Bernie Sanders (I-VT), vying for the Democrat nomination for president, has told Trump to immediately ban GM from receiving federal contracts for their outsourcing, offshoring, and mass layoff scheme.

GM is looking to manufacture an electric Cadillac in China and continue manufacturing its Envision compact vehicle in China. The made-in-Mexico Chevrolet Blazer will soon arrive in U.S. markets. Last year, GM became the largest automaker in Mexico as it has cut jobs in America and increased production in Mexico.

It wasn’t an accident that Joe Biden traveled to Pittsburgh for a speech this past week. The city that birthed a precursor to the United Steelworkers was riveted together, appropriately enough, by unions. Its bridges and railways and skyscrapers were built from union-smelted steel. The political machinery, which has churned out

The Hope Center for College, Community, and Justice surveyed college students to determine how many of them face hunger and "food insecurity." Source link Veterans In Defense Of Liberty - Vidol