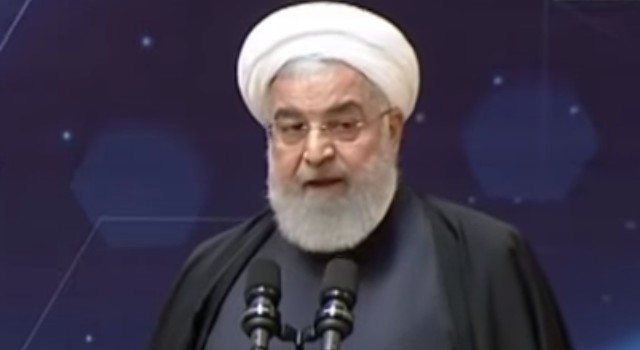 In light of findings that Iran may be in violation of nuclear deal, Iran announces new more advanced centrifuges

Rouhani, according to the report, which was based on a translation by the Middle East Media Research Institute (MEMRI), not only announced the installation of 20 IR-6 centrifuges but seemingly threatened, “If yesterday you feared our IR-1 centrifuges—well, here you go!” He also boasted that during the past year “we have acquired missiles and weapons that you could not have imagined.”

An IR-6 centrifuge is more advanced than an IR-1, which are currently installed, so it can enrich uranium faster. Iran is allowed a limited number of these advanced centrifuges during the first eight and a half years of the nuclear deal. However, the faster Iran can enrich uranium, the faster it can create sufficient fissile material for a nuclear weapon, thus reducing its breakout time even further.

Nonetheless, the belligerent nature of the announcement is disturbing, coming, as it does, after studies of the nuclear archive Israel recovered last year that indicated Iran’s nuclear weapons program is more advanced than previously thought.

“There is considerable information in the archive that shows that Iran deceived the IAEA and the international community about its nuclear weapons activities throughout the 2000s and provided incomplete and misleading declarations,” a paper co-authored by David Albright and Andrea Stricker of the Institute for Science and International Security, and Olli Heinonen of the Foundation for Defense of Democracies asserted in February. “There are actually ‘deception folders’ in the archive that catalogue Iran’s lies to inspectors, to enable it to be consistent from meeting to meeting.”

The contents of the archive, according to the paper, show that “Iran will be well positioned to make nuclear weapons at a time of its choosing once the nuclear deal limitations end, and could also make them much more quickly than the world previously assessed.”

Despite President Obama’s promises that the deal would ensure that Iran would never acquire nuclear weapons, the terms of the agreement only delayed Iran’s ability to develop a nuclear weapon. Iran’s continued advances and the International Atomic Energy Agency’s ineffectiveness in overseeing all aspects of Iran’s nuclear program mean that once the deal expires, Iran could reach their goal even faster.

In addition to boasting about the new IR-6 centrifuges, Rouhani promised that Iran would soon have even more advanced IR-8 centrifuges enriching uranium, saying, “If you persevere in your injustice and wrongdoing, you will also see a chain of IR-8 centrifuges in the not-so-distant future. You cannot prevent the scientific progress of the Iranian people. If the purpose of your sanctions was to diminish Iran’s military power, know that in the past year—as you are fully aware—we have acquired missiles and weapons that you could not have imagined.”

The boastful belligerence from Rouhani, who is often called a “moderate,” accompanying the announced advances in Iran’s ability to enrich uranium, raise real questions as to how “peaceful,” the Islamic Republic’s nuclear program is.

Scot Peterson Will Always Be Haunted by His Failure
June 11, 2019

One victim’s brother: “Unfortunately now our governor has decided to interpose his own personal opinion regarding the death penalty.” California Governor Gavin Newsom took his pen in hand and signed an order putting an executive moratorium on the death penalty in the state. Undeterred, prosecutors in the Golden State Serial Killer case

Brooks: Trump's Sanctuary City Proposal 'Treating It All as a Twitter Game'

On Friday’s “PBS NewsHour,” New York Times columnist David Brooks reacted to President Trump suggesting releasing migrants into sanctuary cities by stating Trump is “treating it all as a Twitter game to make his base feel good about themselves.” Brooks said, “Well, he’s Source link Veterans In Defense Of Liberty - Vidol