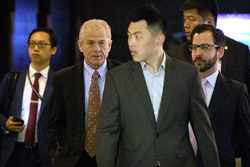 President Trump has been tougher on China than any other U.S. president. His tough negotiating has even received praise from Thomas Freidman at the New York Times. This is in part due to Trump selecting top advisers such as Peter Navarro, Robert Lighthizer, and Wilbur Ross – all of whom have extensive experience in U.S.-China relations. However, one area of discussion should be closing the China profit-sharing loophole. This loophole is often exploited by Chinese financial interests and supported by politicians eager to tout short-term assembly-line job creation – even if that means lining the pockets of Chinese investors.

Buy America provisions were enacted to direct federal funding to American manufacturers supporting projects involving highways, public transit, and aviation. Some states have passed similar laws to mirror these provisions. However, Chinese companies have found a loophole to expose this pro-America jobs initiative, and have turned it into a pro-China program.

Take for example, Zhejiang Geely Holding Group, a Chinese automotive company headquartered in Hangzhou, China. Geely is run by billionaire Li Shufu. His company has recently been on an acquisition spree, buying up numerous automotive and heavy-duty truck manufacturers from across the globe.  Geely’s financial portfolio includes iconic American brands like Mack – a truck manufacturer originally from Allentown, Pa. It is also the largest shareholder in Volvo Trucks – a historically Swedish company. Together, Geely now has a stake in a quarter of the world’s largest heavy-duty truck manufacturers.

In addition, these brands under Geely’s umbrella are very much eligible for Buy American opportunities at the federal and state level. This is because the U.S. only requires that 60% of the cost of all components in rolling stock be made in the U.S., and that final assembly occur in the U.S. — meaning, Geely can manufacture important and technical truck parts and components in China and ship those parts to America for final assembly. This type of manufacturing is not disqualified from Buy America opportunities and such a loophole allows China to profit at a wide margin.  A recent Senate report found that 13 federal agencies used Buy America loopholes to spend more than $92 billion on foreign contracts between 2008 and 2016.

More should be done to see that Chinese moguls like Geely and others are not enriched by American taxpayer dollars. These Buy America opportunities should only be awarded to U.S. companies and should not financially benefit Chinese-backed ones. This loophole has been exploited by China and it is past time to restore the Buy American provisions for American companies.

As President Trump’s director of trade and manufacturing, Peter Navarro (pictured), said best in his documentary “Death by China”: “That money goes over to help finance … the fastest military buildup of a totalitarian regime since the 1930s.” This couldn’t be more apparent when you look at how China is profiting off of American projects that should be awarded to American-owned companies. It is time to close this loophole.

Share This Post
Like it? Vote it up!
00
Previous ArticleHow the Elitists Lost BritainNext ArticleWhy McConnell Outmaneuvers Dems on Supreme Court
You May Also Like
Trump to Nominate Acting Defense Secretary Patrick Shanahan to Permanent Position
May 9, 2019
‘Poor Kids Are Just as Bright and Just as Talented as White Kids’
August 9, 2019
Coast Guard Veteran to Be Buried at Arlington National Cemetery
November 29, 2017
Mueller Submits Report, Signaling Probe Has Ended
March 23, 2019

Trump Is Seeking a Broad Coalition in the Middle East
October 11, 2019

The Senate Majority Leader and his party would push through a Republican nominee while blocking a Democratic choice for one main reason: because they can. Source link Veterans In Defense Of Liberty - Vidol

How the Elitists Lost Britain

What the heck's happening in Britain? an American friend recently asked. You guys voted to leave the European Union, but you're still inside. Source link Veterans In Defense Of Liberty - Vidol