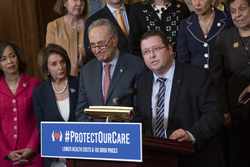 While we all brace for a potential World War III and the start of President Trump’s impeachment trial in the Senate, smart politicians are focused where it counts: health care.

On Thursday, Kansas became the latest traditionally conservative state to prioritize Americans’ health over partisan politics. Democratic Gov. Laura Kelly and Republican Senate Majority Leader Jim Denning have agreed to a Medicaid expansion that would cover up to 150,000 more people. In the spirit of compromise, Denning got a conservative priority in the deal. The version of the program that will head to a vote is one that makes it less likely anyone will drop their existing plans for Medicaid.

The outcome is a winner for Americans, but unfortunately compromise on health care is relegated to the state level. In Washington, Republicans continue to thumb their noses at addressing our health care challenges – at their own electoral peril.

Expanding access to quality, affordable health care will make Democrats big winners in 2020, just as it did in the hugely consequential 2018 midterms and 2019 elections.

As media pundits and Republicans continue to busy themselves with Nancy Pelosi’s impeachment articles strategy, the House speaker is overseeing some of the most consequential health care legislation since the Affordable Care Act was passed. These bills, often originating from members of the moderate New Democrat Coalition, put drug prices and shoring up the ACA front and center.

We all have access to the same studies and, yet, Republicans refuse to address the single most important issue to voters. GOP attempts such as the Better Care Reconciliation Act have fallen far short – too short to even get enough Republican support. And they have avoided town halls after health care votes.

Moreover, Democrats are not just focused on health care in general. They have a specific message that works: improving the Affordable Care Act.

A Third Way report found that health care proved to be far and away the most popular issue in Democratic ads in 2018. In swing districts, Democrats heavily leaned into protecting and expanding the Affordable Care Act — not promoting a single-payer system. In fact, more Democratic ads were run that explicitly opposed single-payer than supported it. Only two supported single-payer. These were run by Dana Balter in NY24 and by the Progressive Change Campaign Committee on behalf of Kara Eastman in NE02. Both of these candidates lost their races.

Sabato’s Crystal Ball confirmed these findings and issued a warning to Democratic presidential candidates to heed the results of 2018. Medicare for All is an issue best kept for safe districts, if at all. A diverse electorate does not support it. As the Kaiser Family Foundation points out in its Blue Wall Voices Project, Medicare for All turns off swing voters.

The new “Patients Over Pharma” campaign run by Restore Public Trust is ready to go with ads targeting Republicans for voting against Pelosi’s drug pricing bill and their close ties to the pharmaceutical industry. Are Republicans ready?

With nearly a year to go until the 2020 election, a lot is going to change. But the importance of the health care issue will not – and neither will the Democrats’ strategy.

Jessica Tarlov is head of research at Bustle Digital Group and a Fox News contributor. She earned her Ph.D. at the London School of Economics in political science.

Share This Post
Like it? Vote it up!
00
Previous Article'Richard Jewell,' Nicholas Sandmann and the Media MobNext ArticleBurrow, LSU Cap Heisman Season, Beat Clemson 42-25 for Title
You May Also Like
Lawmaker Calls for Ban on Partisan Ideology in Classrooms
March 16, 2019

NEW ORLEANS (AP) — Joe Burrow threw five touchdown passes, ran for another score and capped one of the greatest seasons in college football history by leading No. 1 LSU to a 42-25 victory against No. 3 Clemson on Monday night to win the national championship. The small-town Ohio kid turned

While watching Clint Eastwood's great new film "Richard Jewell," about the heroic security guard of the Atlanta Olympics who saved lives only to be savaged by the media mob, I thought about another innocent. Source link Veterans In Defense Of Liberty - Vidol