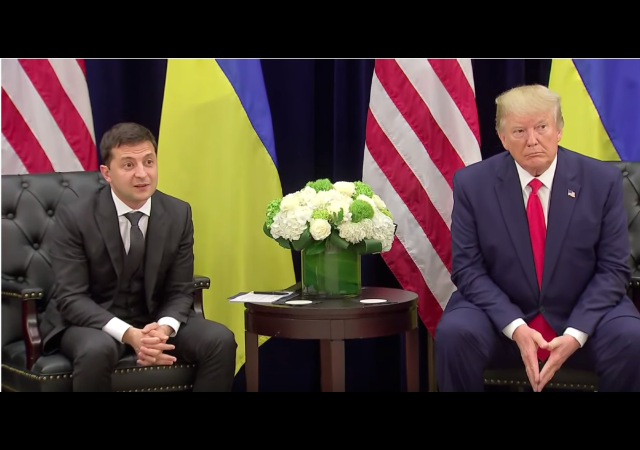 No wonder only hearsay appeared in the whistleblower’s complaint!

I’m not a conspiracy theorist, but this seems a little odd. Sean Davis at The Federalist reported that the intelligence community removed an important requirement when it comes to whistleblower information:

Between May 2018 and August 2019, the intelligence community secretly eliminated a requirement that whistleblowers provide direct, first-hand knowledge of alleged wrongdoings. This raises questions about the intelligence community’s behavior regarding the August submission of a whistleblower complaint against President Donald Trump. The new complaint document no longer requires potential whistleblowers who wish to have their concerns expedited to Congress to have direct, first-hand knowledge of the alleged wrongdoing that they are reporting.

The brand new version of the whistleblower complaint form, which was not made public until after the transcript of Trump’s July 25 phone call with the Ukrainian president Volodymyr Zelensky and the complaint addressed to Congress were made public, eliminates the first-hand knowledge requirement and allows employees to file whistleblower complaints even if they have zero direct knowledge of underlying evidence and only “heard about [wrongdoing] from others.”

The internal properties of the newly revised “Disclosure of Urgent Concern” form, which the intelligence community inspector general (ICIG) requires to be submitted under the Intelligence Community Whistleblower Protection Act (ICWPA), show that the document was uploaded on September 24, 2019, at 4:25 p.m., just days before the anti-Trump complaint was declassified and released to the public. The markings on the document state that it was revised in August 2019, but no specific date of revision is disclosed.

The whistleblower claimed Trump may have broken campaign finance laws because he threatened Zelensky he would withhold aid to Ukraine if he did not force the Ukrainian prosecutor general to investigate Vice President Joe Biden.

The phone call transcript showed no threats and just a suggestion, which Zelensky happily took into consideration.

You can read the background information on Biden and Ukraine from my earlier article. Biden bragged in 2018 that as VP he got then-President Petro Poroshenko to fire then-prosecutor general Viktor Shokin by threatening to withhold $1 billion in aid.

Biden and European leaders wanted Poroshenko to oust Shokin due to allegations of corruption. However, many suspected he did it because of Shokin’s investigation into Burisma Holdings, an energy company that employed Hunter Biden on its board of directors.

Shokin swore in a statement that Poroshenko fired him because of pressure from Biden over the investigation into Burisma.

I thought it was odd that the whistleblower’s complaint consisted of information via hearsay and he/she reading articles:

I guess this explains why that happened.

Davis asked an intelligence community official when they made the revisions and why. He never mentioned Trump or the whistleblower.

“The official said the intelligence community would not comment on anything to do with the anti-Trump whistleblower,” Davis tweeted.

It made sense why whistleblower information had to come first-hand. Allowing hearsay as the basis for a complaint would allow people to ruin someone’s career or lead to a boss firing an employee.

Ever play the game Telephone? Every single time the information got to the last person it was completely wrong.

The change allows the House Democrats to at least attempt their end goal: impeach Trump. They still cannot accept the fact that he won fair and square over their precious Hillary Clinton.

Share This Post
Like it? Vote it up!
00
Previous ArticleThe Dems Take a Swig from The Pickwick PapersNext ArticleChina’s Repressive Reach Is Growing
You May Also Like
What Democrats Have Forgotten About Citizenship
April 25, 2019

By Editorial Board, The Washington Post, 27 September 2019, Read the original article here.IT'S ONE thing to know that China runs a far-flung system of detention camps for Muslim Uighurs, a fact of which the world has been aware for the past two years. It's quite another to see that

The Dems Take a Swig from The Pickwick Papers

The Democrats, worried about being disappointed like Mrs Bardell in The Pickwick Papers, are pretending to see all manner of nefarious things Source link Veterans In Defense Of Liberty - Vidol