Maddow and others in the “Resistance Media” will find something else to peddle. Grifters gonna grift.

On March 14, 2017, less than a month after Donald Trump’s inauguration, Rachel Maddow and MSNBC hyped a big get. 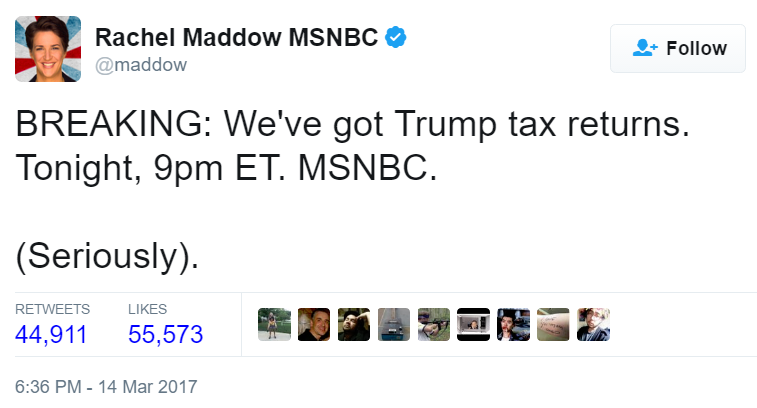 Before the tax returns were rolled out, Maddow and MSNBC began to walk it back. She had one tax return, from 2005.

When the 9 p.m. show started, Maddow filibustered and stalled, with a 14-minute monologue, with the big reveal coming only after a commercial break. It turned out she didn’t even have the full tax return, just the first two pages of the Form 1040.  In the time period she was stalling, The Daily Beast published the return results which already had been posted at another website. The results helped Trump, by showing the paid $38 million in taxes on $150 million of income. 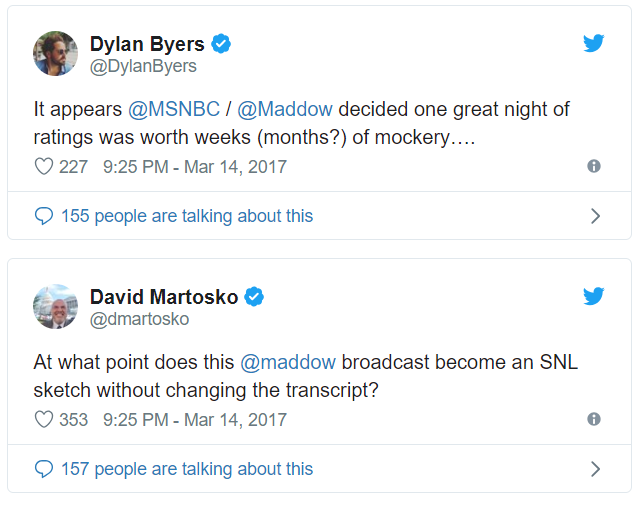 I thought for sure this would be the end of Maddow. She had embarrassed herself and her network to a huge audience stoked by the hype regarding her big scoop.

Rachel Maddow has a history of claiming big scoops which then flop.

There was the debunked 2012 big scoop about supposed GOP wrongdoing in Michigan. And the 2014 big scoop that the Koch Brothers were behind Florida groups pushing drug testing for welfare recipients, which was not true. We covered the Florida non-scoop big scoop, Rachel Maddow’s come undone with Koch Derangement Syndrome….

[The tax return scoop was] Just another embarrassing performance.

I was wrong about Maddow’s career committing suicide because I underestimated the willingness of the anti-Trump MSNBC audience to continue to buy into anything anti-Trump, despite having been burned.

With Trump has come Russia: two years of conspiracy-mongering about whether the president, a failed real estate mogul and reality TV star consumed with dubious deal-making, conspired with the Russian government to influence the outcome of the 2016 election. Robert Mueller’s determination that no evidence exists to prove Trump and Russian colluded to fix the election has exposed, once again, the venality of A-list political punditry. At the top of the heap is none other than MSNBC’s Rachel Maddow….

And Maddow, MSNBC’s ratings juggernaut of the Trump era, is the embodiment of this overzealousness. The Mueller investigation was covered more on MSBNC than any other television network, and was mentioned virtually every day in 2018. No twist was too minuscule or outlandish for Maddow; every night, seemingly, brought another nail in the coffin of the soon-to-be-dead Trump presidency.

There was the time Maddow theorized that Trump was “curiously well-versed” in “specific Russian talking points”, strongly implying press briefings were dictated from the Kremlin. An American missile attack on Syria, Maddow concurred, could have been orchestrated by Putin himself. During a cold snap, the Russian government could shut down our power supply. Putin could blackmail Trump into pulling troops from Russia’s border.

Maddow was not only certain that Russians had rigged the election. On air, she would talk about the “continuing operation” – the idea that the Kremlin was controlling the Trump presidency itself. In more sober times, this brand of analysis would barely cut it on a far-right podcast. In the Trump era, it was ratings gold.

Maddow is much smarter than this. But the siren song of ratings is too difficult for a TV personality ignore, especially when a television network is transformed from an also-ran into a top contender.

The Rachel Maddow Show was the No. 1 cable news program for the month of January [2019] across all relevant categories. TRMS averaged 3.29 million total viewers for the month, which is the largest total viewer delivery for a 9 p.m. show in the history of the network.

MSNBC also seems to have found something with Deadline: White House. Hosted by Nicolle Wallace, the show ranked No. 1 in total viewers during the 4 p.m. hour this month.

Despite broadcasting from remote locales, Morning Joe delivered the show’s best month ever when it came to total viewers (1.2 million) and beat CNN across the board in January. Compared to January 2018, Morning Joe was +14 percent in total viewers, whereas Fox & Friends was -10 percent and New Day was +4 percent.

Then conspiracy theory met reality, with the release of the summary of the Mueller report, including this direct quote from Mueller:

“[T]he investigation did not establish that members of the Trump Campaign conspired or coordinated with the Russian government in its election interference activities.”

In the days after the Sunday release, the viewership for Maddow’s show collapsed:

Rachel Maddow isn’t backing away from her coverage of President Donald Trump and any connection to Russia’s involvement in trying to influence the 2016 presidential campaign. The question is how much her fans want to listen.

Maddow’s audience has dipped on her two days back on the air since Attorney General William Barr reported that special counsel Robert Mueller had found no collusion between Trump and Russia’s efforts. Her audience of 2.5 million on Monday was 19 percent below her average this year, and it went down further to 2.3 million on Tuesday, the Nielsen company said.

So did the rest of MSNBC Trump-Russia conspiracy programs and CNN.

Even liberal publications are noting how this may signal the end of the spectacular rise of “Resistance Media.” The Atlantic notes:

These are turbulent times for Resistance Inc.

The Robert Mueller fetishization cottage industry is collapsing. Russia conspiracy theorists are frantically tweet-storming as though their life—or livelihood—depends on it. And across liberal America, cable-news obsessives and keyboard warriors who have spent years waiting for investigators to produce a presidency-ending bombshell are in a state of open mourning.

Like thieves caught with their hands in the cookie jar who loudly proclaim their innocence, MSNBC is in attack mode. I noted how Joe Scarborough whatabouts media malfeasance in Trump-Russia collusion debacle:

I took one for the team.

Monday morning, the first morning after the summary of the Mueller report was released, I watched CNN and Morning Joe on MSNBC. I did it again on Tuesday morning.

It was rough, like walking into an alternative universe where the inhabitants created their own narrative in which the media coverage of supposed Trump-Russia collusion was worthy of praise, or at least not criticism. I could only watch for a short time each morning. It was that unbearable….

If you thought the perpetrators of this media crime would be contrite, self-reflective, or sorry, you would be wrong. They have learned nothing. To the contrary, many of them have learned the wrong lesson.

Joe Pompeo Vanity Fair notes that there is a corporate-level decision to defend the network’s coverage, and the hosts are carrying out that policy:

In the face of this near-catastrophic setback, the MSNBC resistance bravely soldiered on. On the air that night, Ari Melber engaged in a spirited grilling of Trump attorney Jay Sekulow. Legal analyst Neal Katyal cautioned Chris Hayes not to view Barr as the final word on whether Donald Trump obstructed justice. Lawrence O’Donnell emphasized that “no one in the news media . . . has read a single sentence of the Mueller report.” Rachel Maddow, hands down one of the Mueller saga’s most voracious and detail-oriented chroniclers, kicked off her show with a monologue diving into 15 questions the Barr report left her with. “You knew it was gonna be this kind of night, didn’t you?” she began.

Is the drop in ratings the past few days the end of the road for Maddow and MSNBC conspiracy theorists? I thought that would be the case after the tax return debacle, and I was wrong. It’s risky to bet against the anti-Trump grifters. They will switch gears and find a new line of attack, some new conspiracy theory to get gullible liberals to watch.

Share This Post
Like it? Vote it up!
00
Previous ArticleTrump Is Badly Miscalculating on the Health Care LawNext ArticleCongress Should Ask Obama What He Knew About Russia Investigation
You May Also Like
Trump Signs Executive Order to Prepare for EMP Attack
March 29, 2019

What Now for Those Who Denied a ‘Crisis’ at the Border?
June 25, 2019
NYT Head Outlines Plans to Shift Trump Coverage from Russia to Race
August 17, 2019

Congress Should Ask Obama What He Knew About Russia Investigation

With President Trump now exonerated on allegations that he colluded with the Russians in 2016, thoughts turn to what President Obama knew and when he knew it. Add Sen. Rand Paul (R-KY) to the growing list of high-profile Republicans who want to know what President Obama himself knew at the time

Trump Is Badly Miscalculating on the Health Care Law

Every American knows someone and perhaps loves someone with a chronic illness. Now Trump has ensured that the threat to people with pre-existing conditions will be front and center in yet another campaign, writes David Axelrod Source link