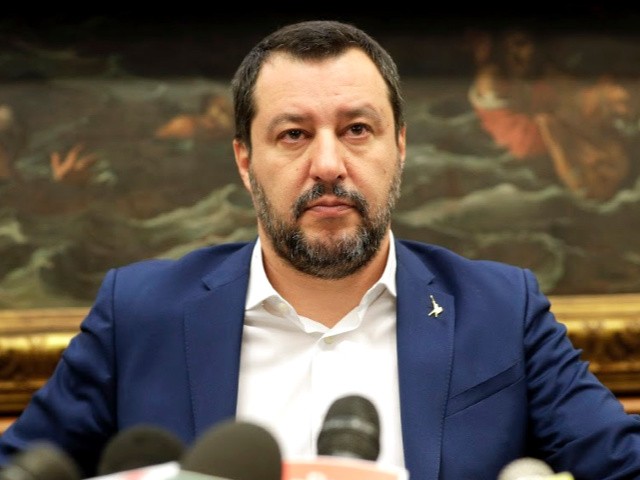 ROME — Italian Interior Minister Matteo Salvini has denied that there is opposition between himself and Pope Francis, saying that meeting the pope would be a “great honor.”

“Beyond some excessive polemics that I don’t share, I believe the occasions in which we collaborate [with the Vatican] are far more numerous” than cases of conflict, Salvini stated in an interview with the Italian magazine Oggi.

“Millions of Italians voted for me — for the most part, I believe, Catholics,” Mr. Salvini said. “I’ll defend the borders and suppress the traffic in human beings.”

“My duty is to make decisions, sometimes painful and difficult, but necessary to establish rules that benefit everyone,” said the interior minister, who ran for office on a platform of reining in rampant illegal immigration in the country.

While Mr. Salvini denied animosity toward the pope on his part, there has been plenty of hostility toward him from the Italian Catholic hierarchy, something Salvini has said he finds “bewildering.”

Asked last year how he explains the “unprecedented hostility” toward him from the Catholic establishment in Italy, notably the bishops conference and Catholic journals such as Famiglia Cristiana and Avvenire, who accuse the minister of xenophobia and racism, Salvini said he is perplexed.

“Honestly I cannot explain it,” Salvini said. “So much virulence leaves me truly bewildered.”

“There is a fundamental underlying prejudice that I cannot explain,” Salvini said. “The beautiful thing is that after the cover of Famiglia Cristiana and the attacks from Avvenire I received a flood of letters from men and women of the Church who include their names, surnames, and addresses, encouraging me to go on as I have been.”

“I have even gotten letters from priests and bishops,” he said, although many begged him to maintain their confidentiality to avoid problems. “This really surprised me. In politics, I’m used to it, but in a world of openness, dialogue, sobriety and its own way of being, I did not expect there to be such a climate.”

While never mentioning Mr. Salvini by name, Pope Francis himself has made harsh remarks universally understood as referring to the interior minister.

In a wide-ranging interview with the Italian daily La Stampa last week, the pope made no attempt to conceal his dislike for Salvini’s rhetoric or policies, going so far as to compare Salvini’s speeches to those of Adolph Hitler.

“Sovereignism” — the movement spearheaded in Italy by Mr. Salvini — reveals “an attitude toward isolation,” the pope said. “I am concerned because we hear speeches that resemble those of Hitler in 1934. ‘Us first, We…We…’ These are frightening thoughts.”

“A country should be sovereign but not closed. Sovereignty must be defended, but relations with other countries and with the European community must also be protected and promoted,” Francis said.

“Sovereignism is an exaggeration that always ends badly: it leads to war,” he said.

Share This Post
Like it? Vote it up!
00
Previous ArticleFredo Meltdown Is a Glimpse Into Chris Cuomo’s HatredNext ArticleElizabeth Warren Calls for ‘Affordable, Gender-Affirming’ Health Care
You May Also Like
Accused Illegal Serial Killer Given Green Card After Overstaying Visa
May 29, 2019
Trump Let the Dogs Out
May 27, 2019
Global Warming or Bad Data? Garbage in…
September 4, 2019
GM CEO Takes Less than Half a Percent Pay Cut Despite Mass Layoffs
May 4, 2019

Sen. Elizabeth Warren (D-MA) called for health care that is high-quality, affordable, and “gender-affirming” in a tweet posted Tuesday afternoon. However, she has not always held that position. Warren tweeted Tuesday that Americans are entitled to “high-quality, affordable, gender-affirming health care” and criticized the Trump administration for considering a proposal that

Fredo Meltdown Is a Glimpse Into Chris Cuomo's Hatred

What we have here is Cuomo once again embracing and encouraging political violence, just as he frequently does on his low-rated CNN show. Media Chris Cuomo's affection for political violence is again revealed in video of the basement-rated CNN anchor being heckled asRead Full Article » Source link Veterans In Defense