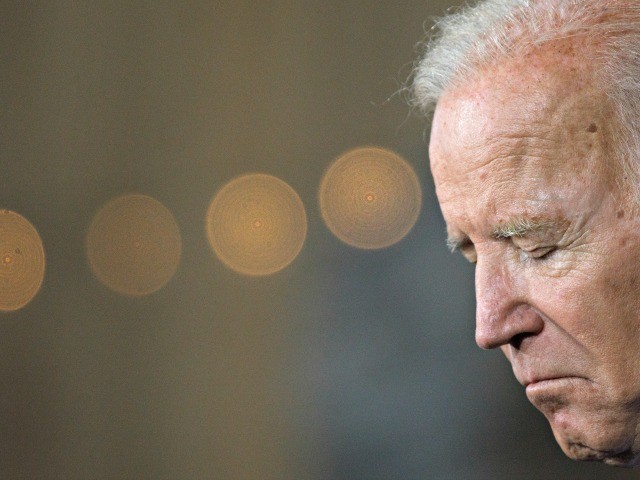 Joe Biden drew only 30 supporters to an event held at the same time as President Donald Trump’s massive rally in New Hampshire on Thursday.

The Eagle-Tribune, a local Massachusetts newspaper, reported the former vice president’s campaign only enticed “about 30 supporters” to attend an event held in Manchester, New Hampshire at the same time Trump was hosting his rally in the state.

“We are here because we are standing up to hate just down the road,” Biden’s New Hampshire organizing director told the handful of people that turned up for the event. “This is our moment, our chance. We need to talk to people now about what [Joe Biden] can do.”

Biden, who has retreated from the public eye after several high-profile gaffes consumed his campaign last week, did not attend the event himself. Despite the candidate not being present, the small crowd did display some energy, according to the Eagle-Tribune, especially when they chanted ‘Go, Joe! Go, Joe!’ in unison.

In comparison, Trump packed in more than 11,500 people for his rally at Manchester’s Southern New Hampshire University Arena on Thursday. A local fire marshal confirmed to the Daily Mail that the crowd was the biggest on record since Elton John held a concert at the venue in 2004.

Apart from the those inside the venue, the fire marshal estimated there were at least 8,000-to-9,000 more individuals that watched the rally from outside the arena.

Even before the number was confirmed, though, there were already signs Trump’s appearance in New Hampshire had galvanized widespread excitement. In the lead up to the rally, Breitbart News reported that vendors selling Trump memorabilia had already set up shop more than 17 miles away from the venue.

The disparate crowd size between Trump and Biden underscores the predicament facing the former vice president in New Hampshire. A recent poll out of the state indicates Biden has been dethroned from his frontrunner status by Sen. Bernie Sanders (D-VT). The shakeup comes as Biden’s campaign seeks to stabilize after a series of gaffes reignited doubts over whether he is up to the rigors of a modern presidential campaign.

On Thursday, Trump addressed the former vice president’s troubles with the crowd in New Hampshire.

“I don’t know, I think Sleepy Joe may be able to limp across the finish line,” Trump said before citing stories that Biden’s allies were suggesting he cut down on campaign events to limit gaffes.

“[T]hey are going to cut way back on his appearances because he is such a disaster, Trump said to laugher from the crowd. “Can you believe it? If I ever did that, it would be over. The fake news would get us, but we don’t let them get us.”

“Boy, he’s made some beauties, I sort of hope it is him,” the president added.

Share This Post
Like it? Vote it up!
00
Previous ArticleIsrael Allows Rashida Tlaib to Visit Her Palestinian FamilyNext ArticleNYT Head Outlines Plans to Shift Trump Coverage from Russia to Race
You May Also Like

Why the Left Moved From Loving Jefferson to Hating Him
October 2, 2019

Dems Must Be Careful Not to End Up With Worst of All Worlds
May 5, 2019
Netanyahu’s Victory Irks European Mainstream Media
April 12, 2019
California Prosecutors: Michael Avenatti to be Indicted on 36 Counts
April 11, 2019

The New York Times plans to shift its coverage of President Trump from whether he colluded with Russia to race, the paper’s executive editor Dean Baquet said during a recent staff meeting, according to a transcript of the meeting posted by Slate.com. “And I mean race in terms of not only

The Israeli government decided Friday to allow Rep. Rashida Tlaib (D-MI) to enter the country to visit her Palestinian relatives in Judea and Samaria (the “West Bank”). Tlaib and Rep. Ilhan Omar (D-MN) were denied permission to enter the country, under a 2017 law that bars those who support boycotts of