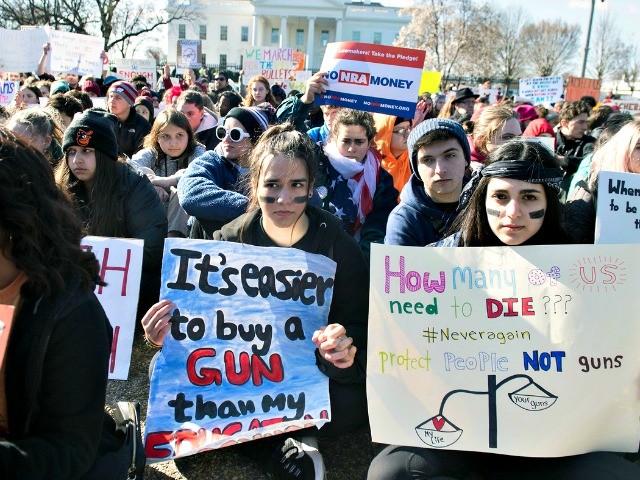 A Maine Republican sponsored legislation that would forbid teachers from endorsing political candidates and from using their classrooms as bully pulpits for ideological advocacy.

State Rep. Lawrence Lockman, co-founder and president of the conservative Maine First Project, introduced a bill that directed the state board of education to draft a Code of Ethics for K-12 teachers, based on model legislation from the David Horowitz Freedom Center.

Though the bill ultimately died, Lockman said the debate it stirred helped him call out not only the actual left-wing indoctrination occurring in classrooms, but also the willingness of establishment Republicans to go along with it for political purposes.

“Many of the complaints I’ve heard from parents here in Maine were prompted by the so-called ‘student walkout’ last year after the shootings in Parkland, Florida,” Lockman told Breitbart News. “Those demonstrations were overtly partisan and political, urging passage of more restrictive firearms legislation, and targeting any legislator endorsed by the National Rifle Association. Many teachers in Maine took an active role in promoting student participation in the protests.”

At Cape Elizabeth High School, Lockman noted that both teachers and school administrators helped organize the gun-control rally – even to the extent of changing the school schedule to accommodate the gun-control advocate who was the keynote speaker at the event.

“Testimony submitted to the Education Committee established that students across the state were used as pawns,” Lockman said, citing one person’s testimony: “Most didn’t know why they were walking out or that they were part of the Woman’s March agenda.”

The lawmaker said one parent testified, “This was a taxpayer-funded protest rally, pure and simple.”

“The assignment was to research the website We the Future, which describes only leftist causes including Black Lives Matter, gun control, open borders, the Women’s March,” the parent said. “Each student was to pick a cause and answer, ‘How can you get involved?’ I was shocked to see the teacher attempt to openly recruit students to support these causes.”

Lockman explained the leftist indoctrination has been getting a “green light” from Republican lawmakers in Maine as well.

In a column at the Freedom Center’s website, the state representative explained:

There’s abundant evidence that students in Maine’s K-12 government schools are being subjected to Leftist indoctrination in the classroom. “Progressive” teachers, administrators, and textbook publishers have been working overtime to ensure that students practice “correct thinking” on subjects such as racial guilt, gender identity, illegal immigration, and other controversial issues.

As soon as the Code of Ethics bill was referred to the Education committee for a public hearing in late February, all the usual suspects announced their opposition. The head of the statewide teachers’ union insisted that teachers never engage in political advocacy in the classroom, while the far-Left ACLU defended the right of teachers to do exactly that.

“Haar claims this proposed rule would institutionalize ‘white fragility,’ the most recent addition to the Leftist lexicon of identity politics, and a close relative of ‘white privilege,’” he wrote. “One can only imagine the level of racial scapegoating and educational malpractice that goes on in Haar’s classroom.”

“I struck a raw nerve in calling out the education establishment for pushing Leftist politics and ideology in the classroom,” Lockman told Breitbart News. “We had plenty of statewide TV, radio, and newspaper coverage, in addition to lots of traction on social media, and it was overwhelmingly in support of adopting a Code of Ethics for teachers.”

Lockman said he attributes the heightened public interest to the fact that most people either have children or grandchildren in the public schools.

“Many of these kids have been subjected to political indoctrination at school, and their parents and grandparents are fed up and frustrated,” he explained. “They saw that finally someone in the legislative branch of government was taking notice of the situation.”

Lockman said he has harnessed the energy created by the debate on his bill.

“My conservative nonprofit Maine First Project has launched the Forgotten Parents Initiative,” he said. “We aim to inform and mobilize parents at the local level, to help them push back against Leftist indoctrination in the classroom.”

“And we’ll be back with similar legislation at the earliest opportunity,” Lockman assured.

Share This Post
Like it? Vote it up!
00
Previous ArticleNarrowing The Field Of ViewNext ArticleConspiracy Theories
You May Also Like
Why We’re Celebrating the First Step Act After 3 Months
April 4, 2019
After forcing student to wash off Ash Wednesday cross, Utah teacher now on leave
March 9, 2019
Hispanic Caucus: DACA Not Enough, Need Amnesty for All
March 7, 2019

Climate Strike All About Indoctrination, Not Science
September 20, 2019
Abortion Advocates Are Losing. AL Gives Them a Lifeline
May 17, 2019

Narrowing The Field Of View