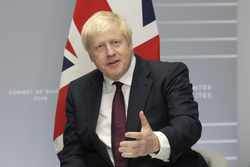 Facing a Parliamentary majority opposed to a hard Brexit — a crashing out of the EU if Britain is not offered a deal she can live with — Boris Johnson took matters into his own hands.

He went to the Queen at Balmoral and got Parliament “prorogued,” suspended, from Sept. 12 to Oct. 14. That’s two weeks before the Oct. 31 deadline Johnson has set for Britain’s departure.

The time his opposition in Parliament has to prevent a crash out of the European Union has just been sliced in half. His adversaries are incensed.

The speaker of the House of Commons called Johnson’s action “a constitutional outrage.” Johnson’s Tory Party leader in Scotland resigned. Labor Party Leader Jeremy Corbyn said Parliament will start legislating Tuesday to block Johnson. There is talk of a no-confidence vote in the Tory government.

One recalls the counsel Benjamin Jowett, Master of Balliol, gave his students: Never retract, never explain, just do it and let them howl! For Johnson has done what he was chosen, and pledged, to do.

Though he lacks a majority for a “no-deal Brexit,” his suspension of Parliament keeps faith with the hardline Tories who put their trust in him — that he would honor his commitment to get done by October’s end what the British people voted to do in 2016.

Whatever may be said of him, Johnson has shown himself as a man of action, a risk-taker, a doer, like Trump, who has hailed Johnson for the suspension. And leaders like Johnson are today shouldering aside the cookie-cutter politicians to dominate the world stage.

Matteo Salvini, interior minister, leader of the League party, and the most popular political figure in Italy, brought down his own government to force new elections he felt he would win. His ambition is to take the leadership not only of Italy but of the European populist right.

Salvini’s boldness backfired when the League’s ex-partner in the government, the leftist Five Star Movement, joined the Democratic Party to form a new government from which the League is excluded.

Yet Salvini, too, is in the mold of Trump and Vladimir Putin, who, when he saw a U.S.-backed coup take down the pro-Russian president in Ukraine, seized Crimea, home port of Russia’s Black Sea fleet since the 18th century.

These leaders are men of action not words. And their countrymen are cheering their decisiveness.

India’s Narendra Modi is in the mold. After reelection, he revoked Article 370 of India’s constitution that guaranteed special rights to the Muslim-majority in Kashmir, a state over which India and Pakistan have fought two wars. To effect the annexation of Kashmir, Modi sent thousands of troops into the disputed territory, imposed a curfew, shut down the internet and arrested political leaders.

When Prime Minister Imran Khan asked Trump to intervene on Pakistan’s behalf, Trump, meeting with Modi at the G-7, called it a matter between the two countries.

While autocrats appear ascendant, there is another phenomenon of our time: popular uprisings and mass demonstrations as shortcuts to political change.

These began to flourish with the Arab Spring in Tunisia and Egypt in 2011, the latter of which brought down President Hosni Mubarak after 30 years in power. The Cairo revolution and subsequent election brought to power Mohammed Morsi of the Muslim Brotherhood. This was intolerable to the Egyptian army, which executed a coup that led to new elections and the installation of the present ruler and former general Abdel-Fattah el-Sissi.

In 2014 came the protests in Maidan Square that led to the ouster of the pro-Russian government in Kiev and loss of Crimea.

This year saw mass demonstrations in Puerto Rico bring down the government in San Juan. In France, the Yellow Vest movement, rebelling against a fuel tax Emmanuel Macron imposed to cut carbon emissions, flooded the streets for months, demonstrating, rioting, even vandalizing the heart of Paris to get it repealed.

Then there is Hong Kong, a city of 7 million claimed by a China of 1.4 billion, where scores of thousands, even millions, have protested, blocked streets, shut down businesses and closed the airport.

The Hong Kong demonstrators are demanding what the 13 colonies demanded: freedom, liberty, independence. But as Xi Jinping is very much an authoritarian autocrat, the protesters are pushing their luck.

What motivates the democratic protesters and what propels the rise and welcome reception of the autocrats, the men of action, is not all that dissimilar.

Part of Trump’s appeal to his base is that people sense he feels exactly as they do. And they readily understand why Trump would not want to sit down at a G-7 gathering and gas endlessly about climate change.

Share This Post
Like it? Vote it up!
00
Previous ArticleAlyssa Milano Spreads Fake News About Trump Deporting Kids with Cancer: ‘Impeach This A**hole Now’Next ArticleEnd America’s Longest War the Right Way
You May Also Like

(Bloomberg Opinion) -- Almost 18 years ago in Afghanistan, a lifetime for some of the soldiers fighting there, the U.S. entered its longest war. It did so honorably, after terrorists sheltered by the then-ruling Taliban killed nearly 3,000 people on American soil.It must now strive for an exit that isRead

Actress and far-left activist Alyssa Milano shared a fake news story on Twitter about President Donald Trump deporting children with cancer, describing it as “indefensible” and a justification for impeachment. On Friday, NBC reported that Trump had ended “a policy that allows migrants to not be deported while they or their